Amid high-octane campaigning in West Bengal, several BJP candidates contesting the 2019 Lok Sabha election across the state have been allegedly targeted by the workers and supporter of the ruling Trinamool Congress party. 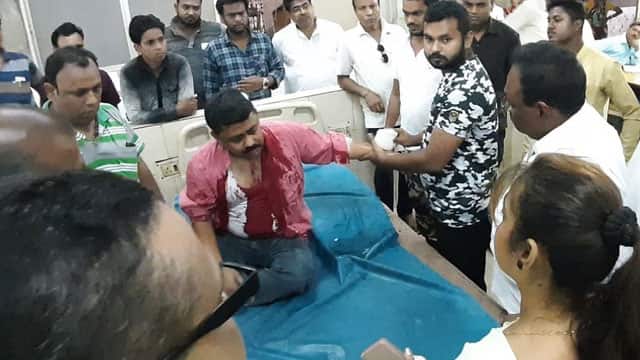 KOLKATA: Amid high-decibel campaigning in West Bengal, several BJP candidates contesting the 2019 Lok Sabha election across the state have been allegedly targeted by the workers and supporters of the ruling Trinamool Congress (TMC) party.

According to reports, BJP's candidate from the Dum Dum Lok Sabha constituency Samik Bhattacharya was attacked and his central election working office was allegedly ransacked by the TMC workers.

Charan was so badly beaten up that he was immediately rushed to a nearby hospital for treatment.

The BJP, which is trying to make inroads in the Mamata Banerjee-ruled state, has blamed the TMC workers for the recent attack on its candidates and workers.

Claiming the attack on its workers and candidates a handiwork of the ruling TMC, the BJP has threatened to file a complaint in this regard and demanded strict action the culprits.

During the second phase of 2019 Lok Sabha polls, violence was reported from several areas across West Bengal.

In Raiganj, the car of a CPI(M) candidate Md Salim was attacked when he went to a polling booth at Islampur in Uttar Dinajpur.

The ruling Trinamool Congress has denied the allegations of attack on BJP or CPM candidates and called it a tactic to defame the ruling party.

In view of reported clashes between the TMC and BJP workers, the Election Commission had deployed 194 companies of central forces to cover 80 per cent of the over 5,000 booths in the three Lok Sabha seats where polling was held in the second phase on April 18.