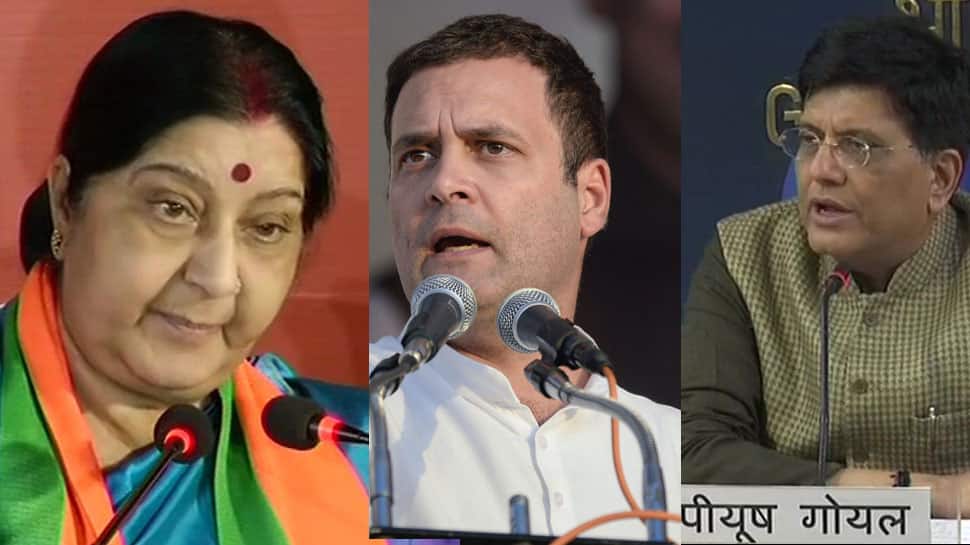 Taking strong objection to Rahul's comments, Union Minister of External Affairs Sushma Swaraj asserted that Advani is a father figure, adding that Rahul's words have hurt the party. She also asked Rahul to maintain the decorum of speech.

Swaraj took to Twitter saying, "Rahulji - Advani ji is our father figure. Your words have hurt us deeply. Please try to maintain some decorum of your speech."

Addressing a poll rally at Chandrapur in Maharashtra on Friday, Rahul had accused Prime Minister Narendra Modi of humiliating Advani.

He had said, "BJP talks of Hinduism. In Hinduism, guru is supreme. It talks of guru-shishya tradition. Who is Modi's guru? Advani. Joota maar ke stage se utara (Advani was kicked out from stage)."

Taking to Twitter the BJP leader said that the Congress leaders have become agitated, adding that they don't even realise the words they are using. He added that Indian culture teaches a person the proper behaviour to talk to the elders. He also accused that the Congress chief uses abusive language.

"It is unfortunate... The national president of a party who is trying to project himself as a future prime minister is using such indecent language. It is not a civilised way. It shows that the drama of hugging and then winking at colleagues in Parliament is their true face and the country has understood their hypocrisy. They have been exposed," Goyal said at a press conference at party headquarters.

Rahul's swipe at PM Modi over the treatment meted out to Advani followed the BJP patriarch's blog published on Thursday where he had said the BJP never considered its political adversaries as anti-national. The Congress chief's remark was a veiled reference to Advani not getting Lok Sabha poll ticket from Gandhinagar, from where the BJP has fielded party president Amit Shah instead.