The BJP has been dithering over the issue since Digvijaya Singh entered the fray three weeks ago. 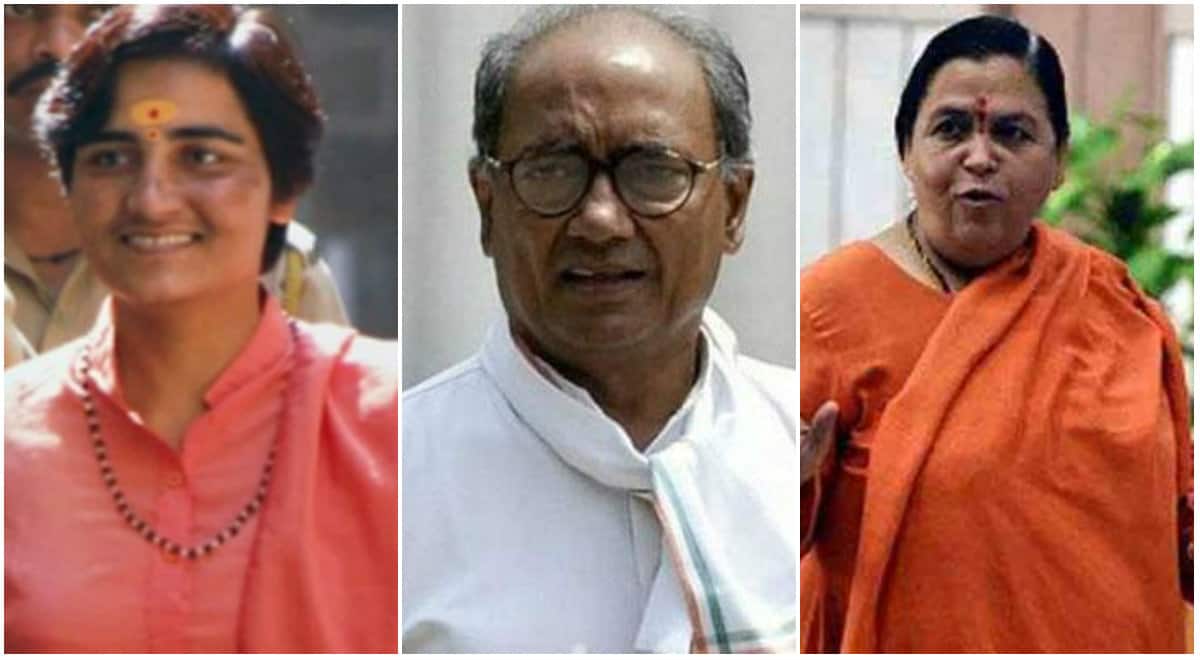 Bhopal: Bhopal may need to brace for a heavy dose of polarisation if RSS has its way in the selection of a challenger for Digvijaya Singh in the Lok Sabha elections. Hardliners Sadhvi Pragya Singh Thakur and Union Minister and former chief minister Uma Bharti are among the candidates being considered. The BJP has been dithering over the issue since Digvijaya Singh entered the fray three weeks ago.

Pragya Singh Thakur, who came to limelight after her arrest for Malegaon blasts in 2008, is another option. But her candidature is suspect because the special NIA court is yet to discharge her in the case. Pragya is keen to jump into the fray for what she calls "Dharma Yuddha" or crusade.

Uma Bharti had led the BJP to spectacular victory over the Congress in 2003. Digvijaya who was forced into a 10-year exile from electoral politics, became a synonym for Congress` failures. Many felt he became a key reason for the BJP`s decade-long tenure.

Bharti who had announced that she won`t contest for 17th Lok Sabha, came back into contention after Digvijaya Singh was named by the Congress. The earlier move to present a Thakur candidate was also dropped after Union Minister Narendra Singh Tomar opted to contest from Morena.

With presence of almost 25 per cent Muslims among 18 lakh voters, the large Bhopal seat can be won only by polarisation, feels the BJP. The earlier choice of senior RSS leader, Vishnu Dutt Sharma, was also with the same idea.

The BJP has been projecting Digvijaya Singh as an anti-Hindu leader. He has been going around all pilgrimages and had covered 3000 km walk along the banks of the Narmada. His views on RSS and the Sangh Parivar are quite radical. But he had opposed withdrawal of security from the RSS headquarters in Bhopal.

Bharti is no stranger to Bhopal constituency. In 1999, she had defeated the Congress candidate and former Union Minister Suresh Pachouri with a huge margin of 1.68 lakh votes.

Pragya Thakur denies having been approached for the contest. But she says she would be glad to challenge an anti-Hindu leader like Digvijaya Singh.

Pragya, who holds a Master`s degree in History, had been associated with Akhil Bhartiya Vidhyarthi Parishad (ABVP) and `Durga Vahini` or women`s wing of the Vishwa Hindu Parishad (VHP). She is known for rabble-rousing speeches.

Though the court dropped provisions of the Maharashtra Control of Organised Crime Act (MCOCA) against her, she is being tried under the Unlawful Activities Prevention Act (UAPA). She was granted bail by the Bombay High Court last year.

Six people were killed and over 100 injured when an explosive device strapped on a motorcycle went off near a mosque in Malegaon in north Maharashtra, on September 29, 2008.

The Congress hasn`t won Bhopal since 1989. The Bhopal constituency is a BJP citadel as the party has not lost the seat since 1989.

BJP`s sitting MP Alok Sanjar had won the seat in 2014 with a margin of 3.7 lakh votes. But after Congress named Digvijaya Singh, the BJP went into a pause mode.

The Congress had won three out of eight assembly segments of Bhopal Lok Sabha constituency. In the remaining five seats, the BJP witnessed a slide in its margin.

Digvijay continues his temple-hopping possibly to erase his anti-Hindu image.

During campaigning on March 29 in Sehore district, the former chief minister had remarked that the prosecution and defence had come together. As a result, those who were charged with terror were being let off by courts. He was referring to the acquittal of Swami Aseemanand and three others in the 2007 Samjhauta Express bomb blast case by a special NIA court.