Rajnath said the faith of the people on Prime Minister Narendra Modi's strong leadership has increased greatly in the last five years as they are aware of his work and performance. 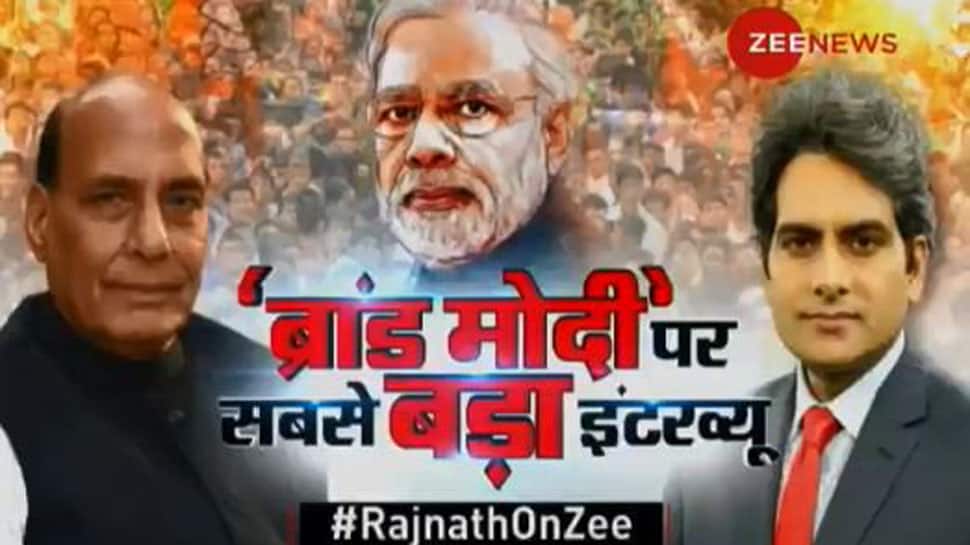 Indian Air Force's raids on terror camps in Pakistan's Balakot are not an election issue and the Bharatiya Janata Party (BJP) will eclipse its 2014 tally and win more seats in the 2019 Lok Sabha election, Union Home Minister Rajnath Singh said in an exclusive interview to Zee News on Friday. Rajnath said the faith of the people on Prime Minister Narendra Modi's strong leadership has increased greatly in the last five years as they are aware of his work and performance.

The senior BJP leader added that people look at a leader and party which works for the development of the country, and ensures its safety and security.

"The difference in 2014 and 2019 is that BJP will win more seats than the last election. People knew about Narendra Modi but they were not aware of his performance. Now they have seen how he works and performs. People want strong leadership. People have more faith in PM Modi's leadership in 2019 as compared to 2014. I don't believe that people do not vote on the development agenda. People look at a leader and party which works for the development of the country and ensures safety and security," said Rajnath Singh in the interview with Zee News Editor-in-Chief Sudhir Chaudhary.

Speaking on the February 26 airstrike by the IAF in Balakot, Pakistan, the union minister clarified that the raid is not an election agenda but it was an action against terrorism. He asserted that the airstrikes clearly highlights that the nation is in safe hands and Prime Minister Narendra Modi will always act against terror.

After the Pulwama terror attack, Rajnath Singh said that the government was restless but ready to act, stating that there was no doubt that the Indian forces will cross the Line of Control (LoC) and target terror camps inside Pakistan. Thanking the Army, IAF and the Indian Navy, Singh added that the surgical strike was well planned and executed.

He added that India will not hesitate to conduct more strikes on terror camps inside Pakistan if attacks by terror groups from across the border do not stop.

The BJP leader also said that the Indian forces attacked only the terror camps and not the Pakistani army and defence or its people. He added that the strike was carried out based on credible intelligence. He further added that India has never attacked any country but if challenged India will respond.

In a piece of advice to Pakistan, Singh said that if the neighbouring country is unable to stop terrorism then it can seek India's help in tackling the terrorists.

"Pakistan will have to mend its ways and stop exporting terror. If Pakistan is not able to stop terror groups, then it can seek India's help in tackling these terrorists," said Singh.

He added, "We should not politicise actions which make our country strong. We should congratulate the soldiers, scientists and leaders. This is not for politics."

The senior leader asserted that the anti-satellite missile test has put India in a league of four nations with such a capability.

Speaking on the Opposition, Rajnath Singh said that the BSP-SP alliance in Uttar Pradesh has no credibility. "This alliance was formed with a negative mindset just to stop PM Modi. Such alliances do not work. This alliance is unnatural and will not work. It can break anytime and it will happen soon," added Singh. He added that Congress has once again tried to fool the poor people of the country with its proposed NYAY scheme.