The TMC is banking on filmstar Mimi Chakraborty for a third consecutive win in Jadavpur, where party chief Mamata Banerjee had trounced Somnath Chatterjee in 1984. 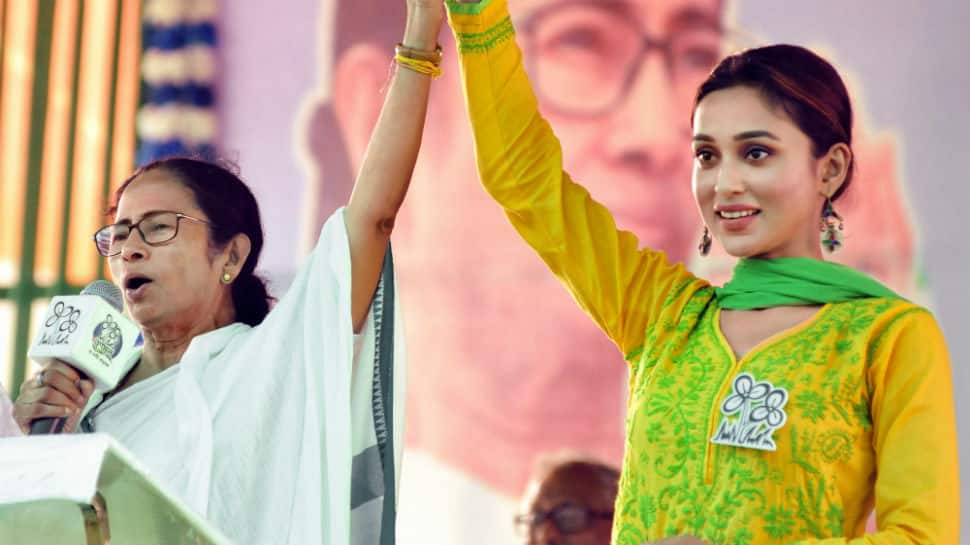 Jadavpur: The prestigious Jadavpur parliamentary constituency in West Bengal has never blessed a political party for a third consecutive term. Can the Trinamool Congress buck the trend?

As this question was posed to an elderly TMC worker, his mind flashed back to 1984 -- when a young woman leader defeated an erudite lawyer and Communist leader.

The script is somewhat similar in 2019, with the addition of a new actor.

The TMC is banking on 30-year-old Bengali filmstar Mimi Chakraborty for a third consecutive win in Jadavpur, where party chief Mamata Banerjee, then a feisty young Congress leader, had trounced CPI(M) veteran and noted lawyer Somnath Chatterjee in 1984.

And this time, TMC's Chakraborty faces a stiff challenge from another lawyer - former Kolkata mayor Bikash Ranjan Bhattacharya of the CPI(M).

The BJP, in a bid to win the seat riding on its growing popularity, has fielded Anupam Hazra, a TMC parliamentarian in the outgoing Lok Sabha who switched sides before the election.

TMC this time fielded Chakraborty in place of Sugata Bose, a Harvard professor who won the seat for the party in 2014.

Roadshows and meetings by the young actor-turned-politician in the constituency have drawn large crowds and the TMC leadership is claiming that the popularity of the candidate will be reflected in the results. They are asserting that she will win by a bigger margin than her renowned predecessor from the family of Netaji Subhas Chandra Bose, who won by a little over 1.25 lakh votes.
TMC had won the seat in 2009 too when singer and poet Kabir Suman was its candidate.

Infighting among local satraps in Bhangar area of the constituency is a cause of concern, however, but the TMC leadership is confident that the formidable election machinery of the party will work cohesively to ensure a resounding win for their candidate.

Polling for the constituency in the seventh phase of elections will be on Sunday.

The CPI(M)'s candidate Bhattacharya is the lead lawyer in both the Saradha and Narada cases for the petitioners, wherein the Supreme Court and the Calcutta High Court have ordered CBI investigations respectively.

Bhattacharya, however, is of the view that people's issues matter in the elections the most and not the individual who is contesting.

"The Left parties have an edge over others as no other party is talking about the basic issues affecting the people," Bhattacharya told PTI.

He also accused the BJP and the TMC of polarising the electorate on religious lines to sideline the issues of jobs, plight of industries and law and order affecting the common people.

Jadavpur spreads across south-eastern parts of Kolkata as also semi-urban areas in the vicinity and rural areas of Bhangar and Baruipur.

Hazra, a doctorate of philosophy in social work and a professor at Visva Bharati University, switched to the saffron party in January 2019 and was rewarded with a nomination from Jadavpur.

Hazra sounded confident of winning, saying, "People know that the Lok Sabha elections are for choosing the prime minister of the nation. Neither the TMC with its 20-odd or 30-odd MPs will make Mamata Banerjee the PM nor the CPI(M) will have any say as after the elections, as they will become non-existent," he said.

The BJP, which had just a 1.9 per cent vote share in the 2009 general elections in Jadavpur, got 12 per cent of the total votes polled in 2014 elections.

Congress has not fielded any candidate from the constituency this time.