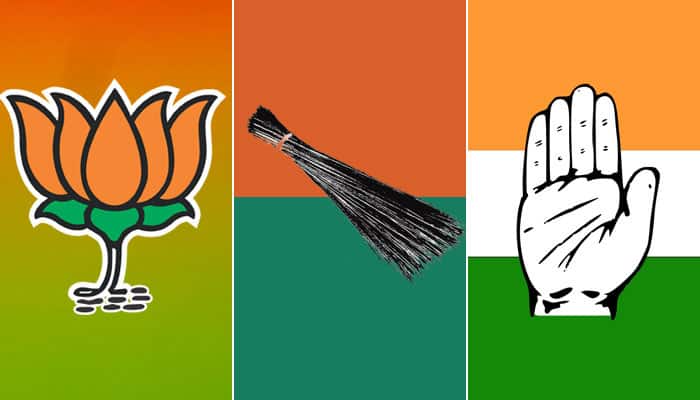 The BJP, Aam Aadmi Party (AAP) and the Congress have finally announced the names of their candidates for all seven Lok Sabha seats in Delhi, thus ensuring that the national capital will witness a three-corner fight in the Lok Sabha election.

The AAP and Congress held several rounds of talks to ink a seat-sharing arrangement in Delhi but the two parties failed to seal the deal. Experts maintain that the inability of AAP and Congress to fight together as an alliance will eventually benefit the BJP. It is to be noted that the saffron party currently holds all seven Lok Sabha seats from Delhi. In 2014, the BJP won 46.40% of the votes, while the AAP and Congress managed to win 32.90% and 15% vote respectively.

In Chandni Chowk, the BJP has fielded its sitting MP Dr Harshvardhan, while the Congress has given ticket to its former MP JP Agarwal and Pankaj Gupta is the AAP candidate. BJP has once again shown faith in its sitting MP from New Delhi, Meenakshi Lekhi, who faces Congress' Ajay Maken and AAP's Brijesh Goyal.

Delhi BJP chief and sitting MP Manoj Tiwari is again in the fray from Northeast Delhi and the contest on this seat is going to be very intense because the Congress has fielded three-time Delhi chief minister Sheila Dikshit from this seat. The AAP has given ticket to Dilip Pandey, who is also a well-known face and is expected to make things tougher for both Tiwari and Dikshit.

In South Delhi, Congress has given ticket to boxer-turned-politician Vijender Singh. The  boxer, who won medals for India in Olympics as well as Asian and Commonwealth Games, is pitted against senior BJP leader and sitting MP Ramesh Bidhuri and Raghav Chadha of AAP.

The BJP took the longest time to announce its candidate from North West Delhi parliamentary constituency and finally the party decided against giving ticket to its sitting MP Udit Raj. He has been replaced with popular Punjabi folk singer Hans Raj Hans. Rajesh Lilothia is Congress' candidate from this seat, while the AAP has fielded Guggan Singh.

In 2014, BJP had won all seven seats with huge margins while AAP, which had made a stunning debut in the assembly polls just five months back, failed to win even one. The Congress was completely routed as its seven MPs, including two Union Ministers, ended at third place in their constituencies, thus opening a window for the AAP to emerge as the main challenger to the BJP in Delhi.

Congress' Ramesh Kumar was in the third position with 1,25,213 votes. In East Delhi constituency, BJP candidate Maheish Girri, who debuted in electoral politics in 2014, defeated AAP's Rajmohan Gandhi by a margin of 1,90,463 votes.