Did Robert Vadra vote in Paraguay? Netizens jump at his Twitter faux pas

The flag of Paraguay has a red strip on top, white in the middle and blue at the bottom. It is also, and obviously, very different from the Indian national flag!

He meant to inspire fellow citizens to come out and vote in the sixth phase of Lok Sabha election 2019. He even showed his own inked finger. In the end, Robert Vadra was mocked incessantly online for using a flag of Paraguay instead of India in his 'inspirational' tweet.

Gurugram and Delhi voted in the sixth phase of Lok Sabha election 2019 on Sunday. Lakhs of people turned out to cast their vote and among them was Robert Vadra who, after exercising his franchise, fired a tweet urging others to reach their respective polling booths. "Our right our strength!! Everyone must step out n vote...we need all support, to create a combined future for our loved ones, n for a secular, safe, productive future for our country," he posted on his account on the micro-blogging site. And while there was nothing wrong - or controversial - in his message, it was the incorrect flag emoticon he used which outraged many. Vadra had made use of Paraguay's national flag instead of the Tricolour. And Twitter came out all proverbial guns blazing within seconds. 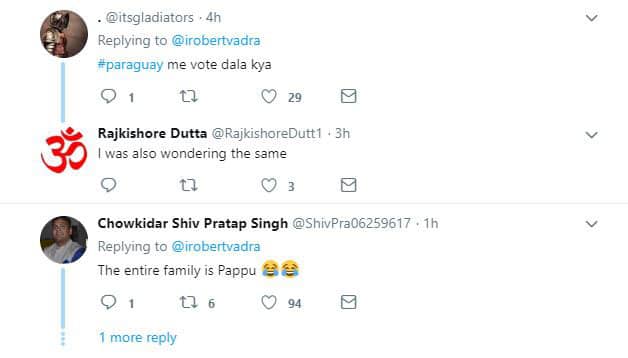 While it is an almost certainty that Vadra made the error inadvertently, many questioned how it took him several hours to realise his mistake. For someone with close to 40,000 followers on Twitter, Vadra would be better-advised to check his social media posts, then check once again, before putting it out for public consumption.