NEW DELHI: The second phase of the Lok Sabha election 2019, polling for which was held on Thursday in 95 constituencies, registered an estimated voter turnout of 69.04 per cent across 11 States and one Union Territory.

The second phase of polling was marred with sporadic incidents of violence across a few states including West Bengal.

According to the Election Commission, which released the estimated parliamentary constituency wise data for the second phase of 2019 Lok Sabha polls, Manipur recorded the highest turnout of 81.09 per cent, while J&K recorded the lowest turnout of 45.64 per cent. Manipur was followed by West Bengal where a turnout of  80.72 per cent was recorded. 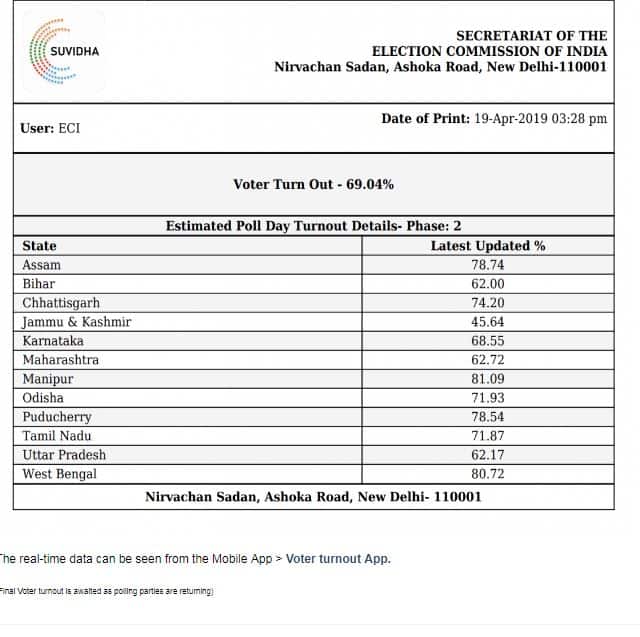 Tamil Nadu, which voted in without towering leaders Jayalalithaa and M Karunanidhi, recorded an average turnout of  71.87 per cent in the 38 constituencies. Polling in the Vellore constituency was cancelled due to the alleged use of money power to influence voters.

Besides, an average of 71.62% voters turned out to exercise their franchise in the 18 Assembly seats where by-polls were held simultaneously. The outcome in these seats along with four other constituencies, which will have by-polls on May 19, will determine the fate of the AIADMK government that is surviving on a thin majority.

Election to Tripura (East) was also postponed to April 23 because of security concerns.

Odisha recorded 71.93 per cent voter turnout during the second phase of polling held in five Lok Sabha and 35 assembly constituencies.

Bargarh Lok Sabha constituency recorded the highest voter turn-out of 77.57 per cent, while Aska posted the lowest voting of 66.30 per cent during the polling held on Thursday, according to an election official.

Voter turnout stood at 72.42 per cent in Bolangir parliamentary seat, while it was 71.44 per cent in Sundargarh and 72.88 per cent in Kandhamal, he said.

In Maharashtra, where polling was held across 10 constituencies, a voter turnout of 62.72 per cent was recorded, with Hingoli seat witnessing the maximum polling of around 66.60 per cent.

Fourteen seats in Karnataka also went to polls along with 10 in Maharashtra, eight in Uttar Pradesh, five each in Assam, Bihar and Odisha, three each in Chhattisgarh and West Bengal, two in Jammu and Kashmir and one seat each in Manipur and Puducherry.

Counting will take place on May 23.