PM said that the Congress works with a certain "modus operandi" to create false narratives on incidents such as Samjhauta Express blast. 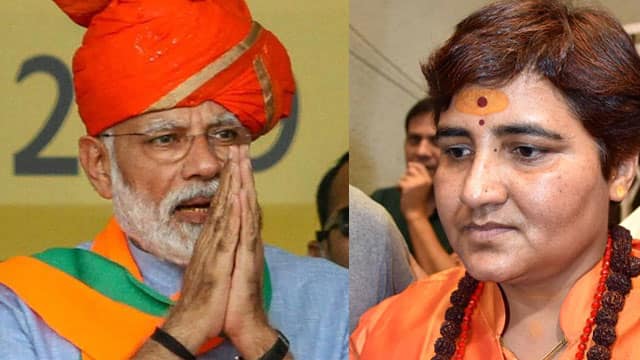 New Delhi: Prime Minister Narendra Modi on Friday said that fielding of Pragya Singh Thakur, an accused in the Malegaon blast case, as BJP candidate from Bhopal was a symbolic answer to all those who labelled the rich Hindu civilization as "terrorist" and asserted that "this symbol will prove costly for the Congress".

The PM said that the Congress works with a certain "modus operandi" to create false narratives on incidents such as Samjhauta Express blast and death of judge BH Loya.

While defending the fielding of Thakur, who is on bail in the blast case, PM Modi asked why no such questions are being asked when Congress president Rahul Gandhi and his mother Sonia Gandhi are contesting from Amethi and Rae Bareli constituencies, respectively, despite being on "bail".

"One woman, that too a `sadhvi`, was humiliated in such a manner," the PM said in an interview to a TV news channel while answering a question on fielding of Thakur in the Lok Sabha elections.

"Samjhauta Express verdict came. What came out? Without any evidence, a rich civilization as old as 5000 years, which gave the message of `the whole world is one`? You called such a civilization terrorist? To give a reply to all such people, this (fielding of Thakur) is a symbol and this symbol will cost Congress dearly," the Prime Minister added.

Thakur joined the BJP on Wednesday and soon after was fielded as its candidate from Bhopal against Congress leader Digvijay Singh.

The PM went on to add, "I have lived in Gujarat. I have understood the Congress modus operandi. Like a film script, they write a script. They locate something, then bring a villain and a hero and make a film. This is their modus operandi.. It is part of that modus operandi."

Attacking the Congress, he referred to the 1984 when the then Prime Minister Indira Gandhi was assassinated.

"Her (Indira`s) son (Rajiv Gandhi) said when big tree falls, the earth shakes. After that thousands of Sikhs were massacred in Delhi. Was it not terrorism of certain people? Even after that he (Rajiv Gandhi) was made the Prime Minister. The neutral media never asked any question with regard to that but is asking now," Modi said.

"Those who were eye witnesses of those killings were later made ministers.. One of them was recently made the Chief Minister of Madhya Pradesh, against whom there have been allegations. Were they ever asked? Those who have been convicted are being hugged even in jail," he said, and posed, "Do they (Congress) have any right to raise questions?"