Google marks beginning of Lok Sabha poll with a doodle

Google on Thursday marked the beginning of first phase of Lok Sabha poll in India with a doodle. 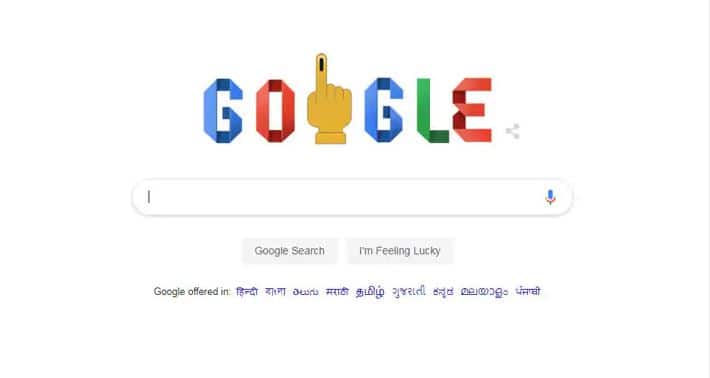 NEW DELHI: Google on Thursday marked the beginning of first phase of Lok Sabha poll in India with a doodle.

The Google doodle shows an inked finger and when a user clicks on the inked finger then the user lands on a page that explains the voting procedure. The page contains several information which are very helpful for first-time voters.

In the first phase on Thursday, a total of 91 Lok Sabha constituencies spread across 18 states and two Union Territories will go to polls.

Second polling official will ink your finger, give you a slip and take your signature on a register (Form 17A)

Record your vote by pressing the ballot button opposite the symbol of the candidate of your choice on the Electronic Voting Machine (EVM); You will hear a beep sound

Check the slip that appears in the transparent window of the VVPAT machine. The slip with the Candidate serial No., Name and Symbol shall be visible for 7 seconds before it drops in the sealed VVPAT box

You can press NOTA, None of the Above, if you don't like any candidate; it's the last button on the EVM

For more information, please see the Voter Guide on http://ecisveep.nic.in/

Mobile phones, cameras or any other gadget is not allowed inside a polling booth.