The other names doing the rounds for opposition's PM face are Rahul Gandhi, Mayawati and Mamata Banerjee. 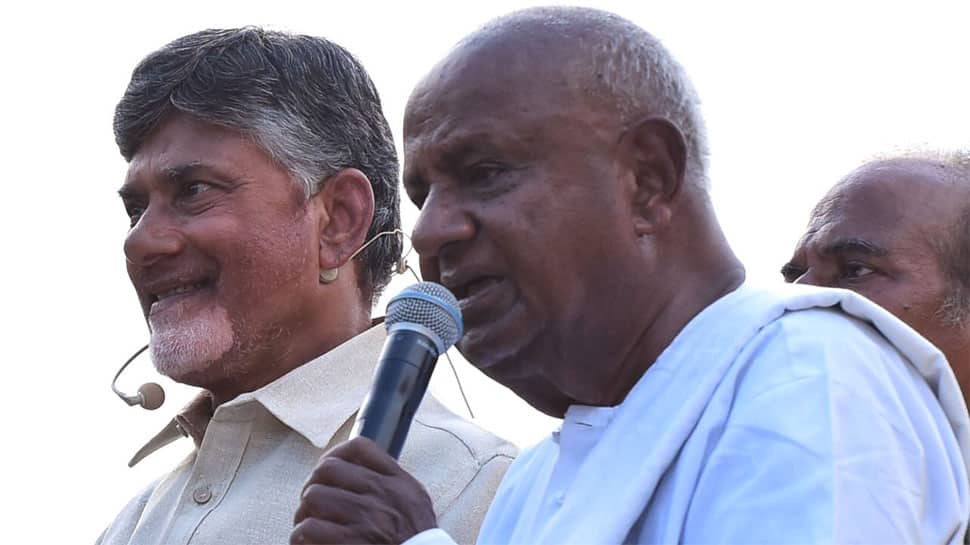 Dropping hints that Naidu could replace Narendra Modi in the upcoming Lok Sabha Election 2019, Gowda said the country is looking towards the TDP president's leadership. The JD (S) supremo said this while addressing two election rallies at Tiruvuru and Pamarru in Krishna district on Monday.

The former prime minister started his address at the first rally in Tiruvuru referring to TDP chief Naidu as "honourable Prime Minister" and then corrected it to "would-be Prime Minister”, reported news agency PTI.

"Who is going to challenge Modi is an issue. That has been going on in the media. Naidu is the person taking up the challenge saying 'I am only the person, I can challenge'," Gowda said.

"Naidu has taken the lead to fight Modi's undemocratic ways of destroying democratic institutions," he said.

Naidu, however, denied vying for PM's post. “I am not an aspirant for any post,” he said.

Last week, Bahujan Samaj Party (BSP) chief Mayawati hinted at her prime ministerial ambition, stating that she would use the experience gained as UP Chief Minister to give the "best government" at the Centre "if we get an opportunity".

"I have a lot of experience. I will use that experience at the Centre and work for people's welfare," said Mayawati, the four-time chief minister of Uttar Pradesh.

Speculations around West Bengal Chief Minister and Trinamool chief Mamata Banerjee as opposition's choice of prime minister in 2019 had gathered wind last year. Banerjee, however, shot down all rumours, saying the winning the elections and defeating BJP is the primary goal.

The opposition is not likely to name any prime ministerial candidate till the general elections are underway. Lok Sabha election 2019 will be held on April 11, April 18, April 23, April 29, May 6, May 12 and May 19.

"Our dream is for the country, what about you? Your dream is only power. Our prime minister will be Narendra Modi tomorrow also. And I want to ask the opposition to announce one name for the PM's post," said Thackeray.