While the chief minister, a nine-time MP from the area, is contesting an assembly bypoll, Nakul Nath is hoping to get elected to the Lok Sabha from Chhindwara. 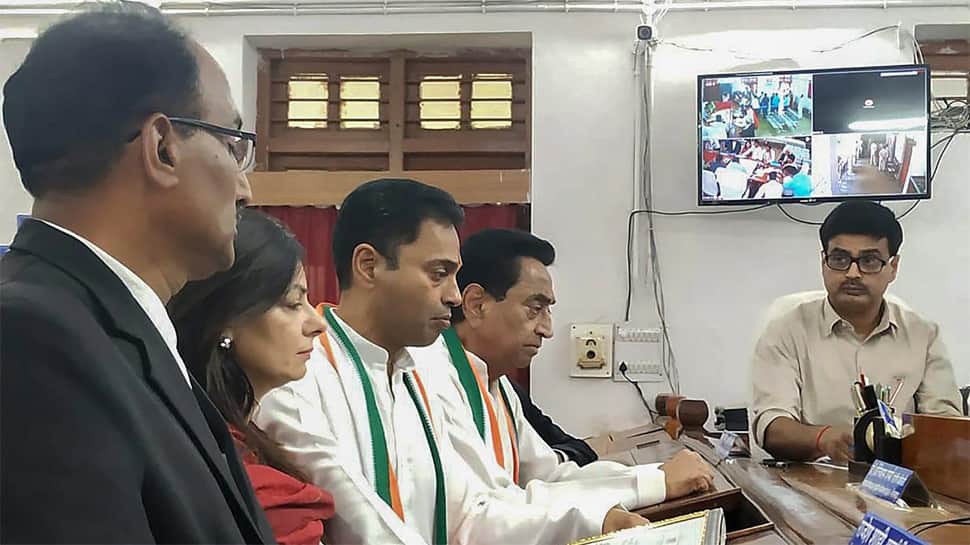 Chhindwara: Madhya Pradesh's new power centre is witnessing a unique father-son electoral show with Chief Minister Kamal Nath and his son Nakul in the fray, hoping to boost not just the Congress but also strike roots as deep as the tree from where this region takes its name.

While the chief minister, a nine-time MP from the area, is contesting an assembly bypoll, Nakul Nath is hoping to get elected to the Lok Sabha from Chhindwara, named after the wild date palm tree known as Chhind.

A Doon school product and an MBA from the US, Nakul Nath, 44, is making his debut in electoral politics. His chief minister father is also a debutant, contesting assembly polls for the first time in his 40-year career. Nath senior needs to get elected to the state assembly as he recently took over as chief minister.

While 14 candidates are contesting the Lok Sabha seat, nine contestants are in the fray for the assembly polls, said District Electoral Officer and Collector Srinivas Sharma.

Sharma told PTI that all arrangements have been made to ensure that voters get to press their choices on two different EVMs in Chhindwara on Monday.

Locals and political pundits are of the view that the contest in Chhindwara, which borders Maharashtra and is about 300 km from state capital Bhopal, is lopsided and both father and son will have an easy win as the seat has been Kamal Nath's stronghold for decades.

The duo's main contest is with the BJP, which has pitted former MLA Nathan Shah Kavreti against Nakul Nath, and local party leader and businessman Vivek Sahu against the chief minister.

"This is a historic election as it is the first time in the country that a son and father are contesting polls on the same day and in the same district. I seek your blessings as not your 'neta' (politician) but 'beta' (son)," Nakul Nath said at a rally in Ambada village near here recently as his father looked on.

Nath, 72, is leaving no stone unturned to ensure a handsome win for his son. He has been camping in Chhindwara city and holding six to seven rallies and meetings everyday, often beginning his day early on a blue Bell helicopter stationed right next to his home here in Shikarpur area.

It has been a family run campaign right through, said local Congress leaders.

Kamal Nath's wife Alka and daughter-in-law Priya have also been travelling from village to village to ensure the transition of the Chhindwara Lok Sabha seat from father to son is accomplished with a mega win.

The chief minister kept track of his work, clearing files early in the morning or late evening at his camp office across the road from his residence, an aide said.

The MP CM, also the state Congress chief, invoked his 40-year association with locals and his "development model that gave Chhindwara an unique identity" to seek the blessings of voters for his elder son.

"Tear Nakul's clothes if he does not deliver," he said at a rally, underscoring his familiarity with the electorate.

"He is your son and in any case I am behind him," Kamal Nath assured the gathering. The campaign seems to have hit home.

"Chhindwara has traditionally voted for the Nath family. Even if Kamal Nath had placed any of his trusted lieutenants to take his place, he or she would have won. Now that it is his son, people will feel they are voting for the father only," Sanjay Kumar, a hotel manager and resident of the city, told PTI.

The BJP's leaders fighting the father and son have, however, not lost hope and are determined to snatch the citadel.

Former legislator Kavareti invoked the recent income tax raids against the aides of Nath senior to say his campaign "is a fight between the poor and the mafia who have money".

"How did Rs 281 crore worth of unaccounted funds get detected? Whose money is it? It is the money of the poor and the deprived. I am sure of a victory," the tribal leader said, referring to the recent tax department's charges in the case.

Kamal Nath has denied the allegations.

His BJP colleague Sahu, who is vying for an assembly seat, invoked the "capable" leadership of Prime Minister Narendra Modi.

He added that he would ensure that the benefits of the Ujjwala scheme and housing for poor reaches the people here.

Arvind Uikey, an investment agent, said it would be interesting to see the margin of victory for the father-son combine.

"I think it will be a record of sorts either way. If Kamal Nath and Nakul Nath win by a huge margin, which looks to be the case, or even if they get defeated. But that is highly unlikely considering Chhindwara has seen development under the senior Congress leader," Uikey said.

The seat has been a Congress bastion since 1957. The only time the party lost it to BJP was in the 1997 by-election when BJP candidate Sunder Lal Patwa won.
Kamal Nath's wife Alka has also represented the seat once.