Rajiv Gandhi's tenure as Prime Minister was mired in several controversies. He faced public scrutiny for Bhopal disaster, Shah Bano case, the civil war between the LTTE and the Sri Lankan government, and Bofors scandal, the echo of which can be heard even till date.

Achieving a never before feat in Indian political history, Rajiv Gandhi had stormed to power in the 1984 Lok Sabha election by leading Congress to a 404-seat win of the 514 seats on which the election was held. He had taken over the mantle of the party and of the country, after his mother Indira Gandhi was assassinated while serving as the Prime Minister.

During the five years since he was sworn in as the Prime Minister, the once reluctant politician, Rajiv, had learned the nuances of the game. However, his tenure as the Prime Minister was mired in several controversies. He faced public scrutiny for Bhopal disaster, Shah Bano case, the civil war between the LTTE and the Sri Lankan government, and Bofors scandal, the echo of which can be heard even till date.

Despite massive rallies done by Rajiv Gandhi, the Congress failed to suppress the voice that the opposition parties were generating by speaking against the ruling government. While Rajiv Gandhi was the sole face of the Congress, the opposition parties had many noted and eloquent speakers at their disposal like Bhairon Singh Shekhawat, VP Singh, Atal Bihari Vajpayee, Lal Krishna Advani, Devi Lal, Chandra Shekhar in the North and Ramakrishna Hegde, NT Rama Rao and Karunanidhi in the South. Each leader in their own exclusive way reached out to the people of the country elaborating the follies of the government.

When the results were announced, only for the second time in India's electoral history, the collective opposition succeeded in bringing the mighty Congress down to its knees. From a landslide victory of 404 seats in the last election, the Congress was left wanting for even a majority in the 1989 election.

Led by Vishwanath Pratap Singh, more commonly referred to as VP Singh, of the Janata Dal (People’s) party, a five-party National Front national coalition was formed in 1988 to take down the Congress. These five parties were the Janata Dal, Telugu Desam, Congress (S), Asom Gana Parishad (AGP) and Dravida Munnetra Kazhagam (DMK). To rule out any chance of Congress gaining an upper hand, the opposition parties even agreed to field joint candidates for the Lok Sabha seats.

The Opposition cornered the government on corruption allegations like the Bofors bribery scandal as well as widespread violence and communal tensions. While Rajiv Gandhi's tenure was being scrutinised by a joint opposition, he maintained that the Congress was the only safe option for the country as the country would be unstable under opposition rule.

When the results were announced, the Congress (I) despite all efforts by the Opposition, emerged as the largest party in the Lok Sabha yet again. However, it failed to secure an absolute majority in the House. The Congress bagged 197 seats in the Lok Sabha, way less than the massive majority that it had achieved in the last election.

The party had named candidates on 510 seats of the 525 seats that went to polls. The result showed a clear divide between north and south India with the former opposing the party. The party suffered major losses in the North where it won just 15 in Uttar Pradesh, 4 seats in Bihar, 2 in Punjab and not even a single seat in Rajasthan. The fall is significant when compared to the 1984 election when the party won 83 in Uttar Pradesh, 48 in Bihar and 25 in Rajasthan. In the South, it bagged 27 seats in Tamil Nadu, 14 in Kerala, 39 in Andhra Pradesh and 27 in Karnataka. 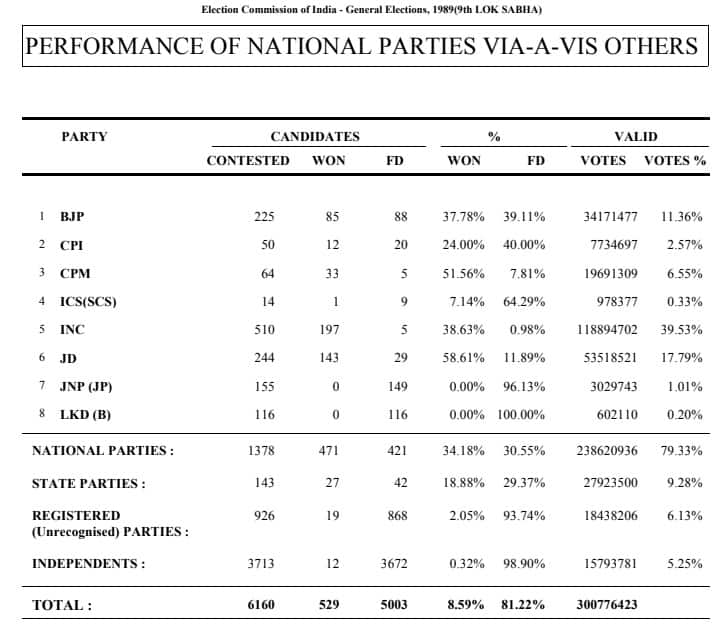 The combined opposition consisting of the Janata Dal, Telugu Desam, Congress (S), Asom Gana Parishad (AGP) and Dravida Munnetra Kazhagam (DMK) failed to achieve the magic number but joined hands with other parties from both right and left wing to attain the majority.

The Janata Dal bagged 143 of the 244 seats it contested on making major gains in Bihar where it won 32 seats, 54 in Uttar Pradesh and 16 in Odisha and 11 in Rajasthan. As part of the alliance, Congress (S) fought on 14 seats and won 9 of them.

Among the other parties with major gains was rightist Bharatiya Janata Party (BJP) which won 85 of the 225 seats it contested on, as opposed to just two seats that it bagged in the previous Lok Sabha election.

On 2 December, VP Singh, who led the National Front, took oath as the Prime Minister and thereafter named his Council of Ministers on 5 December.

The notable things in the election were that nearly 275 members were elected to the Lok Sabha for the first time. It was also the first minority government which was formed since independence in 1947.

Heading to the 1989 election, Rajiv Gandhi had major controversies to deal with. Just after taking over as the Prime Minister, he had to deal with the aftermath of the Bhopal gas tragedy which took place on the intermittent night of 2–3 December 1984 at the Union Carbide India Limited (UCIL) pesticide plant in Bhopal in Madhya Pradesh. Just going by the official figures given by the Madhya Pradesh government, 3,787 people died and at least 558,125 suffered injuries. Approximately 3,900 of these people sustained permanent injuries. However, other estimates claim that over 8,000 died within two weeks of the disaster. Voices seeking action against Union Carbide Corporation (UCC) were being heard from all quarters.

Parliament of India passing an act - The Muslim Women (Protection of Rights on Divorce) Act 1986 - that nullified the Supreme Court's judgment in the controversial maintenance Shah Bano lawsuit too was among the most controversial decisions taken by the Rajiv Gandhi government. Many Congress leaders were of the belief that if the government did not enact a law in Parliament against the Supreme Court judgment which ruled in favour of Shah Bano, the Congress would not be able to win the 1989 election. As per the Act, Muslim husbands need to give maintenance to a divorced woman only during the period of iddat or till 90 days after the divorce. However, the law faced criticism by opposition parties who claimed that the decision was taken under pressure of Muslim orthodoxy, to appease the minority community.

On the other hand, the Bofors scandal that hit the Rajiv Gandhi government in 1987, seemed to be the ammunition that the opposition parties were searching for ahead of the elections that were due in 1989. In April 1987, a story was unearthed in a Swedish newspaper which claimed that Swedish artillery manufacturer Bofors had paid kickbacks to several people in various countries including India to secure 410 Howitzer field guns. What was worse was that the middleman associated with the scandal, an Italian businessman Ottavio Quattrocchi, was allegedly close to Rajiv Gandhi's family.