The 1991 elections have also been referred to as the 'Mandal-Mandir' elections as the main two main focus points were the Mandal Commission report that was implemented in 1990 and the Rath Yatras being done for the demand of the construction of the Ram Mandir. 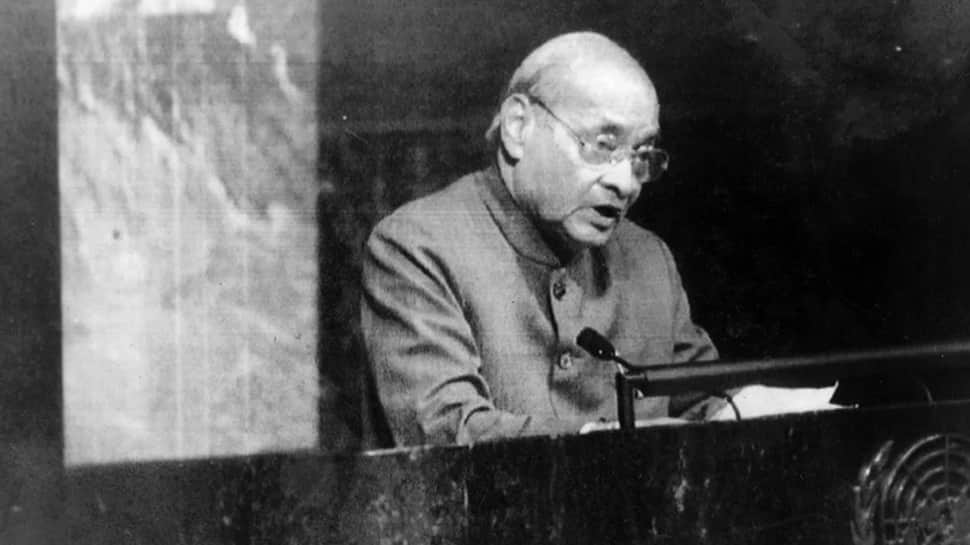 When the second coalition government in the history of Indian politics was formed with Prime Minister VP Singh in 1989, there were hopes that its outcome will be different from the Janata Party-led coalition that was formed in 1977. Alas, the fate of the two governments turned out to be not too different from each other.

The VP Singh led government that was formed in 1989 after a five-party National Front national coalition joined hands with other smaller parties to stitch an alliance at the Centre. The Janata Dal, of which VP Singh was a part of, had bagged 143 of the 244 seats it had contested on while the Bharatiya Janata Party which had given support to the alliance had won 85 seats.

During the time when VP Singh was the prime minister, Janata Dal succeeded in securing wins in Assembly elections in Haryana, Gujarat, Odisha, Bihar and Uttar Pradesh the party was in a coalition in Rajasthan and Kerala.

On the other hand, the Bharatiya Janata Party was solidifying its presence as a Hindu organisation laying focus on its demand for construction of Ram Mandir in Ayodhya. Since 1984, the Vishwa Hindu Parishad (VHP) had been holding Rath Yatras seeking the support of the Hindus to press for the permission to pray at the 'disputed' site. Subsequently in 1986, the then prime minister Rajiv Gandhi ordered that the gates of the structure be unlocked and Hindus too got the opportunity to pray there on a regular basis as opposed to an annual puja that was allowed earlier. VHP was also permitted to lay the foundation stone at the disputed site leading way to the communal tension that ensued in the following years.

Driving home its agenda of supporting the Hindus, the Bharatiya Janata Party (BJP) led by LK Advani threw its weight behind the Ayodhya campaign. The party had the demand in the election manifesto and once they won over 80 seats, Advani and embarked on a "rath yatra" to motivate Hindus to pray at the Ram janambhoomi-Babri Masjid site.

Trouble brewed for the VP Singh government when he and Bihar CM Lalu Prasad Yadav stopped Advani's yatra and arrested him alleging that the BJP leader was flaring up emotions which may lead to communal violence. After his arrest, the Bharatiya Janata Party pulled out its support from the government and forced VP Singh to resign.

Soon after his resignation, Chandra Shekhar along with 64 of his supporters broke away from the Janata Dal, formed the Samajwadi Janata Party (Socialist) and staked claim to form the government with outside support of the Congress. His government, too, however, just lasted for a few months as Congress pulled out its support and Chandra Shekhar had to step down.

The 1991 election was mainly fought between Congress (I), Bharatiya Janata Party and National Front. In a polarising environment, Rajiv Gandhi projected Congress as the only party which could bring unity and stability to India. The Congress campaigned for bringing the country's ailing economy under control through progressive liberalisation, the process of which his government had initiated when it was in power. The Bharatiya Janata Party, led by its chief Lal Krishna Advani, meanwhile advocated a deregulated economy based on self-reliance.

However, just on the next day while Rajiv Gandhi was on a campaign trail, he was assassinated at Sriperumbudur in Tamil Nadu. A woman from the crowd gathered to meet the former PM and as she bent down to touch his feet, she detonated an explosives-laden belt killing Rajiv Gandhi along with at least 25 others. 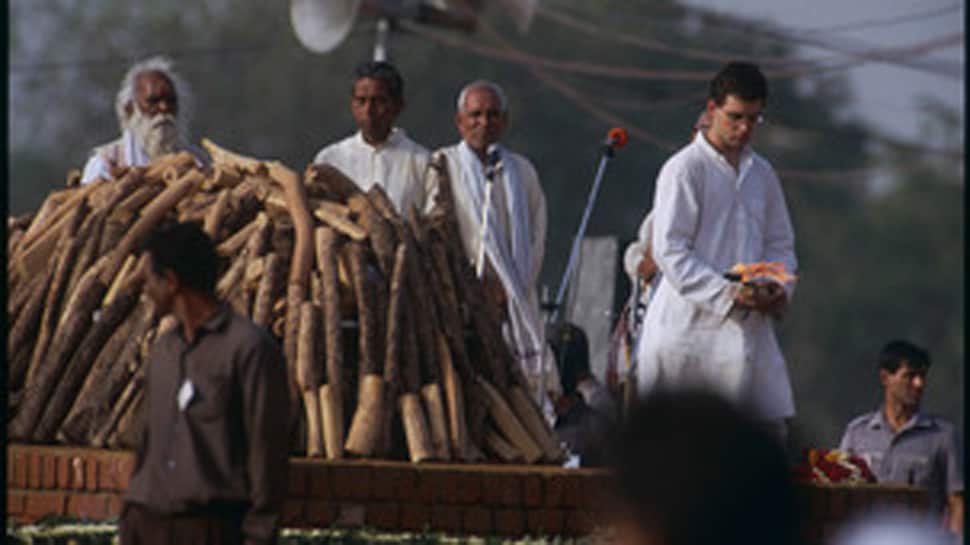 Voting in the following phases were postponed and later held on 12 and 15 June. When the results were announced, none of the parties won absolute majority. The Congress though emerged as the largest party winning 232 of the 487 seats it contested on. It was reported that in the 211 constituencies in which voting was held before the assassination, Congress could not perform well. However, in the two phases held later, the party made a comeback and became the largest party in the House yet again. It gained the maximum number of 38 seats in Maharashtra, 25 in Andhra Pradesh, 23 in Karnataka, 27 in Madhya Pradesh, 28 in Tamil Nadu and 13 in Odisha and Rajasthan each. It failed to make a mark in the Hindi heartland, winning just 1 seat in Bihar and 5 in Uttar Pradesh.

Having gained from the momentum over the Rath yatras, the BJP became the second largest party with 120 seats. Of the 468 seats it contested on, it won its maximum number of 51 seats in Uttar Pradesh, 20 in Gujarat and 12 in Madhya Pradesh.

The Janata Dal bagged 59 of the 308 it has nominated its candidates for making big gains in the Hindi belt. It won 31 seats in Bihar and 22 in Uttar Pradesh along with 6 in Odisha.

Among the other parties which participated in the election, Indian Congress (Socialist) won one seat and Janata Party won 5 of the 349 seats it contested on. 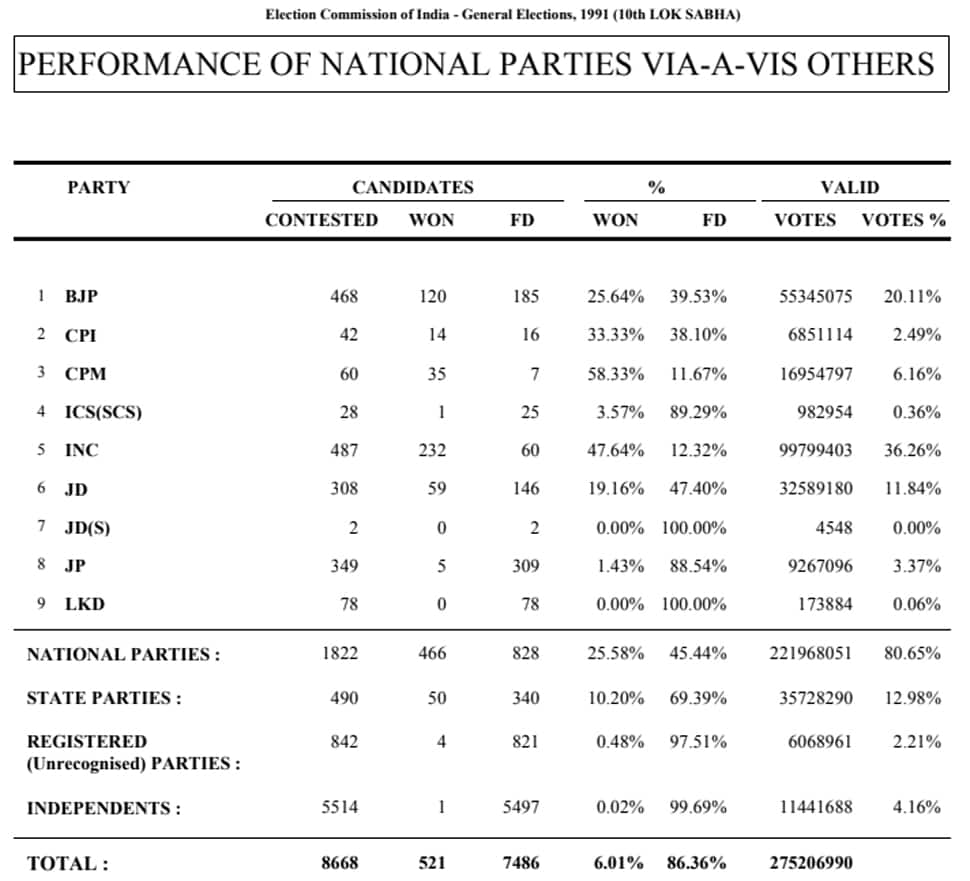 Of the 8668 candidates who had contested the election, 1822 were from national parties, 490 from state parties and 842 from unrecognised parties. A massive 5514 Independents also took part in the poll process of whom just one candidate won. The election witnessed approximately 53 per cent of voter turnout, the lowest ever in parliamentary elections held till 1991.

Though the Congress was in minority, it bagged the support of other parties and PV Narasimha Rao took oath as the Prime Minister on 21 June.

The 1991 elections were known as the 'Mandal-Mandir' 'Mandal-Kamandal' elections as the main focus of the parties was on the Mandal Commission and Ram Mandir issue.

The Mandal Commission traces back its origins in January 1979 when the then prime minister Morarji Desai appointed Bindeshwari Prasad Mandal to head the Second Backward Class Commission. By the time Bindeshwari Prasad Mandal submitted his report in 1980, Morarji Desai was no longer the prime minister and his successor Indira Gandhi gave extensions to the report but did not act on it. Then came VP Singh, who in August 1990 implemented the recommendations of the Mandal Commission as per which the Other Backward Classes were also (OBC) included in the reservation and a quota of 27 per cent was assigned for them in higher education and jobs. 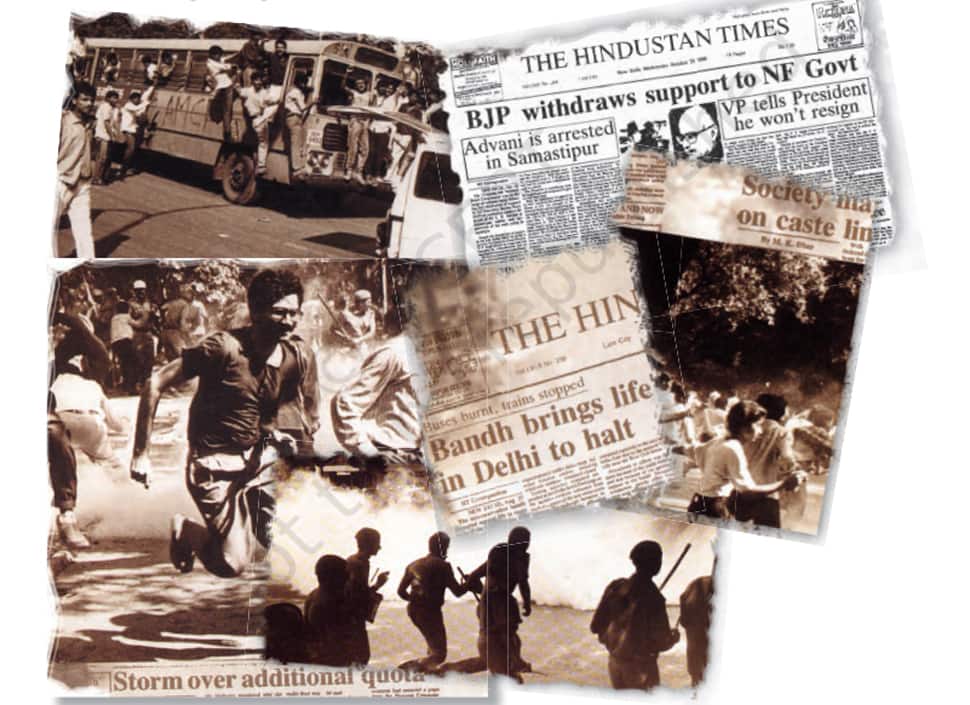 "It is certainly true that reservation for OBCs will cause a lot of heart burning to others. But should the mere fact of this heart burning be allowed to operate as a moral veto against social reform…. When the higher castes constituting less than 20% of the country’s population subjected the rest to all manner of social injustice, it must have caused a lot of heart burning to the lower castes. But now that the lower castes are asking for a modest share of the national cake of power and prestige, a chorus of alarm is being raised on the plea that this will cause heart burning to the ruling elite. Of all the specious arguments advanced against reservations for backward classes, there is none which beats this one about ‘heart- burning’ in sheer sophistry," the report had said.

As expected, the implementation of the report had led to several protests across the country, barring the South, with many students in and around Delhi even setting themselves on fire. The fire ignited with the reservation issue as well as the sensitive Ram mandir issue, were the two main focus points which defined the elections of 1991.