While Atal Bihari Vajpayee was the caretaker PM, the country got into a war with Pakistan in May after their Army infiltrated into India and captured Army posts in Kargil.

Soon after the Atal Bihari Vajpayee led National Democratic Alliance (NDA) government celebrated the first year in power in 1999, the All India Anna Dravida Munnetra Kazhagam (AIADMK) pulled the plug bringing the Central government down in just 13 months. The AIADMK chief J Jayalalithaa had been pressuring the Vajpayee government to remove all criminal cases filed against her by the Tamil Nadu government. However, when the Central government refused to do so, the coalition partner withdrew support. Shortly after, Vajpayee was asked to prove his majority in Parliament, which he lost by just one vote.

President KR Narayanan gave the main opposition Congress a chance to prove its majority but when the party failed, he called for early elections on 26 April. After the 1996 and 1998, the 1999 Lok Sabha election was the third parliamentary polls that were being held within 40 months.

The election was to be held in five phases from 5 September to 3 October 1999.

While Vajpayee was the caretaker PM, the country got into a war with Pakistan in May after their Army infiltrated into India and captured Army posts in Kargil. The bloody Kargil war that lasted till July led to the death of at least 527 Indian soldiers. Though Pakistan had initially denied its role in the conflict calling it India's face-off with 'Kashmiri freedom fighters', it later awarded its soldiers medals for the Kargil war in the admission of its involvement.

Pakistan had tried to use the US to intervene in the matter to stop the fighting and also help resolve the Kashmir issue. However, wary of the consequences of a conflict between two nuclear-armed forces, the US asked Pakistan to withdraw its troops from the LoC. Vajpayee's firm stance on dealing with Pakistan and not giving in under US pressure emboldened his image as a fierce leader.

The BJP was going into elections with a message of having dealt strongly with the Kashmir border crisis and with a more aggressive stance on defence and terror as well as neo-liberal economic policies. Congress, on the other hand, maintained its pro-liberalisation stand on disinvestment and economic policy. However, the real talking point of the election were the two faces on either side - Vajpayee for the BJP and Sonia Gandhi for the Congress.

Sonia had entered the political space officially as Congress president in 1998 but she was fighting her first election in 1999. She decided to contest the election from two seats - Bellary in Karnataka and Amethi in Uttar Pradesh. While she was preparing for the electoral battle, Sonia was also facing an opposition from within the party where veteran leaders like Sharad Pawar, PA Sangma and Tariq Anwar questioned her right to become the prime minister, if the party won, owing to her foreign origins. The internal challenge was to such an extent that she offered her resignation as the party chief. However, the major chunk of the party sided with Sonia and the three rebels were expelled. The three leaders later went on to form the Nationalist Congress Party.

The 'videshi' barb at Sonia was the ammunition that BJP needed to get an edge in the election. The saffron party portrayed the fight between the 'swadeshi' Vajpayee and 'videshi' Sonia.

As Vajpayee had predicted in his last speech in Parliament before resigning as the prime minister in April 1999, the BJP made up for the one-vote loss that it had suffered earlier in the year while proving the majority in the House. The 1999 election results tilted in the favour of the over 20 party coalition - NDA - with BJP in the lead.

(Read the tally of parties in 1998 Lok Sabha election)

The counting of votes which began on 6 October gave the NDA 298 seats while the Congress and its allies bagged 136 seats. Of the NDA coalition partners, the BJP secured the maximum share of 182 seats. While the number of seats that the BJP won in 1998 and 1999 elections remained the same, the seat share of the party in various states differed. The party which won 57 seats in Uttar Pradesh in 1998, bagged 29 seats in the 1999 election and won 7 seats in Karnataka as opposed to its 1998 tally of 13. In all the other states, the party fared better than the previous election despite having fielded a lesser number of candidates overall. In both Rajasthan and Maharashtra, the party won 11 and 9 seats respectively more than the previous election.

The Congress, on the other hand, bagged 114 seats - 27 less than its previous tally. However, it gained 11 seats in Karnataka and made its foray back into Uttar Pradesh by winning 10 seats. It lost a major share of seats in Andhra Pradesh, Maharashtra and Rajasthan winning 5, 10 and 9 seats as against 22, 33 and 18 in the last election.

The Bahujan Samaj Party (BSP), which played a crucial role in the BJP losing its vote of confidence earlier in the year, won 14 seats out of the 225 it contested on. The party had improved its tally from the last election where it had bagged just 5 seats. 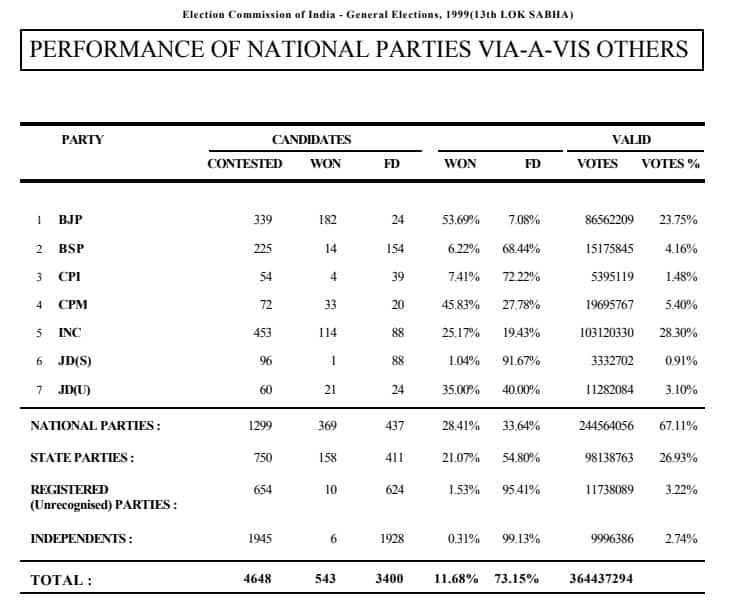 Though Congress failed to create a dent in BJP-led NDA's image, Sonia won from both the Bellary and Amethi seats that she contested on. However, she chose to represent Amethi.

The NDA with 298 seats came back to power defeating Congress and its allies which bagged 136 seats. Vajpayee was elected as the prime minister for the third time and took oath along with his colleagues on 13 October 1999.