The first ever Lok Sabha election in the country was held in 68 phases for 489 seats from 25 October 1951 to 21 February 1952. With 44.99 per cent votes, the Congress staged a massive victory in the polls overshadowing all the others in the race for a seat in the House.

India is arguably one of the most remarkable democracies in the world. With the largest electorate, the voters of the country belong to varied races, religions, castes and tribes. To elect a government for a nation so large and diverse in no mean task. The voting and the overall poll process today, looks extremely organised, but do you know how things were when India voted for the first time ever in the 1951-1952 elections?

The country adopted its Constitution on 26 November 1949 thereafter which the Constituent Assembly continued to act as interim Parliament till the elections were held in 1951-52. Headed by Jawaharlal Nehru, the interim Cabinet had 15 members from various parties. In the run-up to the first general elections in 1951-52, several members of the Cabinet stepped down from their posts and formed their own parties to fight the polls.

The first ever Lok Sabha election in the country was held in 68 phases for 489 seats from 25 October 1951 to 21 February 1952. With 44.99 per cent votes, the Congress staged a massive victory in the polls overshadowing all the others in the race for a seat in the House. Of the 489 seats, 364 Congress candidates won and went on to form the first elected government in Independent India. On 17 April 1952, the first Lok Sabha was constituted with Jawaharlal Nehru leading the Congress government as the prime minister.

The party won the maximum numbers of 81 seats in Uttar Pradesh, 45 in Bihar, 40 in Bombay. Here is how the Congress fared state-wise in the election:

The Communist Party of India (CPI) came a distant second in the list of winners bagging 16 seats of the 49 on which it contested. The only other party apart from the CPI which managed to get a double-digit figure was the Socialist Party, led by Ram Manohar Lohia and Jayaprakash Narayan, with just 12 seats of the 254 on which it contested. Among the other winners were 34 candidates belonging to other state parties and 37 Independent candidates.

A total of 1874 candidates from 53 parties and other independents fought for the 489 seats in the polls. Out of these, 14 national parties nominated 1217 candidates for the polls. Apart from these, there were 39 state parties from which 124 candidates contested the polls. There were names of 533 independent candidates also on the ballot papers from across the country for the voters to choose from. 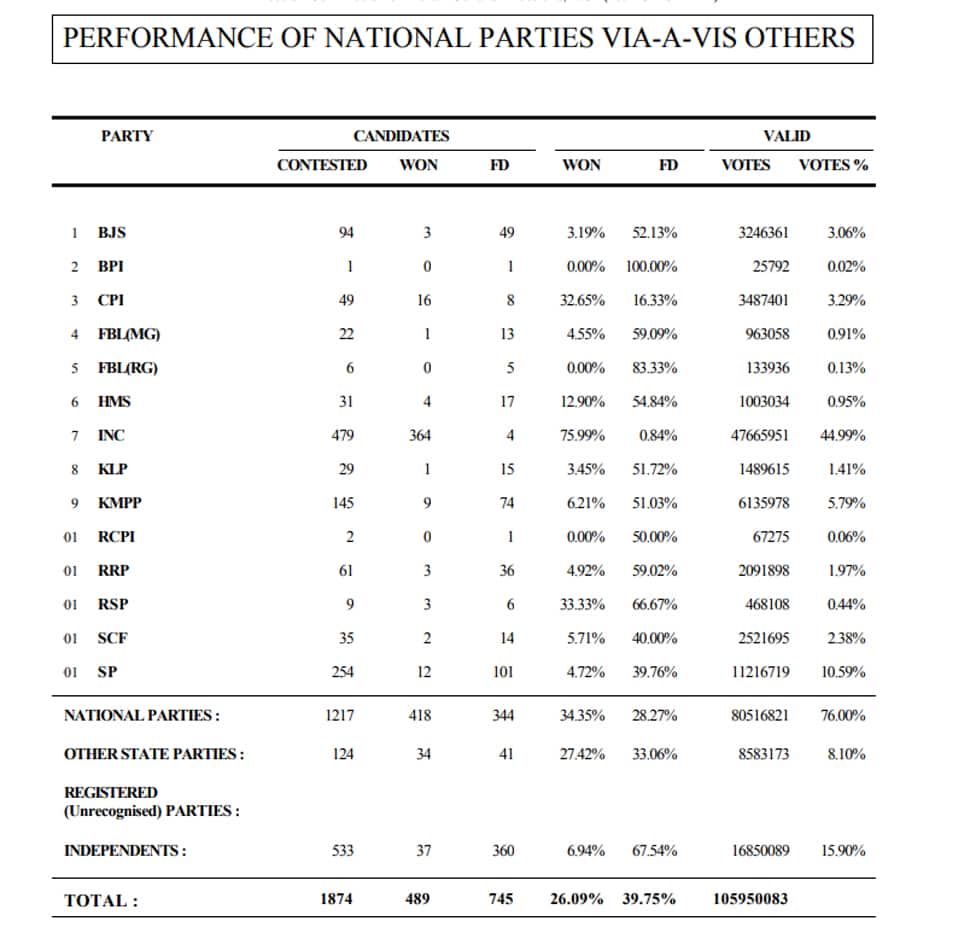 While Congress emerged with a landslide victory, Nehru faced a challenge from his former colleagues Shyama Prasad Mookerjee and Dr BR Ambedkar. Mookerjee formed the All India Bharatiya Jana Sangh on 21 October 1951 and Ambedkar opposed through his All India Scheduled Castes Federation. However, neither of the two parties could dent the mighty Congress and managed to bag just three and two seats in the election respectively. Other national parties included Kisan Mazdoor Praja Party which bagged 9 seats; People's Democratic Front (Hyderabad), which played a key role in Telangana Rebellion movement, won 7 seats of the 25 seats it contested on; All India Ganatantra Parishad which won 6 seats among other parties.

The first cabinet under Prime Minister Jawaharlal Nehru had before itself the herculean task of nation building and forging the way forward. Here, they take a break to enjoy a meal together. #INCHistory pic.twitter.com/fDYbjRvYsF

Despite having contested in huge numbers, all these parties stood pale in comparison to the Congress which covered the majority share of the first Lok Sabha. The party which till date recognises itself as secular, back then had the support of both the high-caste and low-caste Hindus as well as the Muslims.

The dominance of the Congress, which was founded in 1885, was not just limited to the 1951-52 Lok Sabha election. The era of the grand old party prevailed almost unchallenged in terms of the numbers in the House from India’s Independence up until 1977.