Inkredible India: The story of 1957 Lok Sabha election all you need to know

Despite numerous - and sporadic - grievances against the Indian National Congress at the time, the party remained the biggest political force to reckon with - made even more powerful due to the lack of a credible and worthy opponent. The outcome of the Lok Sabha election 1957 proved that Nehru's reign was here to stay. 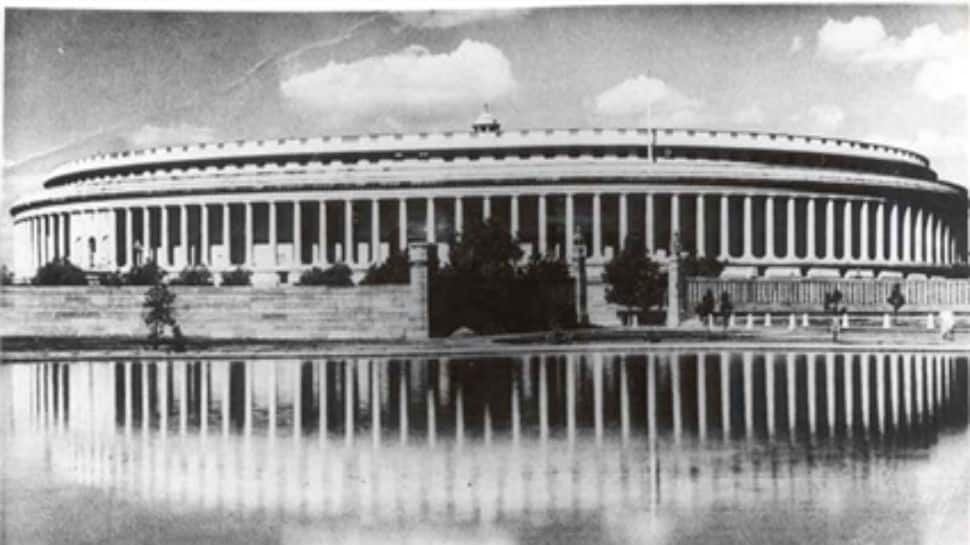 A decade since independence, India had had some vital and valuable experience of what it takes to be a democracy. While one party – Indian National Congress - was still overwhelmingly dominant in the political framework of the country, people at large were beginning to take note of what elections are all about and – to an extent – how their vote could possibly count.

The experience of having had Lok Sabha elections from five years ago, however, was one of the biggest advantages ahead of 1957 Lok Sabha election. That men and matter from the previous elections were used to a large extent also helped bring down expenditure massively.

The INC was expected to dominate once again but that elections were being ingrained as a firm component of the Indian democracy was noteworthy. This was especially significant because of what was happening in the immediate neighbourhood.

A constitutional coup in Pakistan in 1953/54 had exposed how General Ayub Khan had a mighty say in the politics of the country when he helped Governor General Ghulam Muhammad in dismissing Khawaja Nazimuddin’s government.

Early of signs of political instability in Pakistan aside, India still had challenges of her own. How to reach more and more people in the country? How to convince people to come out and vote? How to update people on the voting process? The Election Commission at the time had to, once again, work overtime to address issues and challenges galore.

As mentioned previously, Indian states had been reorganised on linguistic lines.

Lok Sabha election 1957 was conducted in a total of 17 states and union territories. These were:

The average number of contestants per constituency was about three and it was a number that remained – more or less – constant till the elections in 1977.

In a total of 494 seats, there were 91 double-member constituencies. The weakness of multi-member constituencies, however, had been realised and recognised immediately after the previous election. According to an Election Commission report on the 1951/52 elections and published on record by Nuffield College (Oxford University) in an analysis, it was mentioned that a large number of people cast all their votes into the ballot boxes of the same candidate, resulting in cancellation of all but one vote. An EC report on the 1957 elections did give a state-wise breakdown of votes rejected because of cumulative voting and other reasons. 95.7% of three million votes rejected in these elections was because of cumulative voting.

The dominance of Congress was here to stay with only three other national parties – Communist Party of India, All India Bhartiya Jan Sangh and Praja Socialist Party – contesting the 1957 elections. In fact, the total of 15 political parties is the lowest number of parties to have ever contested in the Lok Sabha elections.

The other state parties in the 1957 elections were:

While Congress was confident of yet another resounding performance in the elections, the other parties – national and state – were scampering for what little they could hold on to.

In a report published in Far Eastern Survey in the same year, James R Roach – a veteran of WW2, a distinguished professor in international relations and a cultural attache in the American embassy in New Delhi – summed up the strategy of the contesting political parties. “All the opposition parties made what use they could of many local grievances and of widespread local Congress failings: unemployment, food shortages, rising food prices, higher irrigation rates, dissatisfaction with states reorganisation, corruption and nepotism at local and state levels, the slow rate of development and (in some states) the slow pace of land reform settlement, inefficient state and local administration, southern feeling that the north dominates and is favoured by the government, evidence of caste considerations in local Congress politics, growing Congress acceptance into membership of men of wealth and conservatism, dissatisfaction of former Congress office holders denied candidacy etc.” he wrote. “Despite all these often valid criticisms, on some of which Congress was most vulnerable, no opposition emerged as a convincing, clear alternative. Nehru simply was above any important or effective criticism, although it was suggested in some seriousness that he should quit Congress and lead the opposition because democracy requires a strong opposition.”

The above report was published in the month of May when the election was still underway.

Most of the processes created and adopted for the first-ever elections in the country were brought back for the elections in 1957 as well. Sukumar Sen, much like from five years back, deserved credit for taking note of even the smallest of details and had made it a point to store ballot boxed to bring down costs of subsequent elections. In fact, after the 1951/52 elections, and despite some of the shortcomings of it, Sen had been invited to Sudan to conduct the country’s first-ever elections there.

Apart from the fact that the triple-member constituency from 1951/52 election was removed by First Delimitation Commission in 1955, and turned to a two-member constituency, not much has changed as far as election roadmap was concerned. The daunting task of taking the electoral process to more and more people remained and the plague of illiteracy prevailed.

While the electoral process may not have altered, the dynamic character of the country itself had evolved. 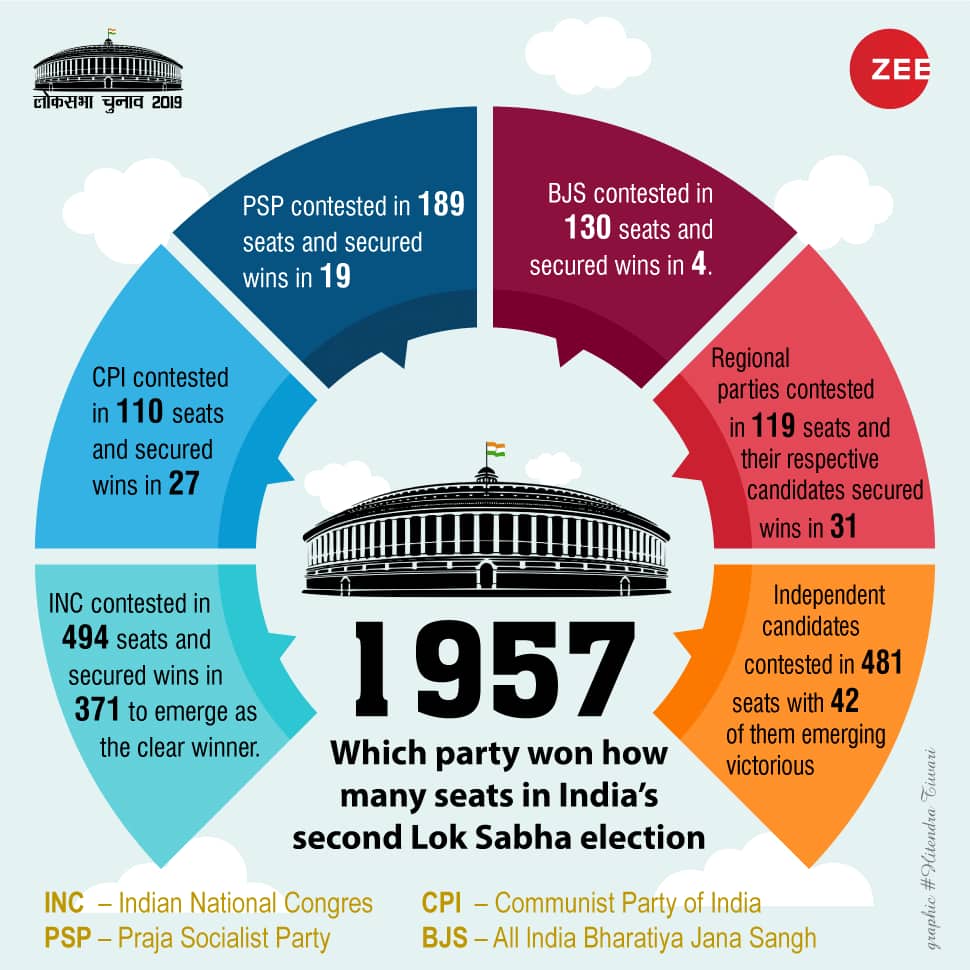 India’s second Lok Sabha election took place between February 24 and June 9. It witnessed yet another dominant performance from the Indian National Congress – a party which managed to gain seven more seats from the previous elections, although this was because the size of the Lok Sabha had been increased by five. The Indian National Congress’ vote share also saw a jump – from 45% to 47.8%.

The party managed to win five times the number of votes than the second-largest party – Communist Party,  which too had managed to gain 11 more seats than what it won five years ago.

Many political experts and analysts feel the win in the 1957 elections was more significant for the Indian National Congress than the one in the previous election. They feel that the challenges, even if on a small scale, were far more in number for the party this time around. Roach, in the same report mentioned above, felt there was a general acceptance among masses that what the governing class said was right, was right. “The attitude (of voters at the time) is one of uncritical, unexamined acceptance of the correctness of the decisions of those who govern. Individuals may complain privately but, despite occasional protests on something concrete and close to home, the Indian public – and not merely the uneducated public – is passive, usually unquestioning, and frequently uninformed,” he wrote at the time.

While it is possible that Roach saw Indian elections from the American perspective and, perhaps, with ample influence of the Cold War prevailing at the time, many others do feel that the lack of a strong opposition was too big a factor to bring down someone of Nehru’s persona.

Once again, the bulk of Indian National Congress’ strength lay in north India with 85.5% of its seats coming from there. That regional parties – anywhere in India – were still in their nascent stages – meant the larger national parties had no fear on that account. For the national parties, it was appeared more about counting their consolation wins to go from strength to strength.

There were also some key winners in the elections – Atal Bihari Vajpayee had registered his first win in elections and in the same year, would be praised by Nehru for his oratory skills. Nehru even predicted, correctly, that Vajpayee would one day become India’s Prime Minister.

VK Krishna Menon too registered a win in the 1957 election and it was to mark the start of a very powerful career. Menon was made the Minister of Defence and would deliver an eight-hour speech at the United Nations in the same year as the election, on India’s position on Kashmir issue.

It was also the last election conducted in India under the guidance of Sukumar Sen. Sen passed away on December 19 of 1958 but had left behind a legacy that Indians still largely follows every time they come out to vote.