With the national election just a week away, the political leaders are busy holding rallies across the country. 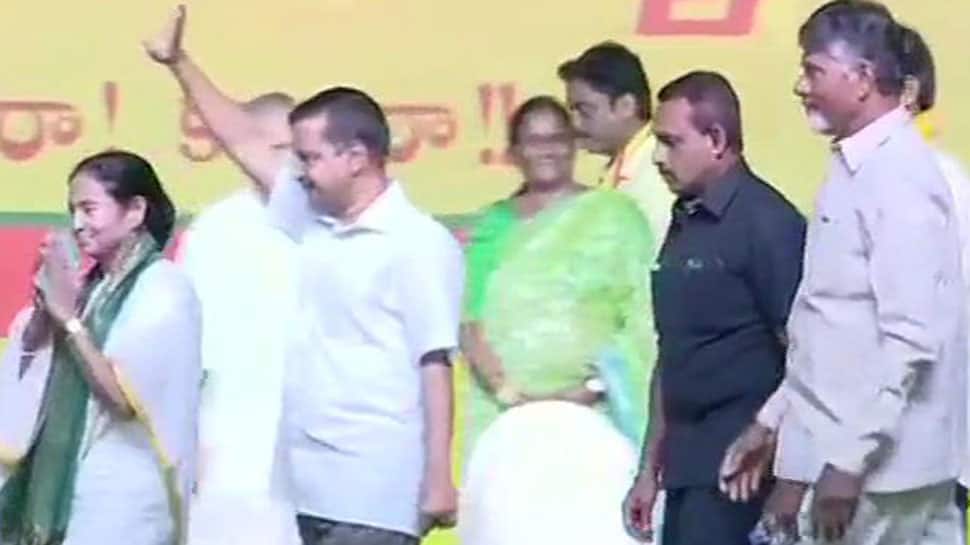 Prime Minister Narendra Modi interacted with 'chowkidars' as part of Bharatiya Janata Party's (BJP) 'Main Bhi Chowkidar' campaign from New Delhi’s Talkatora stadium. Several top BJP leaders were present at the event, along with other people who are supporting the campaign.

Besides PM Modi, Congress president Rahul Gandhi addressed two rallies in Andhra Pradesh. With the national election just a week away, the political leaders are busy holding rallies across the country.

Thanks for joining us. Do come back again for the election live updates from April 1 (Monday).

Here are all the updates from March 31 (Sunday).

* "We have come here to appeal to you to vote for Chandrababu Naidu again. He has laid the foundations of a modern Andhra Pradesh. If he gets five years more, he will expedite the process," Kejriwal said.

PM Modi at 'Main Bhi Chowkidar' program in Delhi: If four generations of a family have been repeating the same promise but not doing anything towards fulfilling it, then people need to understand it. pic.twitter.com/teLCuJQgTH

* The next term will be dedicated to fulfill the aspirations of the citizens: PM Modi

* Protect yourselves from getting influenced by false promises: PM Modi

* We should encourage the first time voters: PM Modi

* On the success of Mission Shakti, PM Modi says, "It is a big achievement for our scientists. It is due to them that India has entered the elite club of space powers after three countries."

* We have been suffering from terrorism for the past 40 years. We know who is responsible for it. I thought, till when will this go on? Then, I decided that we need to take target the place from where this emanates: PM Modi

* Those who have looted the country will have to pay the price: PM Modi on corruption

* Pakistan is in dilemma if they say something happened in Balakot. They'll have to accept, ‘Yes, we had terrorist camps operating here.’ We attacked the place they can't hide anymore. They haven't let anyone visit it in the last 1.5 months: PM Modi

* On Balakot airstrike, PM Modi says, "I have complete trust on the armed forces, have trust on their ability and disciple."

* Elections are not my priority, the country is: PM Modi

* PM Modi lauds the youth for thinking about the future. “Along with me, 130 crore Indians will take oath after election result," he says.

* I am happy that spirit of chowkidar is spreading: PM Modi

* I convey my greetings to all 'chowkidars' across the nation who have joined this Main Bhi Chowkidar program: PM Modi

* We are all 'chowkidars', who are committed to a strong and prosperous India: PM Modi

* I thank the people who criticised me during 2014 Lok Sabha election 2014. It's because of them I got so much of popularity: PM Modi

* This is western UP, earlier when people used to go somewhere with bullock cart, their cattle used to end up in illegal slaughter houses. Who doesn't know what happened in Visara? How SP govt suppressed sentiments here? When our govt came, we shut all illegal slaughter houses. Congress govt had said that Ram and Krishna don't exist. I would like to ask Congress leaders what do they want to see by going from one temple to the other? Why this hypocrisy? Priyanka Vadra's statement yesterday over Ayodhya is an insult to Hindus everywhere. She was asked why did she not to go Ram janmbhoomi when she went to Ayodhya? She said it is disputed land, so she didn't. She didn't go there as this would have upset a particular community: Yogi Adityanath

*  "It's up-to him where he wants to contest from, how will I know if he got scared or not?" Union Minister Maneka Gandhi told ANI on Rahul Gandhi contesting from Amethi and Wayanad.

*  "I read on WhatsApp that Rahul Gandhi has run towards Kerala, leaving Amethi behind. Why has he escaped to Kerala? All of you know that this time Rahul Gandhi is done for in Amethi. So he is going to Kerala in a bid to win on the politics of polarisation," Amit Shah at a rally in Nagina, Uttar Pradesh.

BJP releases list of 4 candidates in Gujarat for #LokSabhaElections2019 . One candidate for by-election to Talala assembly constituency also announced. pic.twitter.com/pTiPY3kvny

* "He's fighting in one of the 20 constituencies(in Kerala)&doesn't need to be seen as any different. We'll fight him. He should've contested from a constituency where BJP is contesting, it's nothing but a fight against Left," Kerala CM P Vijayan on Rahul Gandhi contesting from Wayanad.

* Rahul ji has given his consent to contest from two seats, very happy to inform you that he will also contest from Wayanad in Kerala: A K Antony

AK Antony,Congress: Rahul ji has given his consent to contest from two seats, very happy to inform you that he will also contest from Wayanad in Kerala. #LokSabhaElections2019 pic.twitter.com/Rt7IDNxr0D

* Delhi Congress chief Sheila Dikshit on possible alliance between Congress and Aam Aadmi Party (AAP) in Delhi: "You will get to know about it in a matter of few hours, by this evening or by tomorrow. There will be an official announcement."

* Former Bihar minister Manju Verma who is out on bail in Muzaffarpur shelter home case was seen on stage during Union Minister and BJP candidate Giriraj Singh's rally in Begusarai on Saturday. Verma had been arrested under arms act linked to the Muzaffarpur case.

Former Bihar minister Manju Verma who is out on bail in Muzaffarpur shelter home case seen on stage during Union Minister and NDA candidate Giriraj Singh's rally in Begusarai yesterday. Verma had been arrested under arms act linked to the Muzaffarpur case pic.twitter.com/pYPWOBZDMv

* Union Minister Ashwini Kumar Choubey misbehaves with SDM KK Upadhyay in Buxar after the official had stopped his convoy for violating model code of conduct.

* PM Narendra Modi to interact with people on Mar 31 over his 'Main Bhi Chowkidar' campaign.

There were issues between Shiv Sena and BJP, but resolved now: Uddhav Thackeray