Here are the live updates of Lok Sabha Election Campaign 2019: 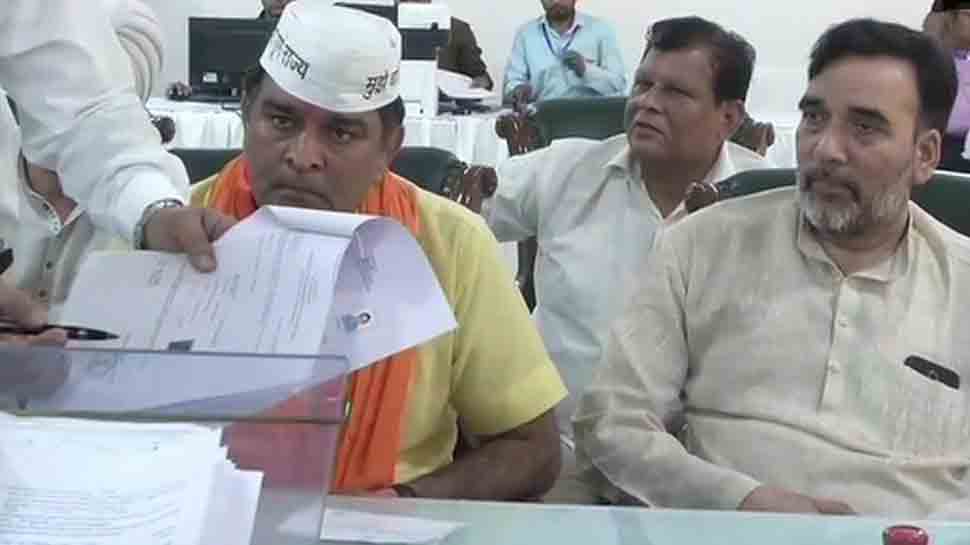 As India votes in the second phase of Lok Sabha election 2019 on Thursday, April 18, high pitched elections campaigns of political parties will continue across India.

Here are the live updates of Lok Sabha Election Campaign 2019:

* An audio clip where NCP MP Supriya Sule is purportedly heard threatening a former party worker who has joined the BJP has surfaced on social media.

* Samajwadi Party President Akhilesh Yadav said on Thursday that the ongoing Lok Sabha polls were an "election for change".

* Union Minister Rajnath Singh on Thursday said India would be freed from poverty, the day it got rid of the Congress.

* They all talked about saving the poor and eradicating poverty, but in reality poverty kept increasing. Now Rahul Gadhi is also making such promises. The only Prime Minister who can eradicate poverty is Narendra Modi: Rajnath Singh at Uluberia.

* Father of a victim in Malegaon blast has filed an application against Sadhvi Pragya Thakur after she was declared BJP candidate from Bhopal. Application has questioned her candidature before NIA court citing her health which was one of the reasons in her bail application.

* Congress not ready to accept surgical strike and Balakot air strike as our victory; Congress and its allies think about self and not national interest, says Modi in Bagalkot.

* Election Commission of Rampur issues show-cause notice to Union Minister Mukhtar Abbas Naqvi for violating the model code of conduct by making references to the defence forces during a public meeting held on April 3rd in Rampur.

* PM Narendra Modi in Bagalkot, Karnataka: The drama unfolding here in the state for the past one year is refusing to end. This drama has everything including emotions and revenge. Situation is such that we get to see the overflow of emotions regularly in rallies and press conferences.

* Odisha: A 95-year-old man collapsed & later died while waiting for his turn to vote, at a polling booth in Ganjam. He was rushed to the hospital where he was declared brought dead.

* Vivek Oberoi on his film 'PM Narendra Modi': Everybody in the EC saw the film yesterday, we asked them how did you like the film?Can't tell you their response but we were happy with their answer; Only request is that the film should be allowed to release.

* Samajwadi Party president Akhilesh Yadav expressed concern over reports of EVM malfunctions in some parts of the Uttar Pradesh where polling for the second phase of the Lok Sabha polls are taking place and asked the Election Commission to take immediate steps to rectify them.

* The ruling AIADMK on Thursday lodged a complaint with the Election Commission against DMK President MK Stalin and the party's Chennai Central candidate Dayanidhi Maran for violating the model code of conduct (MCC).

* The Election Commission in Madhya Pradesh has banned the `Chowkidar Chor Hai` advertisement of the Congress party and ordered an end to its broadcast. The Joint Chief Election Officer on Wednesday issued a notice to all the state district officers saying that the media certification and inspection committee has cancelled the ad certification and it should be discontinued.

* A shoe was hurled at BJP spokesperson GVL Narsimha Rao during a press conference at party headquarters in Delhi. He has been identified as Shakti Bhargava, a surgeon by profession. There are no details yet over the motive of the act. Rao held Congress responsible for the attack.

* Union Minister Prakash Javadekar on Thursday exuded confidence of the Bharatiya Janata Party winning over 300 seats in the ongoing Lok Sabha election. Addressing a press meet in Bikaner in Rajasthan, Javadekar said that the Congress has realised hat it is losing the election. "Our politics is about uniting people not dividing them," he said.

* A case under a section of the Representation of People Act and section 506 of IPC (punishment for criminal intimidation) has been filed against Samajwadi Party candidate from Sambhal for allegedly making derogatory remarks against Prime Minister Narendra Modi. "SP candidate Shafiqur Rehman Burq had made derogatory remarks against the Prime Minister during an election meeting on April 11," Circle officer of Chandausi, Poonam Mishra said. In his election meeting address in Kela Devi area on April 11, Burq had allegedly said, "...Yeh gathbandhan PM Modi ke liye maut ka paigaam ban gaya hai (This alliance has become a message of death for PM Modi)." Sambhal goes to polls on April 23.

* "Development in Mathura is all due to my efforts. SP-BSP are only engaged in fighting with each other. There is a huge Modi wave here," says Mathura MP and BJP candidate Hema Malini.

#WATCH BJP MP Candidate from Mathura, Hema Malini says, "Development in Mathura is all due to my efforts. SP-BSP are only engaged in fighting with each other. There is a huge Modi wave here." #LokSabhaElections2019 pic.twitter.com/6Xm5dWWz2u

* "Dynasty politics isn't an important issue now, country's problems are the main issue. Only because of dynasty politics and regional politics, this country developed in several states. We're not bothered about criticism from BJP," says Karnataka Chief Minister HD Kumaraswamy after casting his vote in Ramanagara.

* BJP worker’s body was found hanging from a tree in Senabona village of Purulia district. This is the third such incident in a year in West Bengal.

* "How are attending events on invitation a violation of EC order," Adityanath's media advisor responds to Mayawati.

* Mayawati hits out at UP CM Yogi Adityanath, accuses him of violating EC's ban:

* Akhilesh Yadav to file nomination from Azamgarh on Azamgarh parliamentary on Thursday. He will later address a public meeting in Baitholi village along Azamgarh-Mau highway.

* After finishing his public meeting in Gujarat's Himatnagar in the morning, Prime Minister Narendra Modi will head to woo voters Karnataka's Bagalkot and Belgavi in the day and Kerala's Thiruvananthapuram in the evening. BJP national president Amit Shah visit address rallies at Chhattisgarh's Raigarh and Takhatpur, and Maharashtra's Aurangabad and Jalna. Home Minister Rajnath Singh will hold rallies West Bengal's Uluberia and Malda.