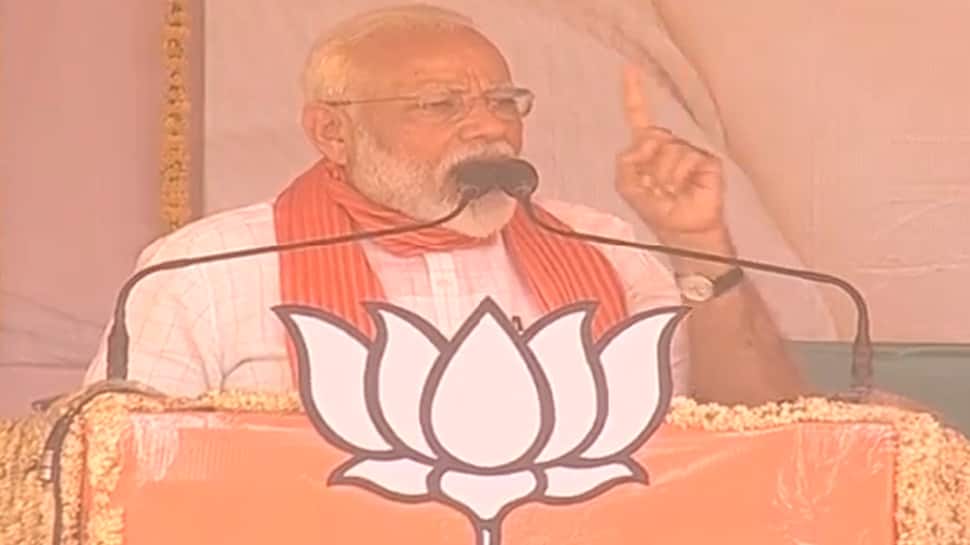 Thank you for joining us. Do come back again on Sunday (April 28) for live updates on Lok Sabha election 2019. Meanwhile, here are the updates from Saturday (April 27):

* BJP appealed to EC to bar AAP convener and Delhi Chief Minister Arvind Kejriwal from campaigning for alleged violation of the Model Code of Conduct.

* Campaigning has now ended for phase 4 of Lok Sabha election. Polling will be held on April 29. Over 12 crore 79 lakh voters will cast their votes to decide the fate of 961candidates at over 1 lakh 40 thousand polling booths across nine states.

* Before I became Prime Minister, there used to be a remote control government, there were only two mobile phone manufacturing companies in the country. Now within five years, there are more than 125 factories manufacturing mobiles in India: Narendra Modi in Hardoi.

* PM Modi terms opposition alliance 'opportunist' and 'mahamilawati' at Kannauj election rally. He mocked opposition leaders for their "dream" to become prime minister. He also slammed BSP chief Mayawati for seeking support of Samajwadi Party "just for sake of power". "Whatever efforts you (opposition) make, it will be..." the prime minister said, following which the crowd shouted in chorus "Modi again".

Shiv Sena has appointed Priyanka Chaturvedi as the "Upneta" of the party. (File pic) pic.twitter.com/kDe5KlfXHq

Madhya Pradesh CM Kamal Nath: Prime Minister should tell the nation who bears the expenses of his plane rides. He should reply from where did he get the money to construct a Rs 700 crore office of BJP in Delhi. Then only he should ask me questions pic.twitter.com/T6GI5FVwK3

* A case has been registered against Samajwadi Party leader Azam Khan for "violating Model Code of Conduct at a rally in Shahabad, Rampur". Saloni Agarwal, CO (Milak, Rampur) said, "Comments made by Azam Khan on April 25 were found to be in violation of MCC and a case was registered against him and two others."

* Raids are being held against Mayawati, against our family. BJP is trying to frame opposition leaders. Because they know that in these polls, they're going to get defeated by 'mahagathbandhan' in respective states. CBI, ED, IT, are working like IT cell of BJP. We are fighting against BJP on all 40 seats. Tanveer Sahab (RJD Begusarai Lok Sabha candidate Tanveer Hasan) is going to win Begusarai seat and that too by a huge margin. Whatever environment one creates, we aren't bothered, because the public has made its mind: RJD leader Tejashwi Yadav

* If Pragya Singh Thakur, a convicted person, an accused person, can contest an election, and in the name of separatism, Delhi is asking him (Yasin Malik) at gunpoint to surrender, anyone with self-respect will react the way Yasin Malik did. Even though we do not support Yasin Malik's ideology or actions, the courage he has shown is something which should be appreciated because New Delhi cannot threaten anybody, India is a democracy: Congress leader PC Chacko

PC Chacko, Congress: If Pragya Singh Thakur, a convicted person, an accused person, can contest an election, and in the name of separatism, Delhi is asking him (Yasin Malik) at gun point to surrender, anyone with self respect will react the way Mr Yasin Malik did. pic.twitter.com/GmWg2ZY0D5

* This is the Congress family that starts from Mahatma Gandhi, to Sardar Vallabbhai Patel, Muhammad Ali  Jinnah, Jawaharlal Nehru, Indira Gandhi, Rajiv Gandhi, Rahul Gandhi, and Subhas Chandra Bose, it's their party. They played the most important role in country's development and independence and so i joined their party. I have joined their party and will never leave the party: Shatrughan Sinha

#WATCH Shatrughan Sinha, Congress in Chhindwara, MP: Congress family from Mahatma Gandhi to Sardar Patel to Mohd Ali Jinnah to Jawaharlal Nehru...it's their party, they had the most important role in development & freedom of the country. This is the reason I've come here. (26.4) pic.twitter.com/HJg3EV8rNE

Himachal Pradesh: Over 5000 school children formed a human chain in Una town yesterday to create awareness about voting during elections. The 4 Parliamentary constituencies of the state will undergo polling on 19 May in the seventh & last phase of #LokSabhaElections2019 . pic.twitter.com/SB3dF8oXH2

* Hamirpur administration issues notice to independent candidate Sanjay Kr Sahu after a video of people collecting cash from his office surfaced online. SDM Sadar said, "Written reply sought within 2 days. The team will file a report, if guilty, action will be taken for Model Code of Conduct violation."

* Congress MLA Kalidas Kolambkar was seen at NDA's rally in Mumbai. PM Narendra Modi, Maharashtra CM Devendra Fadnavis, Shiv Sena chief Uddhav Thackeray, among others addressed the rally. After attending the rally he said, "I'm angry from Congress as no work could happen in my constituency. I'll leave Congress and support those who work. I came here to listen to their speech.I used to come to Atal Bihari Vajpayee's speeches as well."

Maharashtra Congress MLA Kalidas Kolambkar after attending NDA rally: I'am angry from Congress as no work could happen in my constituency. I'll leave Congress & support those who work. I came here to listen to their speech.I used to come to Atal Bihari Vajpayee's speeches as well pic.twitter.com/LU6Ef9EF0E

#Voting determines our future. Each of us must decide for ourselves what that should look like. There is no such thing as a vote that doesn’t matter.
Go vote... #ItMatters

* The Election Commission (EC) had announced that re-polling will be held in 18 booths in Arunachal Pradesh on April 27. The Commission had declared void the polling held in these booths on April 11 due to several factors, including malfunctioning of EVMs and procedural errors. The 18 booths are under four legislative assembly constituencies in Kurung Kumey District. The State CEO office has also announced that to provide adequate security, additional companies of paramilitary forces have been deployed in the district. On April 11, both Lok Sabha and Assembly elections were held in a single phase.

* PM Narendra Modi is scheduled to address three rallies in Uttar Pradesh's Kannauj, Hardoi and Sitapur districts at 9 am, 11 am and 12 noon respectively.

* BJP president Amit Shah will hold rallies in Odisha and Jharkhand. He is scheduled to address a rally at Daltonganj in Palamu at 10.30 am and is expected to visit Morada in Mayurbhanj district and Sukinda in Jajpur district to address rallies.

* BJP candidate from Gurdaspur, Suny Deol, will hold a rally in Ajmer, Rajasthan.

* BJP candidate from Mathura, Hema Malini, will be in Pali, Rajasthan.

* Odisha: Over 500 police personnel, engaged in election duty, cast their votes through postal ballot in Mayurbhanj.