Cricketer-turned-politician Mohammad Azharuddin too has been included in the list of star campaigners.

Priyanka Gandhi Vadra and Rahul Gandhi are expected to go the extra distance during campaigning for Congress in Maharashtra ahead of the Lok Sabha 2019 election. The party on Tuesday released a list of 40 star campaigners for the state, for the first and second phase of election, which included national and state leaders who can possibly connect with voters here.

While party president Rahul Gandhi is expected to lead the charge for Congress in Maharashtra, Priyanka too will be seen on the campaign trail here. Priyanka had officially joined politics in January and had been made the party-in-charge for eastern UP. 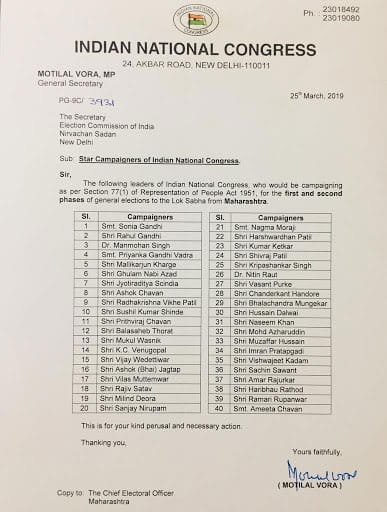 Interestingly, cricketer-turned-politician Mohammad Azharuddin too has been included in the list of star campaigners for the party for Maharashtra. He had been named working president of Congress in Telangana in November of last year.

There are 48 Lok Sabha constituencies in Maharashtra. Bhandara-Gondiya, Chandrapur, Gadchiroli-Chimur, Nagpur, Ramtek, Wardha and Yavatmal-Washim will cast vote in the first phase - on April 11.