In a hard-hitting reply in Lok Sabha to the motion of thanks to the President's address, Modi compared the work under his "55-month" rule to the Congress' record of "55 years" in power. 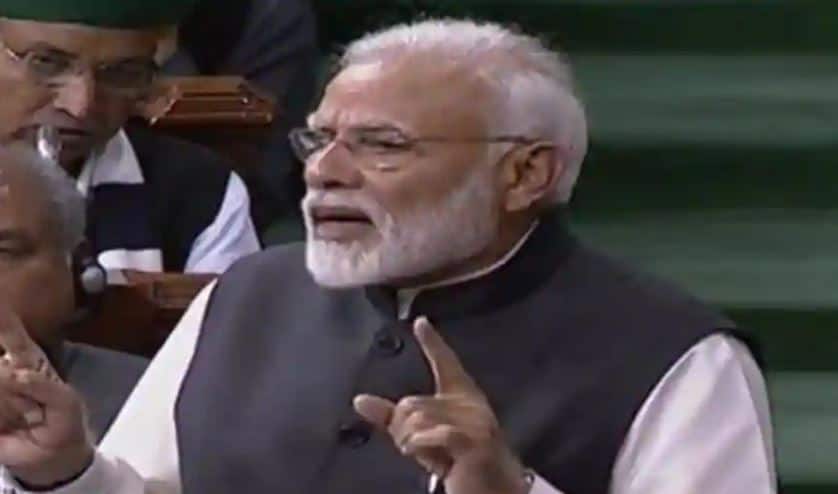 NEW DELHI: Prime Minister Narendra Modi on Thursday mocked the Opposition's proposed grand alliance as "maha-milawat" which the country's "healthy democracy" will reject as he blasted the Congress for "intimidating" judiciary, targeting the EC and "betraying" the nation by neglecting the armed forces.

In a hard-hitting reply in Lok Sabha to the motion of thanks to the President's address, Modi compared the work under his "55-month" rule to the Congress' record of "55 years" in power, while making a re-election pitch in what was likely his last speech in the House before the general election.

The motion was passed by a voice vote following the prime minister's 100-minute reply, in which he highlighted his anti-corruption plank and targeted the opposition parties that had come togther at a recent Kolkata rally saying their leaders are "out on bail in wholesale".

While the Congress' rule of 55 years was about "satta- bhog" (enjoying power), his government was all about "sewa bhav" (sense of service), Modi said, adding that the opposition party's main grouse against him was that he had challenged its "sultanate" and shaken it up despite coming from a poor family and being from outside Delhi.

"This intoxication (of power) is the reason of your problem," he added.

With Congress president Rahul Gandhi constantly targeting his government for alleged corruption in the Rafale deal, he claimed that the opposition party wanted the transaction cancelled as it was batting for another company.

"You do not want the Air Force to be strong. With which company are you siding? At whose behest you have been speaking so?" he asked, charging that middlemen were always part of defence deals when Congress was in power.

"Some chacha or mama (uncle) were part of one deal or another," he said.

BJP leaders have been alleging that the Congress has been batting for Eurofighter, which was in competition with Rafale for India's bid to acquire the next generation fighter aircraft.

Expressing confidence that the BJP will return to power, he took a swipe at the Congress and said it should carry on its preparations against his government so as to bring a "no- confidence" motion against it in 2023 as it had done in 2018.

As he said so, Congress leaders were heard accusing him of arrogance, to which he retorted that his confidence was driven by his party's "sewa bhav" as this brought the BJP to power with a majority in 2014 after it had fallen to two seats in 1984 polls.

"You fell to 44 seats from over 400 due to your arrogance," he said pointing to Congress leaders in the House.

Taking a dig at Gandhi without naming him, Modi said he was "crying" over EVMs on the day the country was discussing the budget. "What has happened to you?" he asked.

In an apparent reference to liquor tycoon Vijay Mallya, who is wanted in cases of defrauding banks and whose extradition from London is being pursued by India, he said, "People who have fled the country are crying on Twitter that 'I had left with Rs 9,000 crore but my assets of Rs 13000 crore have been seized'".

Referring to development figures cited by the Congress' Mallikarjun Kharge to list achievements of its past governments, Modi said the opposition party's "suffered from 'BC- before Congress' and 'AD- after dynasty'" as it believed nothing was done in the country before its advent and everything was done after the (Gandhi) dynasty came to power.

With opposition parties joining hands to build a grand alliance against the BJP-led National Democratic Alliance, he said the country has seen for 30 years such "milawat-wali" (adulterated) governments and the new combination against him is "maha-milawat" (highly adulterated).

The prime minister also cited various job figures and his government's works for the farmers to respond to charges of rising unemployment and agrarian distress.

The Congress used "loan waiver" for farmers as a "10-year scheme" to win elections but in reality did nothing for small peasants, he alleged, asserting that his government is dedicated to national interest and rooting out corruption and black money.

In an oblique reference to the Enforcement Directorate's probe against Rahul Gandhi's brother-in-law Robert Vadra on corruption charges, he said details of properties are being unearthed in investigation of graft cases.

"For whom, where, when... Details are coming out," he said, and then referred to recent extradition of people wanted in corruption cases by central agencies.

Congress leaders are downcast as they are not sure what these "raazdar" (ones having secrets) will reveal, Modi said. To the charge that his government was destroying institutions, he hit back at the Congress saying it was a case of "ulta chor chowkidar ko dante" (thieves scolding the watchman).

The Congress imposed the Emergency, insulted armed forces, called the Army chief a "goonda", manufactured story of coup, tried to intimidate the judiciary by proposing impeachment of the then Chief Justice of India Dipak Misra, he said and accused it of being behind a press conference in London in which EVMs were questioned.

The Election Commission is respected worldwide and even it was targeted, he said, adding that the Congress in its zealousness to criticise him has ended up running down the country.

A former prime minister, a reference to Rajiv Gandhi, had called the Planning Commission a "bunch of jokers" while the Congress governments at the Centre misused Article 356 and dismissed close to 100 state governments, he said.

Former prime minister Indira Gandhi dismissed almost 50 of them, Modi added. "I want to remind the voters of 21st century how power was enjoyed and abused for 55 years," he said, claiming the Commonwealth Games, held in India in 2010 when the Congress-led UPA was in power, were used to augment personal wealth.

Crooks and those who looted public money had ceased to be scared and his government has put in them the fear of law, he said.

"I have no baggage. I don't give favours or depend on favours from others for survival....

"Those who have looted the nation will continue to be scared of Narendra Modi," he said.

Citing his government's report card at the outset, he said India became the sixth largest economy in the world from 11th, second biggest steel producer, record producer of milk and grains and biggest consumer of internet data.

Comparing his government and previous Congress dispensations, he said the sanitation coverage is now 98 per cent compared to 40 per cent in 2014 and 13 crore new LPG connections were given compared to 12 crore allotted by 2014.

In its manifestoes in 2004, 2009 and 2014, the Congress always spoke about electrifying villages and building houses for the poor but never did it and repeated the same promises.

"The task of fulfilling these was to left to me and my government has done it," he said.

Ulta chor chowkidaar ko daante, BC is Before Congress, AD is After Dynasty: PM Narendra Modi's jibes at Congress