A graffiti featuring Modi in his 'chowkidaar' avatar, while another with Vijay Mallya and Nirav Modi on a Kingfisher airline plane, have also occupied space on the fences. 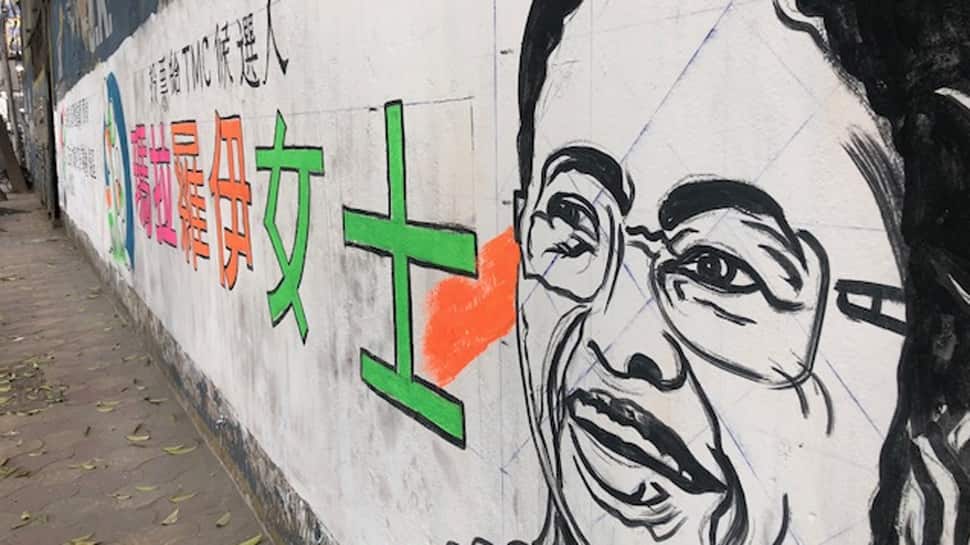 Kolkata: The only thriving Chinatown in the country is bustling with political activity, probably for the first time in its history, with graffiti of political leaders making a debut on the walls of the township, otherwise known for its signature eateries.

According to a political analyst, Bengal has always had a Chinese connection as the Left leaders in the state often swore by the communist regime in the neighbouring country, lauding its policies.

The people of Chinatown, however, have largely stayed away from the hustle and bustle of the election. This time around, the scenario has changed.

Kolkata's Chinese connect has taken a new form and shape, with people in this part of the city coming out in support of the Trinamool Congress (TMC), painting the township blue and white (the colours of the ruling party) with political slogans in Mandarin.

One can easily spot sketches of Chief Minister Mamata Banerjee and the party's candidate from South Kolkata seat, Mala Roy, adorning the whitewashed walls of the Chinatown with 'Vote for Trinamool Congress' written in the Chinese language beside the drawings.

A graffiti featuring Modi in his 'chowkidaar' avatar, while another with Vijay Mallya and Nirav Modi on a Kingfisher airline plane, have also occupied space on the fences.

Roy, who is the chairperson of Kolkata Municipal Corporation (KMC), claimed that many in the town are loyal supporters of the TMC.

She claimed that the residents have taken it upon themselves to campaign for the party, without any prodding from the leaders.

"Of the 5,000 Chinese people residing in the town, 2,000 are eligible voters. We work with them throughout the year," the TMC candidate asserted.

Vincent Lee, a Chinese-origin man born and raised in the city, said that this was the first time he came across a political graffiti in the settlement.

Lee (55), who runs a shoe shop at Bentinck Street in the central part of Kolkata, said, "This is unique, many of us are voters, but never have I seen a political graffiti in Mandarin in the town."

Franchis Hing, another Indian of Chinese ancestry, said he and his family are involved in the tannery business and have never had anything to do with local politics.

He, however, acknowledged that the town has never seen its people openly supporting a political party.

The Chinese-origin people in the city, whose ancestors moved here in the 18th century, are mostly involved in manufacture and trade of leather goods or running Chinese restaurants.
According to a study, the numbers of Chinese-origin people, which was nearly 20,000 in the city at one point of time, have dwindled over the years with many migrating to countries like Canada, USA and Australia.

Wish he had spoken up all these years: Mehbooba Mufti reacts to LK Advani's blog