PDP, NC lash out at BJP for its scrap Article 370 promise in election 'sankalp patra'

The remarks from the prominent Jammu and Kashmir leaders come soon after the BJP released its manifesto for the Lok Sabha polls. 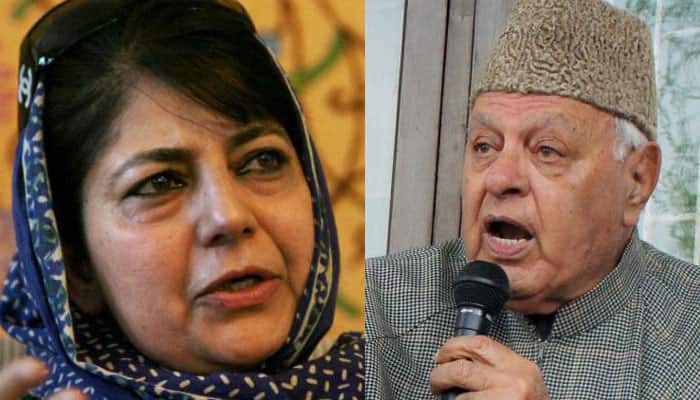 Srinagar: National Conference and Peoples Democratic Party on Monday lashed out at the Bharatiya Janata Party following the release of its 'sankalp patra' for the 2019 Lok Sabha election which promised abrogation of Article 370 and annulling Article 35A if voted to power.

NC president Farooq Abdullah said that scrap of Article 370 of the Constitution will pave way for "freedom" for people of Jammu and Kashmir. He further asked the BJP to try joining the hearts and not break them.

NC vice president Omar Abdullah, too, hit out at J&K Governor Satya Pal Malik after the release of the saffron party's manifesto. Taking to Twitter, he said, "Recently J&K Governor claimed there was no threat to Art 370 & 35-A and that parties like mine were only using them to drum up fear in the elections. I hope his colleagues in the BJP send him a copy of their manifesto."

Reacting to BJP's scrap Article 370 promise, PDP chief Mehbooba Mufti warned the saffron party to not play with fire. "The situation in Jammu and Kashmir is already sensitive. If this happens then not only Kashmir but the entire country will burn. So I appeal to BJP that please stop playing with fire," Mehbooba said.

The remarks from the prominent Jammu and Kashmir leaders come soon after the BJP released its manifesto for the Lok Sabha polls. The party reiterated its commitment to scrap Article 370, which grants special status to Jammu and Kashmir.

The BJP also resolved to annul Article 35A of the Constitution, which bars people from outside to own property in Jammu and Kashmir.