No bomb blasts after 2014; we attacked terrorists in Pakistan: PM Narendra Modi in Azamgarh rally

PM Modi on Thursday attacked the opposition for paying no heed to the national security in past. 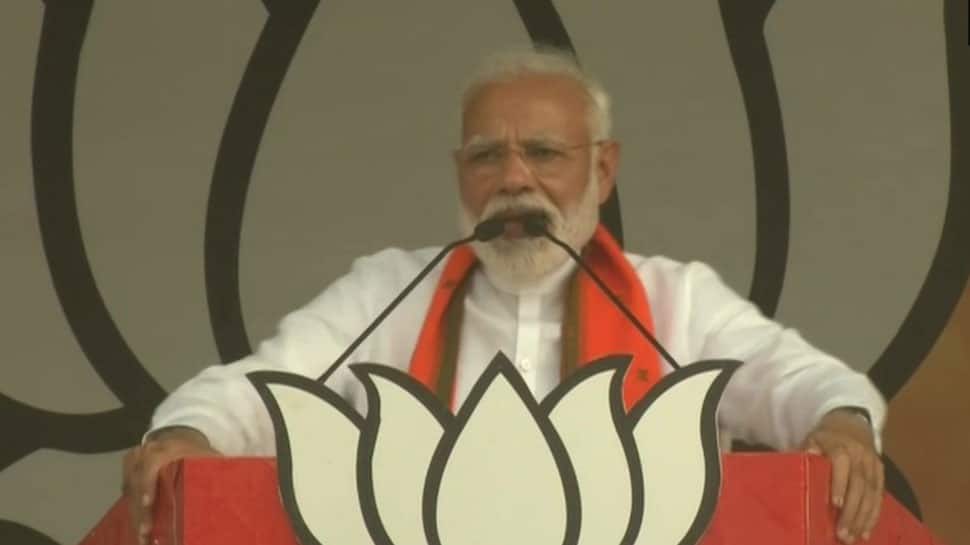 Azamgarh: Mounting a blistering attack on the opposition, Prime Minister Narendra Modi on Thursday stressed that no bomb blasts took place in the country after 2014 since the BJP-led NDA government gave top priority to the national interest.

The PM made this statement while addressing an election rally in Azamgarh from where Samajwadi Party chief Akhilesh Yadav is contesting.

The PM further told the gathering that it was only due to his government's 'zero tolerance towards terrorism' policy that terror activities have been restricted only to J&K now.

''How were bomb blasts brought under control in all cities after 2014? How have terror activities been restricted only to J&K now? It is because our govt prioritised national interest. We entered Pakistan and attacked terrorists,'' the PM roared in Azamgarh rally.

PM Modi in Azamgarh: How were bomb blasts brought under control in all cities after 2014? How have terror activities been restricted only to J&K now? It is because our govt prioritised national interest. We entered Pakistan and attacked terrorists. pic.twitter.com/ONk4g78iY0

During his speech, PM Modi urged the voters not to vote for a "khichdi" (coalition) government as it would do more harm than good to the country and to them.

"Be wary of a 'khichdi' government," the PM said.

Stating that voting for the opposition alliance was fraught with danger, the PM said, "The 'mahagathbandhan' can only lead to anarchy and instability and make the country insecure."

While stating that Azamgarh had become synonymous with terrorism, PM Modi said, ''the scenario has, however, changed since 2014, when the BJP-led government was formed at the Centre.''

"Earlier, all terror activities had links to Azamgarh. But what happened after 2014 is for all of you to see," the PM asked the crowd.

Attacking the 'Mahagathbandhan', the Prime Minister said that the people had already seen how "gathbandhan" governments were steeped in corruption in the past and cited the 2G scam among others.

Later, addressing a rally in UP's Janupur, the PM attacked BSP chief Mayawati, who, he alleged, is being used by her allies for getting votes of the Dalits and the backwards only.

''Behen Ji (Mayawati) will understand the game that has been played to keep her outside Uttar Pradesh only after May 23. Behen Ji is now seeking votes for the people who had called Baba Saheb Ambedkar a land mafia and insulted him at every step,'' the PM said at the rally.

He concluded by appealing to the voters to cast their votes carefully and to chose a strong and corruption-free government.