Mahajan, who has been winning from Indore constituency since 1989, also said she did not have any authentic information about her party's policy about not giving tickets to those leaders who 75 plus. 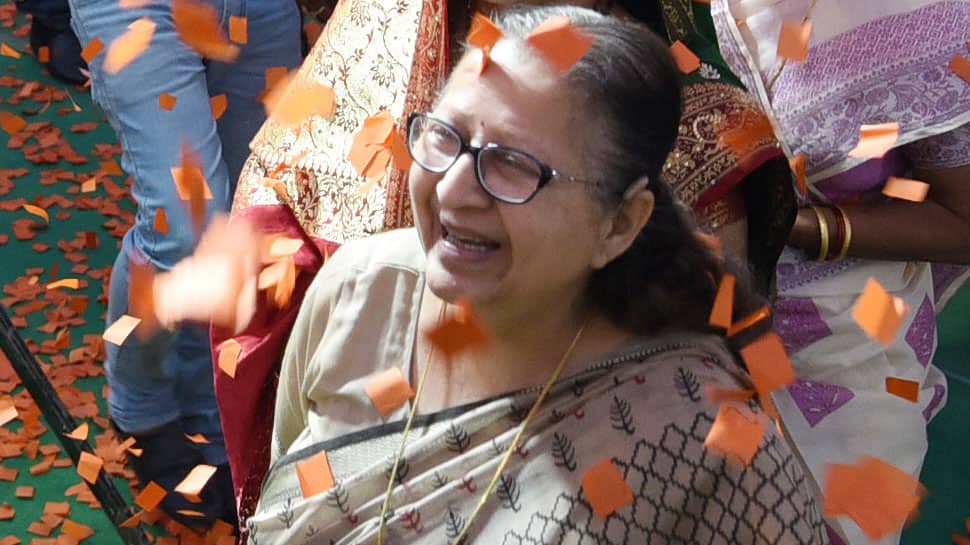 Indore: Indore MP and outgoing Lok Sabha Speaker Sumitra Mahajan on Wednesday said politics cannot have a fixed retirement age as is the case with government jobs, days after she opted out of the poll fray amidst speculations that the BJP was not keen to field leaders above 75 years of age.

Mahajan, who has been winning from Indore constituency since 1989, also said she did not have any authentic information about her party's policy about not giving tickets to those leaders who 75 plus.

As the BJP dithered on announcing the candidate for the Indore seat, Mahajan announced on April 5 that she would not contest the Lok Sabha elections. Mahajan had written to BJP chief Amit Shah stating that she has freed the party to make its choice for Indore seat. Mahajan turns 76 on Friday.

"Politics cannot be compared with government jobs. Retirement age in government service is pre-determined. However, this cannot be done in politics because politicians are directly involved with happiness and sorrows of the common people and work for them beyond deadlines," Mahajan said.

The MP recalled that Morarji Desai had become prime minister of the country when he was 81.

In an interview to a magazine recently, Shah had stated that it was his party's decision not to give Lok Sabha poll tickets to those above 75 years of age, leading to veteran leaders like LK Advani and Murali Manohar Joshi missing out. Though he had not named Mahajan, the outgoing Lok Sabha speaker too falls in the same age bracket.

When asked about Shah's statement, Mahajan said as she was occupied with the responsibilities of the post of Lok Sabha Speaker, she could not attend the meetings held by BJP's central organisation in the last five years and thus is not aware of any such age bar policy. "I don't have any authentic information about the party meeting in which the policy regarding not giving tickets to party leaders who crossed 75 was decided. I am not aware of this. Only Amit Shah can say anything in this regard," she said.

Mahajan, however, said, "If there is a policy decided by BJP organisation for the leaders above 75 years of age, then the party workers have to abide by it".

In reply to a question, Mahajan said, "I am not so old that I have to retire from politics. I have been working for the BJP and will continue to do so".

Mahajan also took potshots at proposed "Maha gathbandhan" or grand-alliance of Opposition parties over the claims of winnability in the Lok Sabha elections, slated to be held in seven phases from April 11.

"Any political party must have at least 272 Lok Sabha seats to form a government at the Centre. But, the Congress and other Opposition parties involved in the so-called 'maha gathbandhan' are not even contesting those many seats," she said.

Mahajan also said various factions of the proposed bloc are divided across states and there is no consensus on their prime ministerial candidate. "I feel that the 'Maha gathbandhan's main objective is to claim the post of the Leader of Opposition in Lok Sabha, and not to form the next government," Mahajan quipped. She also questioned financial feasibility of the proposed "Nyay" scheme of the Congress for the poor.

Congress president Rahul Gandhi had announced the scheme which he promised to implement if his party is voted to power. The scheme envisages depositing Rs 72,000 per year to the poorest people. "The poor have suffered and faced injustice during the rule of the Congress which had talked about 'Gareebi Hatao' (eradication of poverty). Rahul should calculate whether the government would be able to arrange so much money that it can deposit Rs 72,000 in the bank account of each poor?" she asked.