"The so-called all-party meeting convened in Delhi is nothing but a confession of defeat by the so-called Mahagathbandhan." 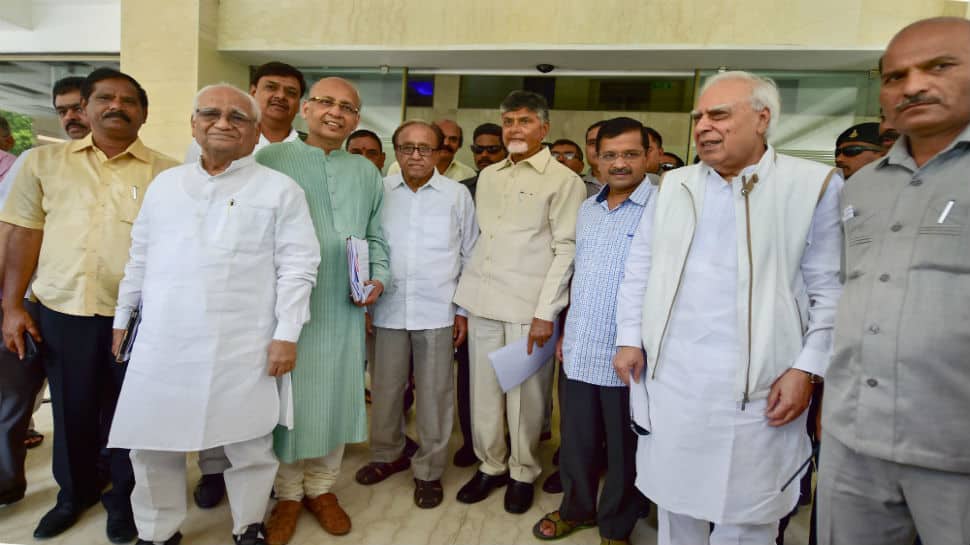 New Delhi: The BJP Sunday termed the opposition parties meeting in Delhi an exercise "to find excuses for their impending massive defeat" in the Lok Sabha polls.

The opposition alliance is a misnomer because most of them are fighting elections separately, BJP spokesperson GVL Narasimha Rao said.

"The so-called all-party meeting convened in Delhi is nothing but a confession of defeat by the so-called Mahagathbandhan. They are already trying to find excuses for their impending massive defeat.

"They have not only failed to mount a challenge against the BJP in this election but have also failed as an opposition in the last five years," Rao said.

Raising doubts over the credibility of EVMs, a number of opposition parties, including the Congress, Telugu Desam Party (TDP), Samajwadi Party, CPI and CPI(M), Sunday said they will move the Supreme Court again to demand verification of at least 50 per cent of votes by paper trail.

The people are delivering a massive blow to "this negative opposition" and their attempts to really come together is only "to express confession of their defeat in the ongoing elections," he said.

The only thing they have in common is negativity and that they want to pull India back from the development it has witnessed in the last five years, he said.

The BJP also took a dig at the Congress for fielding its MLA Lalit Nagar as its Lok Sabha candidate from Faridabad in Haryana, alleging that he was named because his brother played a role in various land deals involving Gandhi family and Rahul Gandhi's brother-in law Robert Vadra.

Alleging that Nagar's brother signed several documents on behalf of Rahul Gandhi, Rober Vadra and Priyanka Vadra, Rao said "he is the benami of the family".

"Why has the Congress party fielded a benami as a candidate, is this out of pressure, is this out of love or does this not clearly establish that all those who are involved in property scandals are actually extremely close to Gandhi family and Rahul Gandhi himself," he alleged.

Rao also asked Congress president Rahul Gandhi to answer questions about all the "shady and murky" property deals that he and his brother-in-law got into after coming to power in 2004.

Referring to the purchase of some properties, Rao also sought to know the sources of Rahul's incomes and how has his assets increased over the years despite he having no other source of income except being an MP.

"Rahul Gandhi's alliance with middle men, brokers, property mafias and his sympathetic approach towards separatists and even terrorists clearly show that Congress party's real alliance in this country is with negative and evil forces only," he said.

He further alleged that Gandhi's public interactions and speeches only show frustration of the party for not being able to "reverse the negative trend" and therefore indulging in lot of negative vibes.

"People will punish the Congress for not only failing as an opposition in the last five years but also indulging in reckless statements and reckless acts of political buffoonery," he said.

Referring to the all-party meeting of opposition leaders in the national capital, Rao said, "Mr Naidu's visit to Delhi is the result of his frustration after sensing a massive drubbing in Andhra Pradesh simultaneously in the state assembly and Lok Sabha polls and the only other party in deep frustration in Delhi is Congress."

Mr Naidu may travel to other parts of the country to jointly cry over their impending defeat in the national and assembly polls. "This is an indication that the so called grand alliance looks extremely depleted, completely frustrated and this alliance is looking for massive excuses for impending defeat," the BJP leader said.

Reacting to Congress' demand for a thorough probe into the alleged transportation of a "suspicious black trunk" in Prime Minister Narendra Modi's helicopter during his visit to Chitradurg in Karnataka, Rao said these are baseless allegations and the "Congress party which is synonymous to corruption" should come out clean on their issues.