Punish Congress and its allies in such a way they lose deposits: PM Narendra Modi

Addressing a massive rally in Bengaluru, he said the Congress has promised to remove the Army from Jammu and Kashmir, saying "exactly what Pakistan says word to word in Pakistan's language." 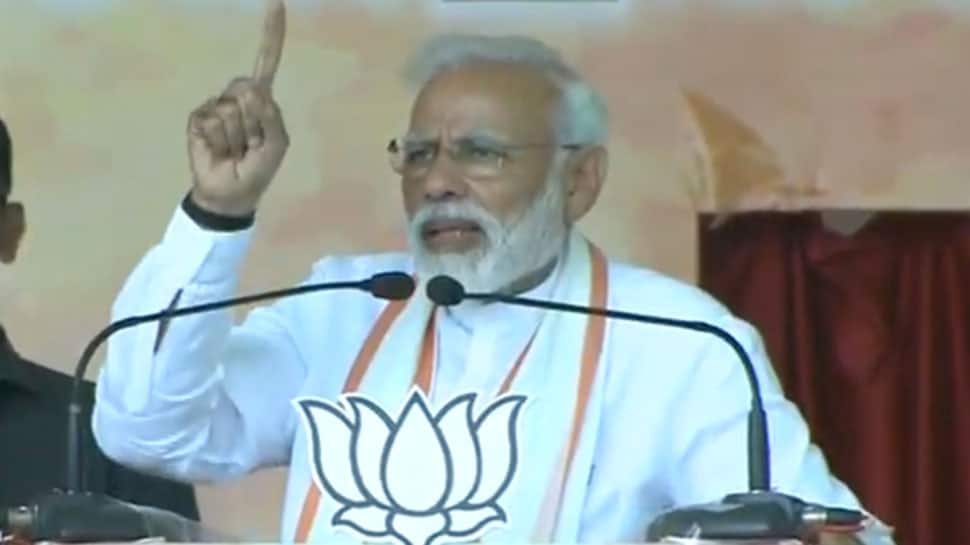 Bengaluru/Mangaluru: Prime Minister Narendra Modi on Saturday mocked Congress' "dream" of forming a government at the Centre and castigated it on national security and Jammu and Kashmir issues, asking people to punish it in such a way that the party would not be able to save its deposits in the Lok Sabha polls.

Addressing a massive rally in Bengaluru, he said the Congress has promised to remove the Army from Jammu and Kashmir, saying "exactly what Pakistan says word to word in Pakistan's language."

Devoting most parts of his speech to national security, PM Modi said the Congress had spoken about coming to power in its manifesto and added, "who can stop one from dreaming?"

"But let them dream about forming the government. I can understand it because a chaiwala has robbed the opportunity of four generations of Sultanate," he said.

PM Modi said what was worrying was that the Congress has said in its manifesto that if they form the government in Delhi, they would "remove" AFSPA (Armed Forces Special Powers Act) that gives special powers to the soldiers. "Which way are they going? Didn't you feel the pain and anger hearing this? The Jammu Kashmir for which thousands of soldiers were martyred, you want to make soldiers unarmed, helpless?" he asked the crowd.

PM Modi said Congress had also said in Pakistan's language that they would remove the Army from Jammu and Kashmir. "Is this okay with you, will you be able to forgive Congress? Pandit Nehru sowed the seed of fire in Kashmir and still the country is bearing it, now they say they will remove Army from there, what is the meaning of it?"

PM Modi also referred to the talk about having two prime ministers-one in India and the other in J&K (by National Conference leader Farooq Abdullah).

"Their talk of removing the law (AFSPA), removing the military and their Milavati friends talk about second Prime Minister. If you see all these together, does Congress want to save Kashmir? Will you allow Kashmir to go away? The land on which our soldiers have shed their blood," PM Modi asked.

The Congress manifesto said the party proposed to reduce the presence of the Indian Army and central armed police forces (CAPFs) in the Kashmir valley. It said the AFSPA and the Disturbed Areas Act in Jammu and Kashmir would be reviewed.

Referring to the air strike and surgical strike on terror camps in Pakistan and launch of ASAT (Anti Satellite) by India, PM Modi said the whole world was with India. "Earlier whenever such things or statements were made, Russia used to be with us and the entire world with Pakistan. Now what has happened is China alone is with Pakistan while the entire world was with us. Isnt it India's strength?" he asked.

"You might have felt Congress processor is slow, but their software is corrupt. Their process is fast only whensomething has to be done against the countrys security and demoralise our brave soldiers," PM Modi said.
T
he Prime Minister also hit out at the Congress for its promise to review the sedition law, saying it wants to remove law to punish those who indulge in treason. "Will you accept such Congress and their allies? "...

Making such promises, can we forgive the Congress that has such a mindset, he asked, telling voters that "in this election, punish Congress in such a way and also their allies that they should not be able to save their deposits."

The prime minister also took exception to the political row created by the ruling Congress-JDS alliance over the recent Income Tax raids on several JDS men across Karnataka. PM Modi asked the crowd, "should the law be followed or not whether it is PM or CM or minister? Why get scared if you have not committed anything wrong?" he asked.

On March 28, the Income Tax department carried out raids at multiple locations in Bengaluru, Mysuru,Mandya, Ramanagara, Shivamogga and Hassan, triggering a strong reaction from Chief Minister H D Kumaraswamy and Congress leaders, who accused the Centre of promoting the politics of vendetta. Kumaraswamy had even called the I-T officers as BJP agents and led a protest by the ruling Congress-JDS coalition in front of the IT department office here.

In his rally at Mangaluru, PM Modi said the ruling Congress-JDS coalition in Karnataka and parties alike were inspired by "Pariwarvad" (dynasty) and believed in giving power to even the last member of the family.

Addressing a massive rally, PM Modi said unlike the Congress, JDS and others, BJP's inspiration came from "Rashtrawad" (nationalism). He said the Lok Sabha polls was not about who became an MP or prime minister or minister,but about how the "New India" should be and what should be its inspiration.

"Inspiration of Congress-JD(S) and parties like them is pariwarwad (dynasty) and our inspiration is rashtrawad (nationalism). They look for ways to give power to even the last member of their family, while we are striving to bring those people ahead who are in the last line of society. Their darshan is vamshoday, while ours is antyodaya (uplifting the weaker sections of society). Because of their vamshoday there will be corruption and injustice and because our antyodaya the glory of transparency and honesty will increase," PM Modi said.

Continuing to target the dynasty politics of Congress on the second consecutive day of his campaign in Karnataka, PM Modi said "this vamshoday will ignore their own party senior leaders, while our antyodaya will make a tea seller the Prime Minister."