Sadhvi Pragya Thakur had said that former Mumbai ATS chief Hemant Karkare died as she had cursed him. 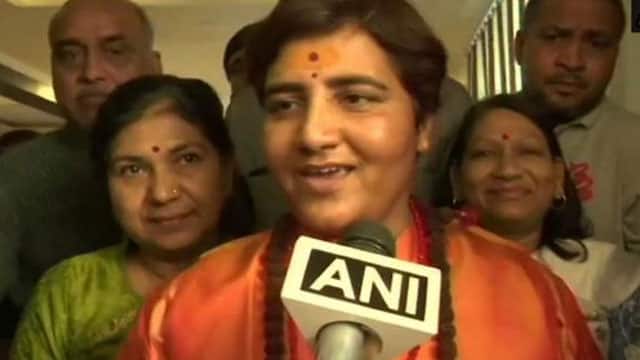 BHOPAL: A complaint has been filed against Sadhvi Pragya Thakur, who is contesting the 2019 Lok Sabha election from Bhopal on BJP ticket, for her controversial remarks on 26/11 terror attack martyr and former Mumbai Anti-Terrorist Squad (ATS) chief Hemant Karkare.

''The state's electoral body has taken cognizance of the matter and the same is under inquiry,'' the Chief Electoral Officer said.

It may be recalled that Sadhvi Pragya Thakur has courted controversy for saying that the Mumbai ATS chief, Hemant Karkare, was killed during the 2008 Mumbai terror attacks because she had cursed him.

BJP's Lok Sabha candidate from Bhopal had asserted that she had cursed Karkare that he will be destroyed completely and he passed away soon after that.

The newly-inducted BJP leader had accused Karkare of abusing and torturing her.

Sadhvi Pragya Thakur is set to file her nomination from the seat on April 23.

Thakur joined the BJP on Wednesday and, thereafter, the party announced her candidature.

Thakur is an accused in the 2008 Malegaon explosion case in which seven people were killed. She was in jail for nine years in this case and is presently out on bail.