The former Congress president was unhappy with the dark theme used on the manifesto as she wanted lighter colours on the cover.

Sources told WION that Sonia Gandhi spoke to Rajeev Gowda, the head of party's research department minutes before the release of the manifesto at Congress headquarters in New Delhi and made it clear to Gowda that she was not pleased with the colour scheme of party's manifesto.

Sources added that the former Congress president was unhappy with the dark theme used on the manifesto as she wanted lighter colours on the cover.

Gowda, who was also the convener of the manifesto committee of Congress, admitted that Sonia Gandhi had a word with him and said, "We did not put leaders' face on the manifesto because we wanted to put people on the cover. This cover is a departure from past and decision was reached after many rounds of meeting which included senior leaders like Sam Pitroda," he said.

Sonia Gandhi checked out the manifesto and suggested that photograph published on page nine of the manifesto was the right one to be used as the cover image. In the photograph Congress president Rahul Gandhi can be seen sitting with a group of rural women with ghoonghat (veil). 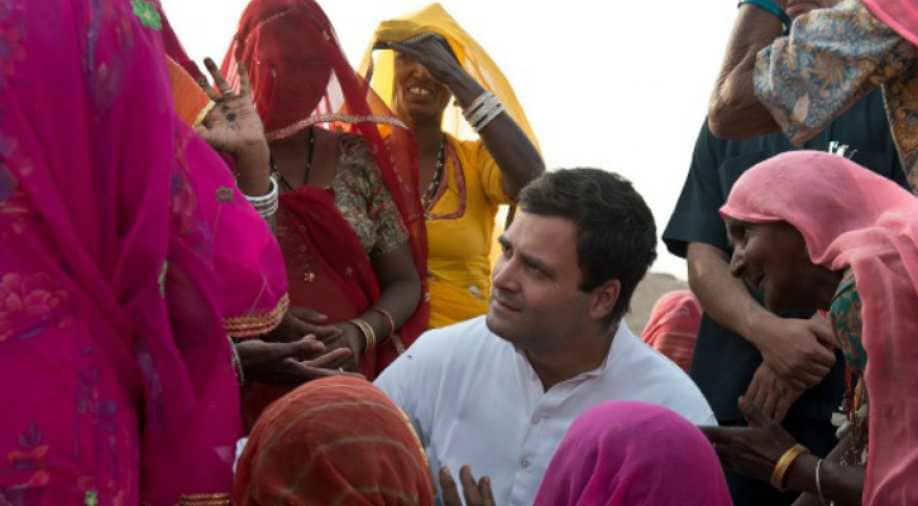 (The photo which Sonia Gandhi wanted on cover page)

Sources said that the members of manifesto committe of the Congress decided against using the said photo because it could have sent a wrong message. "The picture looked very good in context of colour scheme but women were in ghooghat and we were against putting this photograph on the front page," sources told WION.

Gowda, however, stressed that Sonia Gandhi did not say anything about the size of Rahul Gandhi's photograph on the cover and she also did not make any suggestion over the absence of photographs of other Congress leaders on the cover. When WION asked Gowda bout absence of Mahatma Gandhi on the cover, Gowda said, "It is not easy to use Gandhi's picture during election time for various reasons." Rajeev Gowda said that manifesto signals professionalism and showcase a modern approach. When asked whether Sonia Gandhi enquired about absence of other leaders on manifesto, Gowda said, "No conversation of this nature took place." Sources, however, said that Sonia Gandhi was also unhappy over the absence of photographs of older leaders like Jawaharlal Nehru.

Former finance minister P Chidambaram is the chairman of the manifesto committee. The manifesto was released by Rahul Gandhi with a tagline "Congress Will Deliver". In its manifesto, Congress has promised that it will create jobs, takes steps to end arm distress, bring in a single moderate rate of GST and give Rs 72,000 per annum to poor families if it wins the Lok Sabha election.

In its 55-page manifesto, the Congress has also promised to come out with a separate budget for farmers, fill up 22 lakh government vacancies in one year, allocate six per cent of GDP to education, assured 150 days of guaranteed jobs under the MNREGA, enhance women safety and boost healthcare infrastructure.