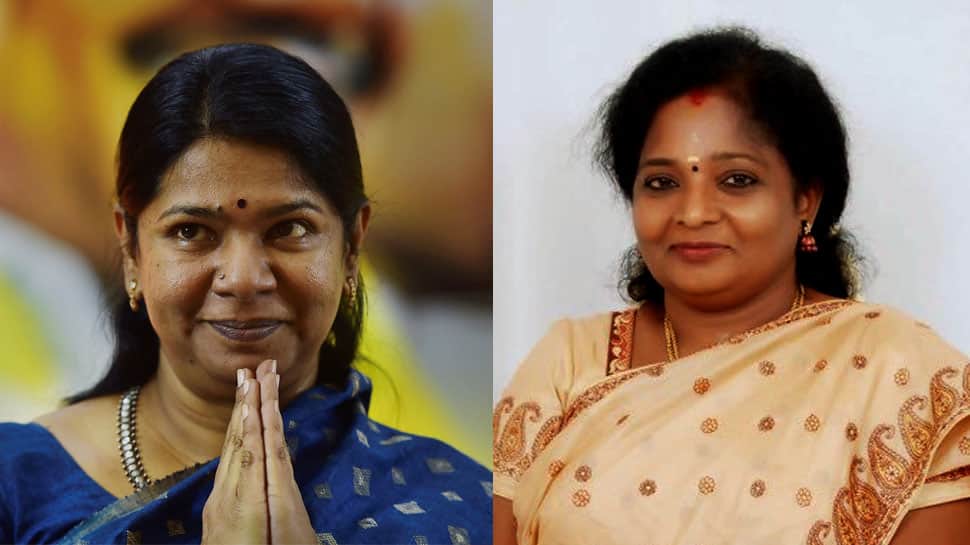 Chennai: The battle for Thoothukudi is what many are looking forward to in current Lok Sabha polls where Tamil Nadu BJP President Tamilisai Soundararajan is crossing swords with DMK leader and Rajya Sabha member Kanimozhi.

Interestingly the fight is tough between the two women who are daughters of two political leaders.

Kanimozhi is the daughter of late DMK President M. Karunanidhi and the sister of current party President M.K.Stalin.

On the other hand, Soundararajan, is the daughter of Congress leader Kumari Ananthan.

Interestingly, it is Kumari Ananthan`s younger brother H. Vasanthakumar is the Congress candidate from the Kanniyakumari Lok Sabha seat who is crossing swords with Union Minister and BJP`s Pon Radhakrishnan.

There are also other parties in the fray like the Makkal Needhi Maiam (MNM) floated by actor-politician Kamal Haasan, T.T.V. Dhinakaran`s AMMK and Naam Tamilar Katchi.

A total of 37 candidates will be vying for about 14.25 lakh voter`s support.

"Every segment in the constituency have unsorted issues. In the case of the fishermen, there are no roads to their place of dwellings and lack of safety gear for safe fishing," T.P.S. Ponkumaran, the MNM candidate, told IANS.

"In the case of small traders, exporters and importers complying with Goods and Services Tax (GST) provisions and getting refund is a major issue. They say refunds are not happening," Ponkumaran added.

Last May, 13 anti-Sterlite Copper protestors were killed in a police firing and this issue is boiling in favour of Kanimozhi.

"The constituency has good number of Christian population and they are against BJP," Pushparayan, who had contested and lost from Thoothukudi in 2014 elections on behalf of Aam Aadmi Party told IANS.

Citing the sizeable Nadar community population in the constituency Pushparayan said, they seem to back Tamilisai.

Similarly, the Nadar Christians are also it seems in favour of Tamilisai, he added.

According to Pushparayan, the small scale industries are upset at the central government of not fulfilling their demands.

"There should be a bureaucratic/administrative reforms to make lives easy for people of different walks of life," Ponkumaran said.

Speaking about his poll strategy Ponkumaran said: "I don`t look at the strategies of BJP or DMK. My focus is on the small traders, business community, farmers, first time voters and others."

Ponkumaran said in Kovilpatti, farmers have sowed imported corn seeds and the yield has turned to be poor.

Deciding to contest from Thoothukudi well before the elections, Kanimozhi had been spending her time looking at the constituency.

The central government`s decision to reserve 10 per cent jobs for economically weaker section also gives the BJP an edge in Thoothukudi.

At the start, the general feeling was Kanimozhi will have an easy victory. However, the fight seems to have turned tough for her with Tamilisai gaining ground.

Though the Sterlite Copper issue is confined to Thoothukudi town, Kanimozhi is rising across the constituency. Apart from the ill effects of demonetisaiton, GST, NEET against BJP, she also talks about the non-performance of the AIADMK government.

On her part, Tamilisai campaigns on the development plank.

Interestingly the Sterlite Copper issue may fetch votes for BJP as well, as there are people who have lost their jobs, business because of the smelter plant`s closure.

According to a truck driver, he lost his job after the plant was closed.

In Thoothukudi town, people are angry at the AIADMK government for not properly handling the anti-Sterlite protest.

The BJP is expected to get good number votes from Srivaikuntam, Tiruchendur and Vilathikulam as these areas have sizeable population of Hindu Nadars.

According to an auto rickshaw driver in Tiruchendur, the Modi government has done well for the country and his vote is for BJP.

On the other hand, in Thoothukudi, a tea shop employee said he would vote for DMK this time around as nothing has happened in the constituency for the benefit of the people.

Kumar a taxi driver in Thoothukudi told IANS: "Kanimozhi has an edge as the Christian votes will go for her. The closure of Sterlite Copper smelter plant has reduced the pungent smell that one experiences while nearing the plant."

Apart from the minority votes, the DMK is also betting on the splitting of AIADMK votes by Dhinakaran`s AMMK.