Tear my son's clothes, take him to task if he does not deliver: Kamal Nath

Nath has been the longest-serving Member of Parliament (MP) from this Lok Sabha constituency as he served for nine terms and he has now vacated the seat for his son. 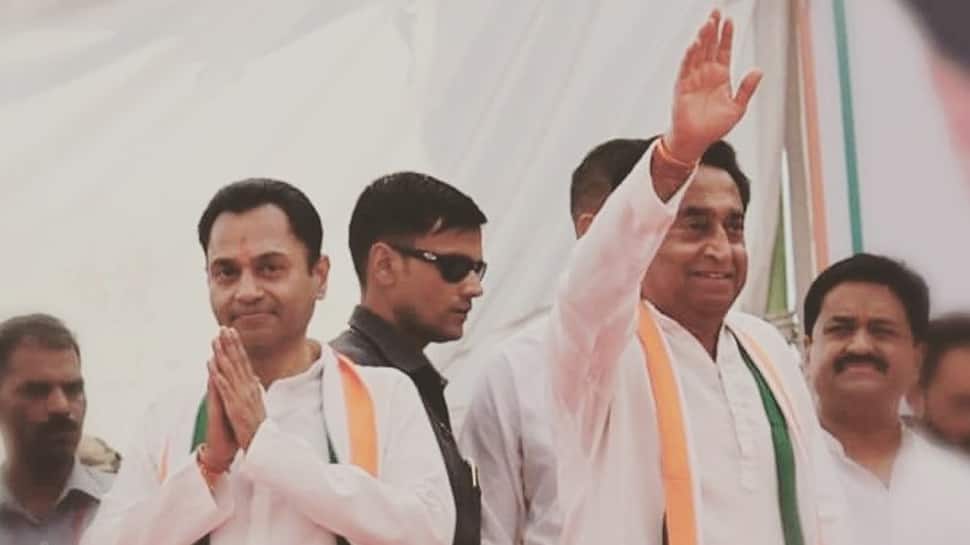 Dhanora (Chhindwara): Tear my son's clothes if he does not deliver, says Madhya Pradesh Chief Minister Kamal Nath as he campaigns for his son Nakul who is fighting his first elections from Chhindwara. Invoking his 40-year-old association with the region, Nath says he has now entrusted the task to serve the people of Chhindwara to his son so that he can work for Madhya Pradesh.

"I am where I am because of the love and strength you gave me. Nakul is not here today but he will serve you. I have given him the responsibility. Take him to task and tear his clothes if he does not deliver," the 72-year-old Congress leader told the locals.

He was speaking at an election rally on Saturday in Dhanora village which comes under the Amarwada assembly seat, about 65 kms from Chhindwara district headquarters. "We will start a new journey and create history," he told the locals.

Nath has been the longest-serving Member of Parliament (MP) from this Lok Sabha constituency as he served for nine terms and he has now vacated the seat for his son.

The chief minister is also contesting bypoll in the Chhindwara assembly constituency as per the legal requirement of being a member of legislative assembly (MLA) for running the state government. Nath says due to his efforts the district has a "distinct identity" when it comes to development.

He hit out at Prime Minister Narendra Modi, saying his promises of ensuring Rs 15 lakh in every Indian citizen's bank account, steps against black money and the decision of demonetisation were just "gimmicks and frauds".

"They (Modi and Chouhan) scream we did this, we did that but tell me if they did anything for you?" Nath says, alleging that the two leaders misled the people.

"I want to tell Modiji that while there are no 'acche din' (good days) for the common man, his (Modi's) days are going to end soon," he says.

Modi "harassed" every section of society and under BJP government's watch, farmers in Madhya Pradesh were shot at and their livelihood was hit too, Nath alleged.

Hitting out at the previous BJP government in the state, he charged they "kicked the farmer in the stomach and pointed a gun at his chest".

The chief minister says his government in the state has shown its intent by delivering on the promises made before the 2018 assembly polls.

"As promised, we initiated waiver of loans of the farmers as soon as we took charge in Bhopal and till now I have done so for 22 lakh farmers. Thirty-eight lakh more farmers will be benefitted soon who have a loan of up to Rs 2 lakh," he says.

Nath says the new Congress government in the state has also reduced the cost incurred by poor people to pay electricity bills.

Chhindwara will vote on April 29 along with the single bypoll for the constituency. In the last general elections, the BJP had won 26 and the Congress secured three seats.