INKredible India: The story of 1967 Lok Sabha election - All you need to know

Two wars, death of two prime ministers, rise of Indira Gandhi, economic slowdown, food shortage and a number of other factors shaped the years leading up to Lok Sabha election 1967. 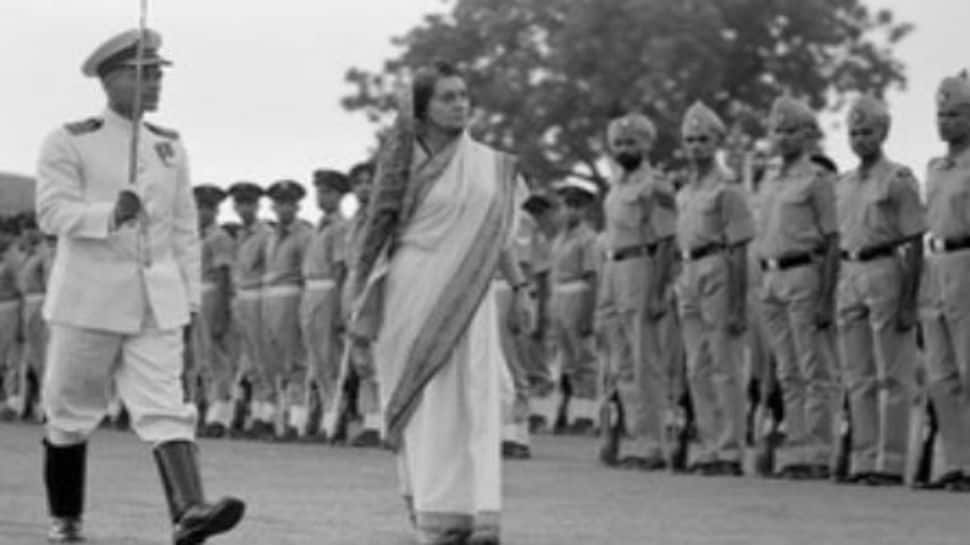 The Lok Sabha election of 1967 was a turning point in the Indian democracy for a plethora of reasons. The 60s so far had been rather tumultuous – the country had fought a war each with China and Pakistan, Jawaharlal Nehru had died paving the way for the rise of Indira Gandhi, the Green Revolution has begun to show its benefits but was still at a nascent stage, the anti-Hindi agitation in Madras began to look ominous, and there were early signs of a threatening Naxal movement.

Between the election in 1962 and 1967, India faced grave dangers and some of its most significant policies – domestic and international – looked like it would come apart at the seams.

The most significant of these was the war with China that greatly undermined Nehru’s diplomatic policy and raised significant questions on his ability to lead the country on a global scale. The Panchsheel Agreement between India and China – signed in 1954 – promised everlasting peace between the two countries but Chinese offensives in Ladakh and across the McMahon Line in October of 1962 not only shattered any notion of peaceful co-existence but also exposed India’s lack of military preparedness. Despite exemplary valour showed by Indian soldiers, thousands were killed. It was largely agreed that while China’s international image suffered a hit, the country had achieved its military objectives and had forced Nehru to abandon India’s Forward Policy which were a set of tactical strategies to eventually push back Chinese from territories claimed by the Indian government.

The Indian National Congress was still the most dominant political party in the 1960s. And by far. Nehru’s death may have dealt a big blow to the political party and to the country considering how there was still no one in the fray who could match his nation-wide appeal and aura. Nonetheless, party president K Kamaraj played a key role in ensuring that Nehru was replaced by Lal Bahadur Shastri as the country’s PM.

There were also many who wanted Morarji Desai – and not Shastri – to replace Nehru. And then there were those who felt that daughter Indira was best placed to replace her father.

Shastri, however, was soon seen as an all-weather choice to ensure the party remains cohesive.

A little over a year after Nehru’s death and Shastri being made the country’s PM, India had to fend off an aggressive West Pakistan in the War of 1965. West Pakistan had launched Operation Gibraltar which looked to put its troops in Jammu and Kashmir. India responded by declaring war. Still hurting from defeat at the hands of the Chinese, India poured in troops in Jammu and Kashmir. While India did deliver a sloid blow to Pakistani forces with aggressive designs, the war itself made Jammu and Kashmir a permanent bone of contention between the two countries.

Critics of the time – and many even now – say that India should not have taken the matter to the United Nations because it allowed Pakistan to gain territory in Jammu and Kashmir. This territory, till date, is called Pakistan-occupied-Kashmir by India.

The Tashkent Declaration eventually brought an end to the war but shortly after its signing, Shastri died of a heart attack. Gulzarilal Nanda took over as a interim PM before Indira was eventually elected to lead the Indian National Congress.

With these two wars, upheavals in the Indian National Congress, the domestic challenges posed by an emerging Naxal movement and food shortage despite the Green Revolution, and the anti-Hindi movement in Madras, the political scene just before the 1967 Lok Sabha election was riveting, complex and challenging.

There were 27 states and union territories in India at the time of the 1967 Lok Sabha election. These were:

The number of states in India went up significantly between the years of 1962 and 1967.

* Chandigarh was established as a UT in 1966

* Goa participated in General Elections for the first time

The political parties contesting the 1967 election were:

The registered but unrecognised parties were:

The Lok Sabha election of 1967 was to take place after India had had four Prime Ministers. There were 520 single-member constituencies – up by 26 from the election five years back. Of these, 77 were SC constituencies while another 37 were reserved as ST constituencies.

Two decades since independence, India had taken several steps forward as a responsible democracy but grave challenges remained aplenty. Besides, the absolute dominance and influence of the Indian National Congress was not what it once was. Voices of dissent within the party had only gained several decibel levels while emergence of several political alternatives – regional as well as national – looked to give a platform to the masses. “The 1967 elections, half a century ago, witnessed the unfolding of the fractures in the nation’s social and political edifice after the electoral system was set up in 1951-52,” wrote V Krishan Ananth, a political commentator, in DNA. “By 1967, the Indian nation had matured and taken the shape of concrete blocks and was being put to test by various political formations to build their own edifices. It is true that some blocks have dissolved to merge into others while some have broken up into separate formations and yet others have emerged and stayed on to ally either with the BJP or the Congress, in any way that suited them at different points of time.”

Another major hurdle of the time before the election was in the slowing down of the Indian economy. The actual growth was at a measly 2.4% as against the objective of 5.6% per annum.

Meanwhile, the Election Commission of India continued with its endeavour of reaching out to as many people of voting age as possible. At this point in time – and till 1988 – the minimum age to vote was 21.

The Lok Sabha election in 1967 was held between February 17 and February 21.

The election was meant to be a litmus test for Indira Gandhi. And she is believed to have taken it up as a challenge to show she was always meant to be at the helm of Indian politics. Already the PM after the death of Shastri, Indira’s critics – both within the INC and outside – felt she was not suited to the sweat and toil of Indian politics. Yet, it was Indira remained stoic in her resolve to show that this is where she belongs. Reports of the time suggest that even when she was hit by a stone during campaigning in Bhubaneshwar, a bleeding Indira refused to be taken away and took to the mic to condemn hooliganism.

Under such circumstances, political parties and leaders began their campaigning with earnest. Promises were galore, visions aplenty and people at large were told issues of national defence, food shortage and economic slowdown would be addressed on priority.

In the end, the voters showed that while the Indian National Congress was still some distance away from being completely sidelined, Indira did enjoy most of the confidence that Nehru had before her.

It was, however, not an ideal outcome for the Indian National Congress. The party won less than 300 seats for the first time and got 283 – a fall by 78 from the election five years ago. The vote share went down to a little over 40%. 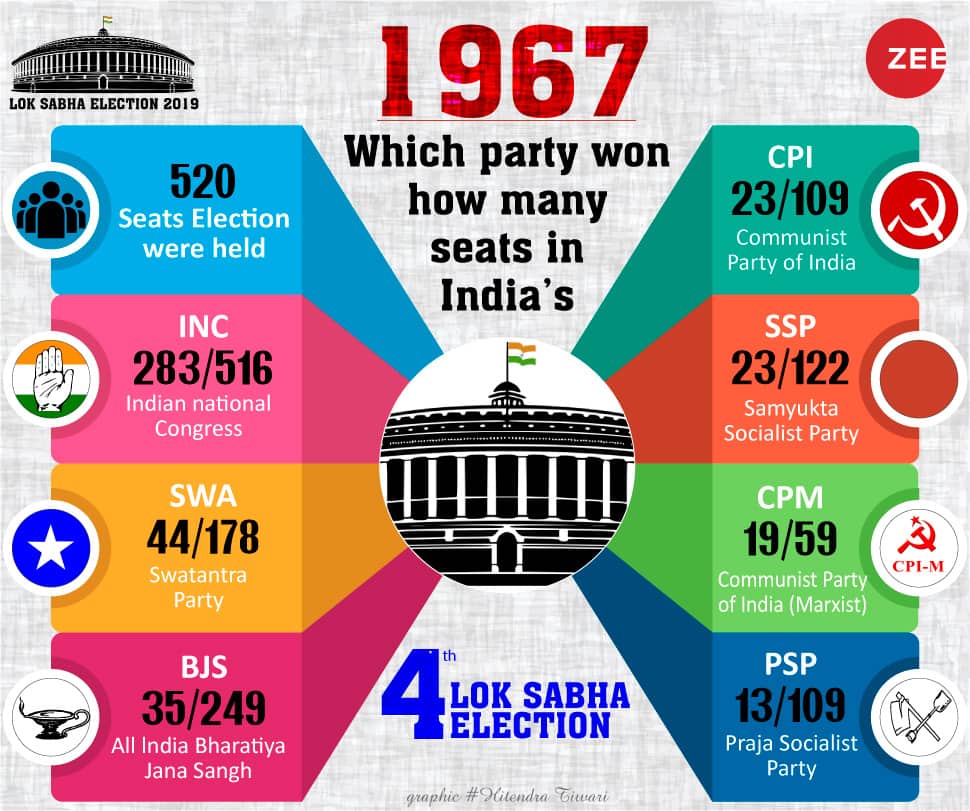 Significantly, the Indian National Congress suffered grievous wounds with seven members of the Indira cabinet suffering losses. Moreover, only about half of all the states at the time voted Congress to absolute majorities in the state legislatures.

Hrinmay Karlekar, a noted journalist, wrote shortly after the elections that popular disenchantment and regional grievances had hit the Indian National Congress. In an article published by The Harvard Crimson and dated March 11 of 1967, he pointed out that food shortage, devaluation of the Rupee and a notion that the government was succumbing to Western pressures were primary reasons for Congress’ spiral. He also noted that the culture within the party had come to haunt it. "Congress would not have fared as badly as it did had its own house been in order. Unfortunately, it was not. Twenty years of uninterrupted enjoyment of power had made it smug and arrogant, engendered in its top leaders a false confidence in their own invulnerability," wrote Karlekar. "One reflection of this could be seen in their uncompromising attitude towards the dissidents inside their party, the continued and relentless exclusion of the latter from all position of authority. The bitter infighting that followed this led to large-scale expulsions and resignations and in West Bengal, Orissa and Bihar ex-Congressmen formed parties which contested the official Congress in the elections. In other states, where no such extreme development took place, Congressmen often allied secretly with opposition candidates to defeat candidates belonging to rival factions of their own party."

In Congress’ comparative setback were gains for rival parties. The most prominent gains were for Swatantra Party which claimed the second spot with 44 seats. It was the single-largest party in the opposition. Five other parties won seats in double digits – a first in Indian elections at the time.