While BJP has claimed that TMC vandalised a statue of Ishwar Chandra Vidyasagar to gain false sympathy, TMC has put out video clips claiming these are proof of BJP's violence. 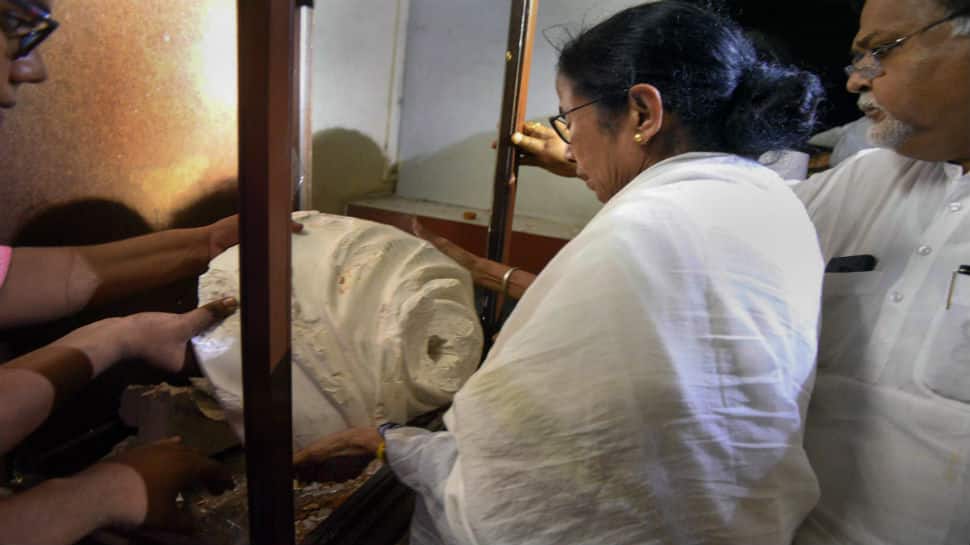 Kolkata: Trinamool Congress on Wednesday lashed out against incidents of violence witnessed in Kolkata a day earlier and showed video clips which it claimed nails Bharatiya Janata Party's 'lies.'

BJP president Amit Shah had held a roadshow in the city on Tuesday but violent clashes had taken place towards its end between supporters of TMC and BJP. A statue of Ishwar Chandra Vidyasagar was vandalised at Vidyasagar College with both parties blaming each other for it. While Shah has said no BJP worker was involved in the act of vandalism at the college, TMC held a press conference in which MP Derek O'Brien said Shah was lying and that there was enough video proof of BJP workers indulging in violence and acts of vandalism. "Ishwar Chandra Vidyasagar is the founder of Bengal Renaissance. He has been an integral part of education in Bengal. No one from here can ever disrespect him. We have video clips which clearly show who destroyed his statue," he said, before proceeding to play two clips in which people wearing saffron-coloured clothes are seen pelting stones and damaging what appeared to be a statue.

While TMC has claimed responsibility for the authenticity of the video clips, it also said that it would show these to the Election Commission.

O'Brien then proceeded to accuse BJP of bringing goons from other states to indulge in violence in Kolkata. "You want to do a procession? Please do that. Anyone can come and hold processions but stick to that. Don't bring outside goons," he said in what was a repeat of the accusation made by TMC chief Mamata Banerjee from a day earlier. TMC has also said that members of its student's wing were showing black flags to BJP supporters during the rally and it is this that provoked them to break out in anger.

BJP, however, has put the blame on TMC.

Earlier in the day, Shah had lashed out at TMC for triggering the violent events of Tuesday and said that Mamata is fearing a defeat in Lok Sabha election 2019. "Violence is only happening in West Bengal. If BJP is responsible for violence, why is it not happening in other states? Mamata workers vandalised Vidyasagar's statue to gain false sympathy," he said. "The gates of the college were locked. All BJP workers were outside. So who opened the gates of the college? Who opened the classroom doors? BJP workers did not have the keys."

Even as BJP has intensified its verbal attack against TMC, two FIRs have been filed against Shah by the Kolkata Police. And while a BJP delegation met Election Commission of India on Tuesday and demanded that Mamata be banned from campaigning for instigating her supporters, a TMC delegation is scheduled to meet ECI officials later on Wednesday.