The Congress ministers and MLAs also said that accountability must be fixed and those responsible for party's disastrous performance in Rajasthan must face action. 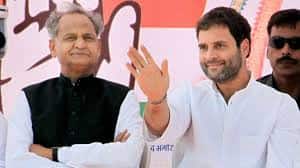 JAIPUR: After Congress president Rahul Gandhi rebuked Rajasthan Chief Minister Ashok Gehlot for putting the interests of party behind in order to promote his son, several ministers and MLAs in the state have demanded that the party high command must take action over party's poor performance in Lok Sabha poll. The ministers and MLAs also said that accountability must be fixed and those responsible for party's disastrous performance must face action.

According to sources, during the Congress Working Committee (CWC) meeting on Saturday, Rahul blamed Gehlot and some other Congress leaders for showing interest in only building the political career of their sons and not doing anything substantial for the party.

Asked about remarks made by the Congress president at the CWC meet, Gehlot told PTI that they were "quoted out of context". He, however, stressed that Rahul Gandhi is the president of the party and he can say anything he deem fit in party interest. The Rajasthan chief minister added that Rahul Gandhi has the authority to make any changes he wants to initiate in the party.

"For any leader in the country, priority should not be any position and the only priority should be how to revive and strengthen the Congress party and and how they can contribute," he was quoted as saying by PTI.

Meanwhile, Rajasthan Transport Minister Pratap Singh Khachariyawas said that Rahul Gandhi will definitely fix the accountability for party's poor show in the state. Khachariyawas' cabinet colleague, Bhanwarlal Meghwal, also echoed similar feelings and said that accountability be for the defeat. "Whatever Rahul Gandhi said is right...Action should be taken against those people who are responsible for this defeat so that a message goes to the workers. The Congress workers are also very angry," he said.

The Congress had failed to win even a single seat out of 25 seats at stake in Rajasthan. The result is very surprising because the Congress came to power in the state last year and the party had ample time to earn the trust of voters.