Will be happy to contest from Varanasi if Congress chief asks: Priyanka Gandhi

Priyanka was in Wayanad to campaign for her brother and Congress president Rahul Gandhi. 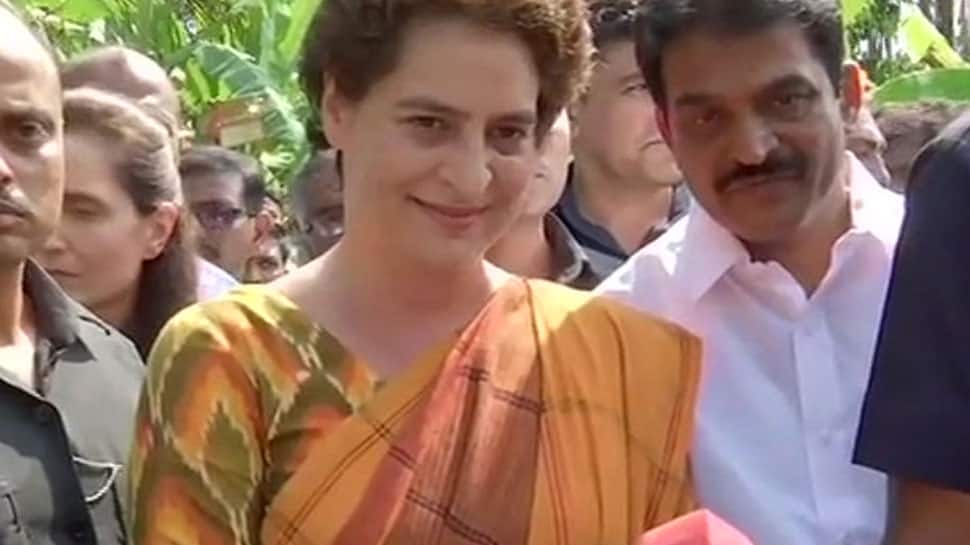 WAYANAD: Congress general secretary Priyanka Gandhi on Sunday said that she would be happy to contest from Varanasi – Prime Minister Narendra Modi's Lok Sabha constituency - if asked by her brother and party president Rahul Gandhi.

"I am ready to contest and will contest from Varanasi if Congress president asks me," Priyanka Gandhi said minutes before departing from Wayanad in Kerala.

Priyanka Gandhi Vadra on being asked if she will be contesting from Varanasi: If Congress President asks me to contest, I will be happy to contest. #LokSabhaElections2019 pic.twitter.com/rbMagjccOF

Priyanka made these remarks after winding up her two-day trip to the Wayanad Lok Sabha constituency from where Rahul Gandhi is contesting, apart from his Amethi seat in Uttar Pradesh.

While campaigning for his brother in Wayanad, Priyanka made a scathing attack on the Narendra Modi government for making false promises to people and ignoring the country`s farmers.

Campaigning in Wayanad, Priyanka told a gathering that the Modi government has ditched the farmers but the Congress-led UPA government, if it comes to power, will take care of all their needs.

"In the five years, PM Modi has divided the country. He takes care of the rich and the mighty but ignores the needs of the huge farmer community in the country. The BJP said they will double the income of the farmers and would deposit Rs 15 lakh into the bank account of every person, but for Rahul Gandhi, justice and truth matters," she said in Mananthavady, where she arrived in a helicopter after landing at Kannur airport.

She earlier met the family members of CRPF trooper Vasanth Kumar who was killed in the February 14 Pulwama terror attack.

From there, Priyanka Gandhi went to Pulpally where a mammoth gathering was waiting for hours to see her.

"The Modi government has dashed the hopes of the farmers and has taken on the people who fought for their rights. Congress will empower all of you and will never create any difficulty for you all," she said at her public meet there.

This was Priyanka Gandhi`s second visit to Wayanad. On April 4, she accompanied Rahul Gandhi when he filed his nomination papers.

Union Minister Smriti Irani, who is contesting against Rahul Gandhi in Amethi, was also supposed to reach Wayanad on Saturday to campaign for NDA constituent Bharat Dharma Jana Sena Chairman and Wayanad candidate Tushar Vellapally but her trip was postponed for Sunday.

Apart from Vellapally, Rahul Gandhi is also facing PP Suneer of the Communist Party of India, who is the candidate of the ruling Left Democratic Front. State CPI-M Secretary Kodiyeri Balakrishnan, also campaigned here on Saturday.

The state will vote on April 23 to elect its 20 Lok Sabha members.