While the meeting has raised many eyebrows, both political leaders have termed it just a 'courtesy call'. 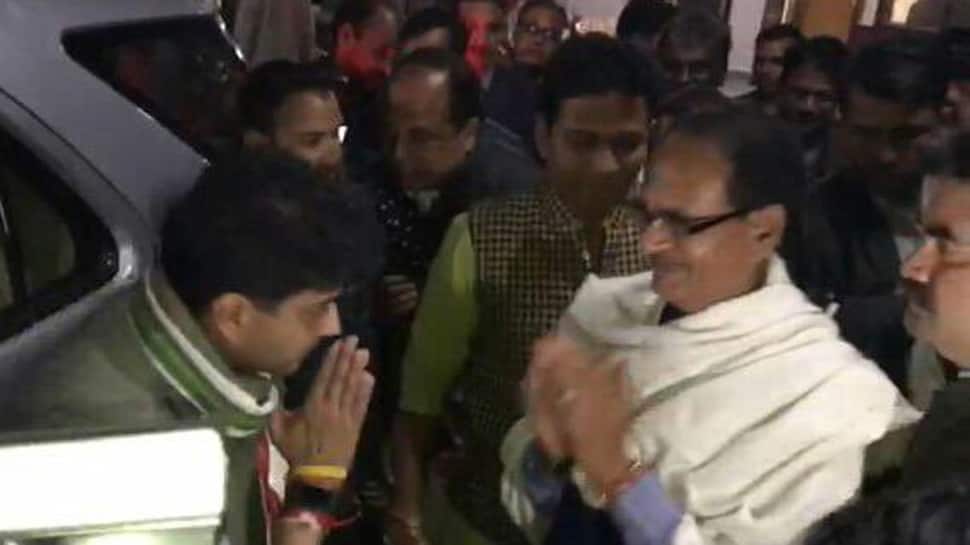 A late night meeting between Congress MP Jyotiraditya Scindia and former Chief Minister Shivraj Singh Chouhan on Monday set the political temperatures soaring in Madhya Pradesh. The unscheduled meeting between the state leaders lasted for close to 40 minutes. After the meeting, Chouhan stepped out of his house to see Scindia off till his car.

While the meeting has raised many eyebrows, both political leaders have termed it just a 'courtesy call'. Sharing photographs of the meeting, Scindia tweeted in Hindi saying people should not be making any sort of political inferences.

Scindia had led the Congress campaign during the Madhya Pradesh Assembly elections 2018 against Shivraj to dislodge the Bharatiya Janata Party (BJP) government, which has been power in the state since 2003. Shivraj, on the other hand, had weaved BJP's campaign around 'Maaf karo Maharaj, hamara neta toh Shivraj' slogan targeting Scindia.

However, the two leaders said that a lot is said during elections and both have moved on. Scindia added that the government and the Opposition should work together. "I am not the person who would live his life with bitterness. Raat gayi, baat gayi (let bygones be bygones)," he said.

Shivraj also agreed to the Congress MP's statement saying that he has no grudges. "Koi gila nahin, koi shikwa nahin, (I have no complaint or grudge),” he said.

The two leaders, however, did not reveal the details of the conversation.

Scindia had arrived in Bhopal to offer his condolences to the family members of two of his close confidantes who had died recently.

Scindia was one of the main contenders for the CM post in the state after the Congress won the Assembly elections in December. However, after intense parleys with Congress chief Rahul Gandhi and UPA chief Sonia Gandhi, the top post was handed over to party veteran Kamal Nath. There were reports that Scindia was offered the Deputy's post which he declined.

Shivraj, too, recently pulled himself out of the race for the post of the leader of Opposition in the state.