Uddhav Thackeray-led Shiv Sena had accused the BJP of not respecting the ''50-50 power-sharing deal,'' which it says was reportedly agreed by the two parties before the assembly election in Maharashtra.

Fadnavis had earlier changed his Twitter bio to ''caretaker chief minister'' after resigning from his post on November 8. 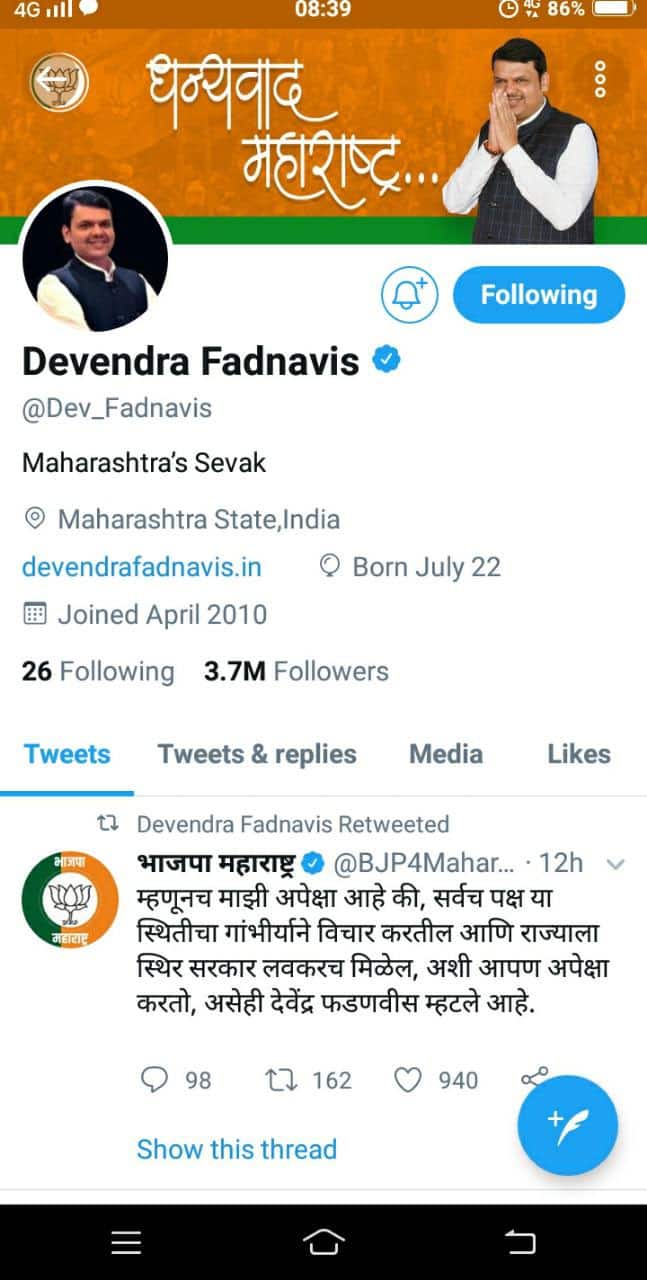 It may be recalled that both the BJP and Shiv Sena have been blaming each other for the present political deadlock and the imposition of President's Rule in Maharashtra.

Uddhav Thackeray-led Shiv Sena had accused the BJP of not respecting the ''50-50 power-sharing deal,'' which it says was reportedly agreed by the two parties before the assembly election in Maharashtra.

While, the BJP had said that no such deal was ever agreed between the two sides.

Shiv Sena has been adamant on its demand for rotational chief minister in Maharashtra as a pre-condition for sharing power with the BJP in Maharashtra as it projected Uddhav Thackeray's son Aditya for the top job – a demand rejected by the BJP.

As the differences between the two parties widened, Shiv Sena opted out of the Narendra Modi government at the Centre by pulling out its lone MP Arvind Sawant from the Union cabinet over the power-sharing agreement in Maharashtra.

"I took oath on May 30 as Union Minister of Heavy Industries and Public Enterprises. BJP went back from their pre-election promises. During the Lok Sabha election, it was discussed that there would be equal sharing of power including the chief ministerial post. BJP is denying this now," Sawant had told reporters.

As the events unfolded, BJP later informed the state's Governor that it would not be forming government in Maharashtra owing to its relations with its ally Shiv Sena that turned bitter after Assembly polls.

The NDA alliance `Mayayuti` had received an absolute majority in Maharashtra after the BJP won 105 and Shiv Sena bagged 56 seats in the 288-member Maharashtra Assembly.

Sharad Pawar-led Nationalist Congress Party (NCP) had hinted at backing Shiv Sena on a condition that the latter severs its ties with ally BJP.

NCP has 54 MLAs while its alliance partner Congress bagged 44 seats in Assembly polls.