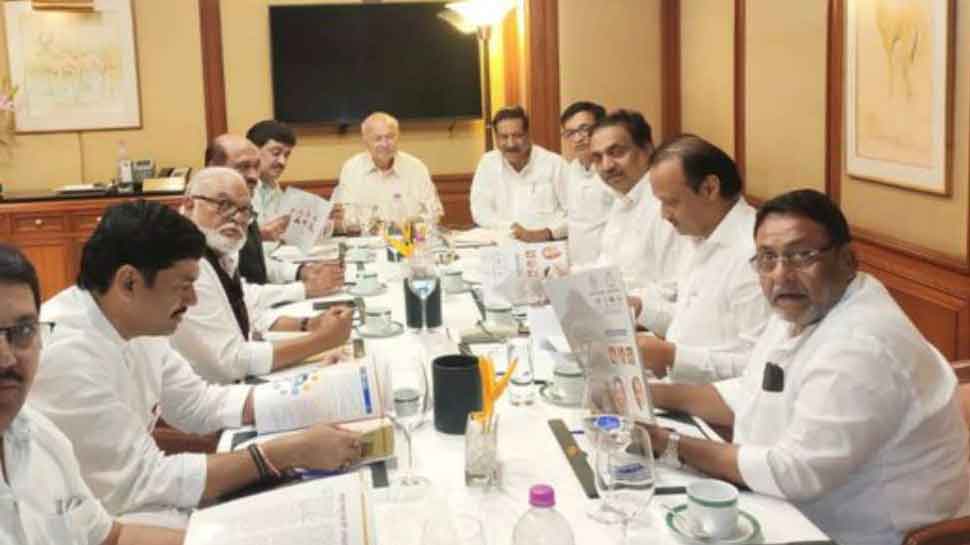 MUMBAI: A crucial meeting of the NCP-Congress joint coordination committee to work out modalities for power-sharing in Maharashtra is currently underway at the Trident Hotel in Mumbai, said sources on Thursday. According to reports, senior NCP leader and party president Sharad Pawar's nephew Ajit Pawar is also present in the meeting along with top state Congress leaders.

Ajit Pawar had earlier said that he will head to Baramati on Thursday since the proposed joint coordination committee meeting was postponed. A day after indicating their willingness to form the government, the two parties had constituted a joint-coordination committee to discuss the nitty-gritty of power-sharing agreement between them.

The two sides have reportedly agreed to share the chief ministerial position for 2.5 years each, while the Congress – the third partner in the power-sharing deal – has settled for the post of deputy chief minister for five years. However, no agreement could be reached on the Maharashtra Assembly Speaker's post.

The three parties are likely to make a formal announcement as soon as a broad consensus is reached on the power-sharing deal in Maharashtra and the common minimum programme for the Shiv Sena-NCP-Congress government in the state.

Shiv Sena had earlier sought support from Pawar's NCP and the Congress, severing its 25-year-old old ties with the BJP after the saffron party rejected its demand for rotational chief ministership and 50-50 power-sharing agreement.

The Nationalist Congress Party (NCP) and the Congress had earlier said that they can support Shiv Sena to end the political deadlock in the state.

It may be recalled that the BJP, despite emerging as the single-largest party in Maharashtra, had declined to form the government since its lacks majority in the 288-member Maharashtra assembly, while the Shiv Sena failed to give a letter of support to the state's Governor Bhagat Singh Koshyari.

As the political logjam continued, Koshyari recommended the imposition of President's Rule in Maharashtra, which was later approved by President Ram Nath Kovind on Tuesday.

Meanwhile, BJP president and Home Minister Amit Shah on Wednesday, November 13, slammed the opposition parties, for raising a ruckus over the imposition of President`s Rule in Maharashtra. Shah said it was `a meaningless exercise to gain public sympathy` because anyone can still approach the Governor if they have a majority to form the government.

The Home Minister told ANI, "We were ready to form the government with the Shiv Sena. But there were certain things of Shiv Sena we could not have agreed."

In his first interview since Maharashtra`s results were out on October 24, Shah said that during the campaign for Maharashtra assembly polls, the BJP leaders including Prime Minister Narendra Modi said that Devendra Fadnavis will continue to be the Chief Minister if BJP-Shiv Sena alliance is elected back to power.

"Nobody contradicted it. Now some mew conditions have come up. We have reservations on this and the party will take a decision at an appropriate time," he said, adding "I only want to say that the ruckus over the President`s Rule is a meaningless exercise to gain public sympathy and nothing else."

Shah also took a dig at the Congress over its allegations that the President`s Rule was imposed in a hurry and its ally NCP was not given enough time to show the majority, adding "Probably they do not ask their allies."

Amit Shah's challenge to Shiv Sena-NCP-Congress: Approach Maharashtra Governor if you have majority