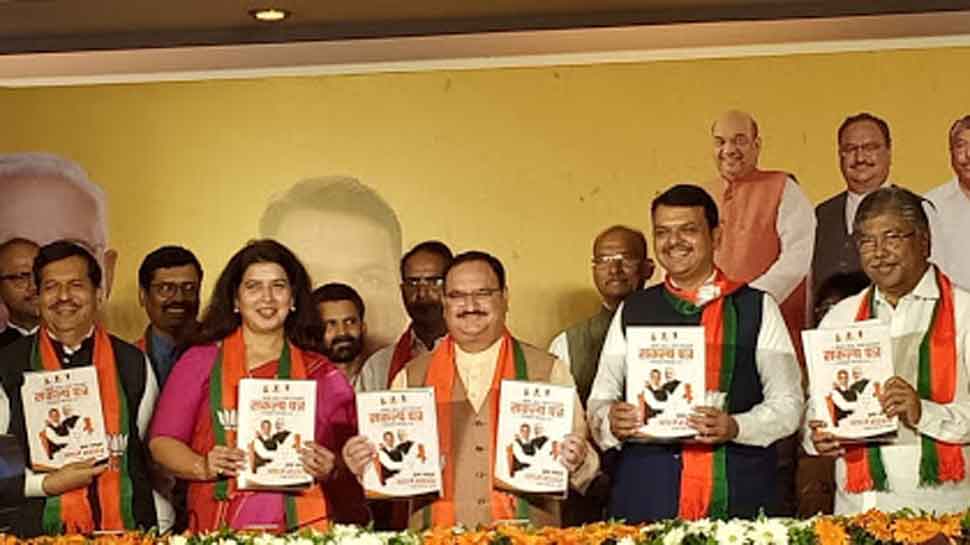 The BJP, which described its poll manifesto as a 'Sankalp Patra', demanded Bharat Ratna demand for Jyotiba Phule and his wife Savitribai Phule and Vir Savarkar.

Releasing the manifesto, Nadda said that it has been drafted keeping in focus the man standing at the last pedestal of the society. "We are committed to bringing the poor, villages, farmers, tribals and other backward classes into the mainstream," he said at the launch.

"There's another new initiative for Maharashtra. Everyone at the age of 30 is going to be screened for Hypertension, Diabetes, tuberculosis, leprosy, for dental and mental care, ideally to reduce the disease bud. For education, the enhancement of ambit of scholarships and financial support has been well-thought. We've ideate about quality institutions for quality education," he said.

The 44-page manifesto also pledges to provide one crore employment in the next five years and making Maharashtra a trillion-dollar economy. It also promised to invest five crores in the infrastructure, providing 12 hours of electricity daily to farmers in the state and making Maharashtra drought-free in the next five years. It also stated that till 2022, all houses in the state will start getting pure drinking water.

Here are some other key features in the manifesto:

Rehabilitation of all martyrs families (Army, Paramilitary and police)
All village panchayat to be connected via broadband internet
Every district to have ATAL Vigyan Kendra
Govt hospital to have increased Ayurvedic treatment facility
Sanitary napkin in Rs 1 for women
Ambedkar memorial to be completed by 2020
Every district to have a yoga center
Homes for homeless by 2022
All workers to be brought under social security net
Quality health and education to get special focus

BJP ally Shiv Sena released its manifesto for the Maharashtra Assembly elections on October 12 with a plethora of promises to woo voters including establishing a chain of 1000 'Bhojnalaya' (eateries) across the state that would serve quality and nutritious food at a meager cost of Rs 10.

Sena's other major poll promises in the manifesto were reduction in domestic electricity rates by 30 percent for up to 300 unit consumption, special bus services in villages, Rs 10,000 per year as financial aid to the needy farmers, farm loan waiver, fixing price of fertilizers, making individual farmers beneficiaries of crop insurance scheme.

On the other hand, the Congress-NCP alliance released its manifesto on October 7, promising reduced penalty under Motor Vehicles Act (MVA), immediate farm loan waiver, and zero-interest loan for higher education among others. Their manifesto also talks of action to deal with climate change. The other important promises include a 100 percent subsidy for drip irrigation, minimum support price (MSP) for dairy farm products based on the production cost to increase farmers' income.

The Congress-NCP alliance also promised to enact laws to reserve 80 percent of jobs for locals in new industries. They also announced to give free laptops to 10 lakh girls who clear SSC examination.

The elections for 288-member assembly will be held on October 21 while the counting will be taken up on the 24th of the month.