The Sena edit comes against the backdrop of the BJP's consistent claims since last three weeks that it will return to power with Fadnavis as the CM, though it has not disclosed from where it will get the numbers to achieve the magic figure of 145 (simple majority) in the 288-member assembly.

New Delhi: The Shiv Sena mouthpiece 'Saamana' sharpened its attack on the Bharatiya Janata Party (BJP) in its latest editorial piece saying Maharashtra is seeing a downfall because of leaders who don't keep their promises. The article, without taking any party's name, added that Chhatrapati Shivaji Maharaj's name is being used for political mileage.

"Chhatrapati Shivaji Maharaj is not owned by any single party. Instead, all 11 crore citizens of Maharashtra are descendants of the great Indian warrior king. Shivaji Maharaj's name has already been used in political business. A statue of Shivaji Maharaj has been erected in Gujarat; however, not even a single brick has been laid for the great warrior in Maharashtra," the article read. 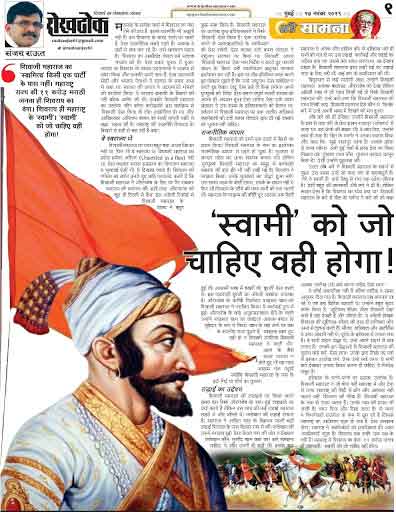 The latest Sena edit comes against the backdrop of the BJP's consistent claims since last three weeks that it will return to power with Fadnavis as the CM, though it has not disclosed from where it will get the numbers to achieve the magic figure of 145 (simple majority) in the 288-member assembly.

The crestfallen BJP has adopted a 'wait-and-watch' policy as the Sena broke off its alliance earlier this week and is now engaged with the NCP-Congress to form the next government in the state which is currently under central rule.

In the meantime, Shiv Sena has decided not to attend the meeting of the National Democratic Alliance (NDA) which is scheduled to be held later in the evening today. "I have learnt that the meeting (of NDA constituents) is being held on November 17. We had already decided against attending the meeting considering the developments in Maharashtra...our minister resigning from the central government," Sena leader Raut said.

Raut made the announcement after meeting his party chief Uddhav Thackeray. Replying to another question on government formation in Maharashtra, he added that ''the process is underway and things are normal.''

Uddhav's party decided to call off nearly three-decade-old ties with BJP after years of acrimony in the alliance that peaked after the recent assembly elections in the state, with the Sena accusing the BJP of breaking its promise of equal division of power in the state.

The Sena has been demanding rotational chief minister for 2.5 years - a demand which has been categorically rejected by the BJP, which said that no such deal on power-sharing took place ever.

Since then, the party has held talks with longtime rivals the Congress and Sharad Pawar's Nationalist Sanjay Congress Party (NCP) to cobble up a majority.

The three parties - Shiv Sena, Congress and the NCP - have agreed to a draft on the common minimum programme - for running a coalition government in Maharashtra and have been holding hectic parleys to sort out the nitty-gritty of the power-sharing arrangement.

Both Sena and NCP had confirmed their readiness to form a government in Maharashtra along with Congress, which will complete a full term, ruling out mid-term elections in the state that is under President's Rule after no party won a majority in polls last month.