Aaditya said that a delegation of Shiv Sena leaders met the Governor to request financial aid for farmers and fishermen affected by untimely rain. 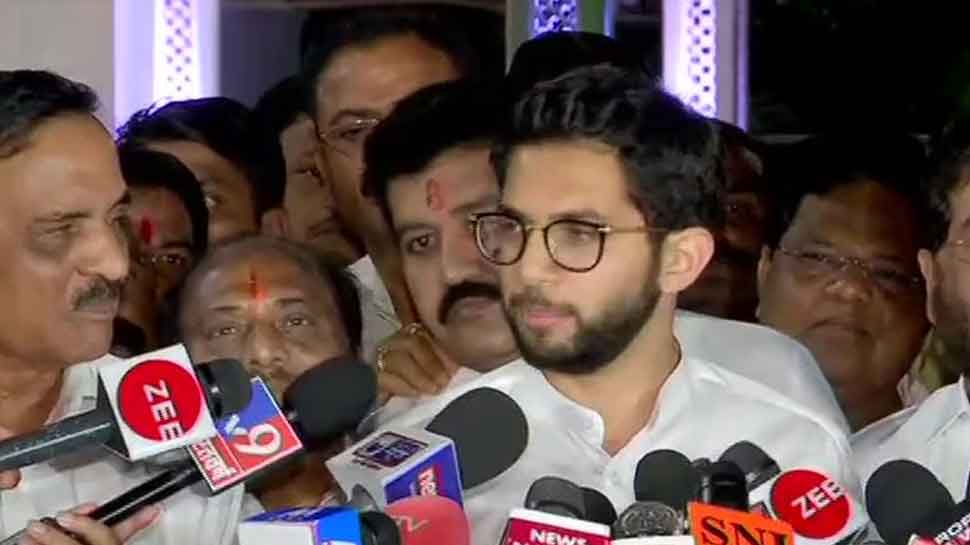 MUMBAI: Amid the ongoing tussle over power-sharing with the BJP in Maharashtra, Shiv Sena leader Aditya Thackeray on Thursday said that his father and party chief Uddhav Thackeray will take a final call on government formation in the state.

Aaditya also admitted that the delay in government formation in the state is not good. “I will not talk about government formation,” he told reporters after the meeting. “Uddhav Ji will say whatever needs to be said on that...his word is final,” he said.

On being asked about talks with the BJP, Aaditya said that his party hasn`t heard anything from the saffron party with which it is embroiled in a tussle.

Talking to reporters, the young Thackeray scion reiterated that his father will take the final call on government formation.

Aaditya, who had emerged victorious from the Worli constituency in the recently concluded assembly election in Maharashtra, made these remarks while interacting with media persons after meeting Governor Bhagat Singh Koshiyari.

He, however, said that he "discussed farmers issues" with the state's Governor.

Aaditya said that a delegation of Shiv Sena leaders met the Governor to request financial aid for farmers and fishermen affected by rain.

Aditya Thackeray, Shiv Sena after meeting Maharashtra Governor: We requested Governor to provide assistance to farmers and fishermen who suffered damages due to recent rains. He has assured us that he himself will talk to the Centre. pic.twitter.com/Wdyj3oJIir

“He has assured us that he himself will talk to the Centre,” the Thackeray junior said. “Our priority is to help people.”

"As an elected MLA, it was my privilege to propose the name of @mieknathshinde ji as the leader of the Shiv Sena Parliamentary Party for the working the legislature. @prabhu_suneel ji has been elected as chief whip of the party for the legislature," Aaditya said in a tweet.

It may be recalled that this was Shiv Sena leaders’ second meeting with the Governor this week. On Monday, both the BJP and Sena leaders had met Koshyari separately.

The Shiv Sena wants BJP to respect and implement the ''50-50 power-sharing deal'', which was reportedly agreed by the two parties before the assembly election. However, the BJP has not given any assurance to it yet.

Shiv Sena leader Sanjay Raut had on Wednesday night denied that his party had softened its stand on the demand for sharing power equally with the saffron party.

On Tuesday, incumbent Maharashtra Chief Minister Devendra Fadnavis had said he would remain at the helm of the state for the next five years. He also rejected the Shiv Sena’s claim that it had been promised a power-sharing deal before the Lok Sabha elections. Following this, the Shiv Sena cancelled a scheduled meeting with BJP leaders.

But, on Wednesday, Fadnavis said that his party and the Shiv Sena would soon form a government.

He said that the people had given a mandate for the “Mahayuti (grand alliance)” and dismissed rumours of an alternative political formation.