We will never support BJP; will take action against NCP MLAs: Sharad Pawar

Nationalist Congress Party (NCP) chief Sharad Pawar on Saturday said that he and his party will never support or endorse the BJP while promising to take action against his party MLAs who defected under the leadership of his nephew Ajit Pawar to form a joint coalition govrnment in Maharashtra. 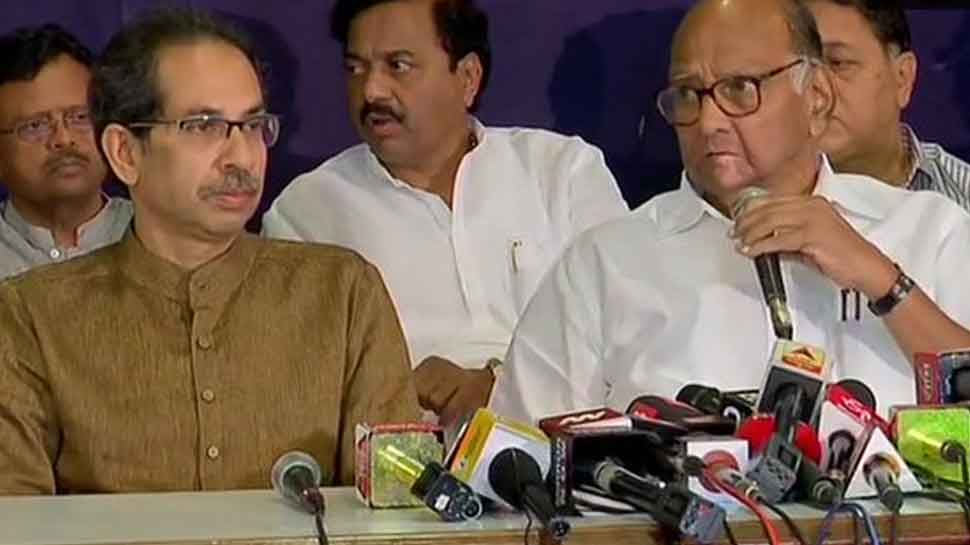 Mumbai: Nationalist Congress Party (NCP) chief Sharad Pawar on Saturday said that he and his party will never support or endorse the BJP while promising to take action against his party MLAs who defected under the leadership of his nephew Ajit Pawar to form a joint coalition government in Maharashtra.

"We are strictly against the BJP  and will always oppose it,'' the NCP veteran said while addressing a joint press conference with Shiv Sena chief Uddhav Thackeray at the YB Chavan Centre in Mumbai.

''Congress, Shiv Sena and NCP leaders came together to form the government. We had the numbers. We had our official numbers - 44, 56 and 54 MLAs with us who had supported the government. Several independents were also with us and we had numbers around 170,'' Sharad Pawar on the ongoing process for government formation.

"Then I came to know, under Ajit Pawar, some NCP leaders had gone there. After a while, we saw that Devendra Fadnavis was made the CM and Ajit Pawar deputy CM," the NCP chief said.

Pawar also promised to take strict action against his party MLAs who betrayed him.

''We trust our MLAs and believe that an honest NCP worker will never join hands with BJP,'' Pawar said.

"Whoever went and whoever is going to go, we don't know of it. I want to tell them two things - anti-defection law exists and so their efforts will be wasted."

''We will analyse the situation and take appropriate action,'' the veteran Maharashtra politician said.

The Maharashtra stalwart added that ''action against Ajit Pawar will be taken as per the procedure.'' ''I don't know if he (Ajit) has done this fearing the investigating agencies or not,'' he told reporters.

Attacking the Fadnavis government, Sharad Pawar said, "Public opinion is against forming the government with BJP. If such actions are still taken, people of their constituencies won't support them. If they resign and go for a re-election, we will do everything to defeat them. All three parties."

Pawar had earlier clarified that the decision of going with BJP to form the government in Maharashtra is of his nephew Ajit Pawar, who took as Deputy Chief Minister today.

"Ajit Pawar`s decision to support the BJP to form the Maharashtra Government is his personal decision and not that of the Nationalist Congress Party (NCP). We place on record that we do not support or endorse this decision of his," Sharad Pawar had tweeted.

Earlier, Maharashtra Chief Minister Devendra Fadnavis on Saturday took oath for the second term and said that he will provide a stable government in the state following entering into an alliance with the NCP.

Fadnavis also hit out at his former ally Shiv Sena and said that they tried to stitch an alliance with other parties even when the people gave a clear mandate.

"People had given us a clear mandate, but Shiv Sena tried to ally with other parties after results, as a result, President`s rule was imposed. This is not right for the state. That is why Maharashtra needed a stable government not a `khichdi` government," he said.

BJP, with 105 seats forged alliance with the Nationalist Congress Party which bagged 54 seats to garner the majority figure.

Earlier, NCP supremo Sharad Pawar had claimed that there was a consensus on Sena chief Uddhav Thackeray as chief minister of the alliance government.