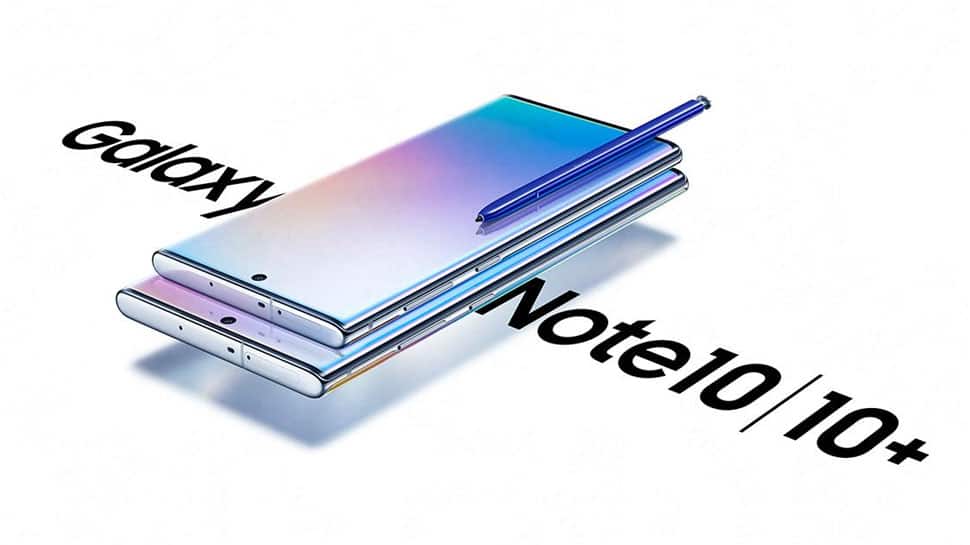 New York: Taking productivity and creativity to the next level, Samsung has unveiled its most powerful line-up of Galaxy Note10 smartphones with an enhanced S (Stylus) Pen experience.

The India pricing was yet to be announced.

Running Android 9 (Pie) operating system, the "made in India" smartphones would be launched in India on August 20, with sales starting from August 23. "Every element of the Galaxy Note10 was designed to help users achieve more. Whether they're finishing a big project for work, capturing and editing a video, or playing their favourite mobile game, the Galaxy Note10 will help them do it faster and better," DJ Koh, President and CEO of IT and Mobile Communications Division, Samsung Electronics, told a packed house at "Galaxy Unpacked NYC" event in Brooklyn late Wednesday.

In Galaxy Note10, triple camera at the back has an 16MP ultra wide lens, a 12MP wide angle sensor and a 12MP telephoto lens.

It also houses a 10MP selfie camera in the middle, which gives both the devices a symmetrical shape unlike the Galaxy S10 series.

The Note10+ has a large 4,300mAh battery with superfast charging technology and the smaller Note device comes with a 3,500mAh battery.

"The Galaxy Note10 series re-imagine the promise for the modern Note fan who who effortlessly flows between ideas and endeavours at a moment's notice," said Koh.

One put-off is absence of 3.5mm headphone jack, which is still a nostalgia among some users despite phones bidding goodbye to it.

The 5G-ready model of Note10+ has slot for one Nano SIM and one MicroSD slot (up to 1TB).

When it comes to S Pen, it has some cool features this time, like gesture navigation.

The uni-body S Pen allows users to jot down notes, instantly convert their handwriting to digital text in Samsung Notes, and export it to a variety of different formats, including Microsoft Word.

Users can now customize notes by shrinking, enlarging, or changing the colour of the text.

Air actions allows you to control certain aspects of the device using gestures with the S Pen.

By opening up the Air actions SDK, developers can create customized controls that give users the ability to play games or use their favourite applications using gestures, said Samsung.

The Galaxy Note10 extends Samsung DeX's capabilities, making it easier for users to work between their phone and a PC or Mac.

With a simple, compatible USB connection, users can drag and drop files between devices, and use their favourite mobile apps with a mouse and a keyboard, while keeping their data secure on their phone through Samsung Knox.

With one click, Note10 users can connect to their Windows 10 PC where they can see notifications, send and receive messages.

According to German market research firm GfK data, Samsung has over 60 per cent volume and value market share in smartphones priced over Rs 30,000.

Galaxy Note has a loyal fan following in India because of its performance and productivity features.

According to Counterpoint Research, the Note 10 is expected to post sales similar to that of its predecessor.

Samsung to launch Galaxy Note10 devices in India on August 20