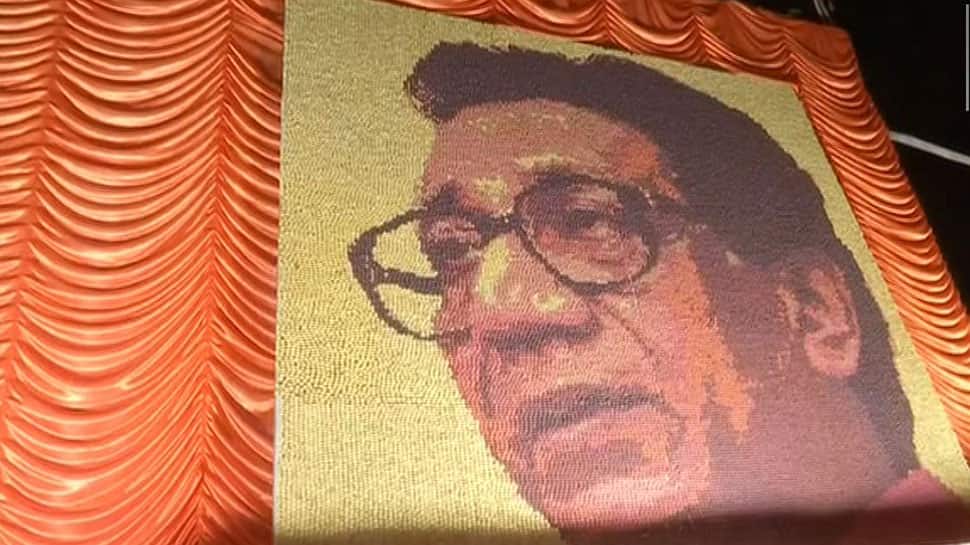 “Balasaheb Thackeray had a special relationship with rudraksha, so I wanted this portrait to be made of it,” says Raut.

Maharashtra: Artist puts up a portrait of Balasaheb Thackeray in front of Shiv Sena Bhavan, Mumbai on the occasion of his birth anniversary. The portrait is made up of 33,000 Rudrakshas. pic.twitter.com/PMhuHS2i75

The beaded portrait has been put up in front of Shiv Sena Bhavan in Mumbai to dedicate his birth anniversary.

The Maharashtra Cabinet on Tuesday approved Rs 100 crore for the construction of a memorial for late Thackeray. The memorial is set to come up at a location in Shivaji Park area where earlier Mumbai mayor's bungalow was located. The prime sea-facing property, measuring around 11,500 sqm, was handed over to the 'Balasaheb Thackeray Rashtriya Smarak Nyas' (trust) last year, clearing the decks for the memorial.

The land, also a heritage site, will formally be transferred by the local civic body to the trust set up to construct the structure at an event in Mumbai on Wednesday. The event is expected to be attended by Chief Minister Devendra Fadnavis, Shiv Sena president Uddhav Thackeray, Mayor Vishwanath Mahadeshwar, Brihanmumbai Municipal Corporation (BMC) chief Ajoy Mehta and members of 'Balasaheb Thackeray Rashtriya Smarak Nyas' (trust), including BJP MP Poonam Mahajan, a source said.

Balasaheb Thackeray was born on January 23, 1926, in Pune to social activist and writer  Keshav Sitaram Thackeray and mother Ramabai.