Semi-arid areas on the planet could become carbon sinks in the future despite the fact that they hold the carbon for a short period compared to tropical forests, according to a study in Australia published Thursday. 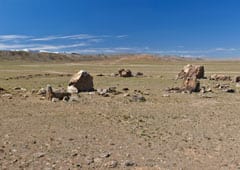 Sydney: Semi-arid areas on the planet could become carbon sinks in the future despite the fact that they hold the carbon for a short period compared to tropical forests, according to a study in Australia published Thursday.

The study, led by Spanish biologist Pep Canadell, reveals that the Australian savannah was one of the main reasons for the increase in absorption of carbon dioxide by terrestrial plants in 2011.

Land vegetation absorbs around 2.6 billion tonnes of carbon dioxide out of the 10,000 million that is emitted into the atmosphere due to human activity, a quantity that reached 4.1 billion in 2011.

"The land absorbed (in 2011) more man-made CO2 than ever before recorded," said Canadell, executive director of the Global Carbon Project, to the local channel ABC.
Until now, scientists have considered tropical forests like the Amazon to be the main sinks of CO2.

The study, on the other hand, attributes the 2011 figures to the increase in vegetation in the semi-arid areas of Australia, South America and Africa, especially that of the grassy components.

"We never thought the savannahs of the world could potentially have this effect," Canadell said.

According to the biologist, the vegetation growth was due to the increased rain caused by the global phenomenon La Niña between 2010 and 2011.
He added that as these areas hold carbon for a relatively short term in comparison to tropical forests, their implications for climate change still needed to be studied.