Nearly 20,000 security personnel from central and state forces kept a a close vigil across the state, including on national highways and railway tracks which the protesters had blocked for several days in February. 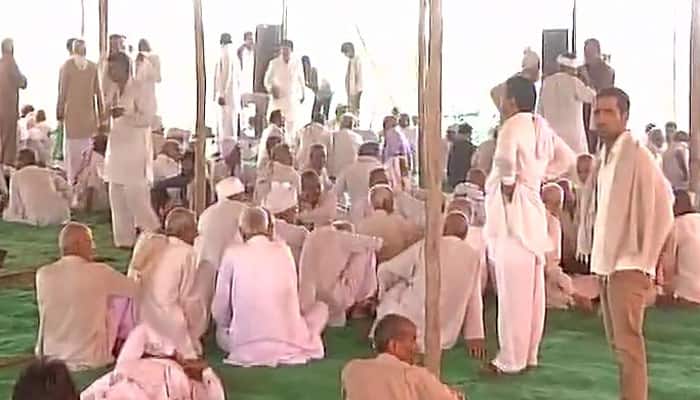 Chandigarh: Three months after their violent agitation left 30 people dead, Jat leaders in Haryana on Sunday renewed their quota stir, drawing lukewarm response amid tight security by the BJP government which had drawn severe flak over its handling of the protest last time.

"The state remained peaceful and no untoward incident was reported from any part. Also, the traffic was normal as neither any highway nor any railway line was blocked by the protesters," Haryana's Additional Chief Secretary (Home) Ram Niwas said.

He said that in many districts, no protests were held by Jat community members. At some places where the protesters sat on dharna, they submitted memorandums to the Deputy Commissioners and lifted the dharna after some time, he said.

Nearly 20,000 security personnel from central and state forces kept a a close vigil across the state, including on national highways and railway tracks which the protesters had blocked for several days in February.

Jat leaders in Jassia village of Rohtak district, the epicentre of violence during the stir, held a 'havan', as the second round of the agitation started on a tepid note with influential Khap panchayats and some Jat factions distancing themselves from the protests.

All India Jat Aarakshan Sangharsh Samiti (AIJASS), which gave the call for the protest, said they held dharnas in 15 of the state's 21 districts and in Delhi and will hold more protests in the national capital as well as other states in the region to garner support for their demand.

He said the AIJASS will also hold symbolic dharnas at other places including Delhi, where one such protest was held this evening, and other states to garner support for the demands raised by the Jats in Haryana.

"We started from Haryana today. We also held dharna in Delhi this evening. Afterwards, we will decide on further dates for Delhi," Malik said, adding in days to come these 'symbolic dharnas' will also be held in states including Madhya Pradesh, Uttar Pradesh, Rajasthan and Uttrakhand.

The Jat protesters are demanding quota under OBC category, withdrawal of cases registered against community members during the previous stir, status of martyrs for those killed and jobs for their next of kin, besides compensation for the injured.

The agitation this time was restricted to so called 'Jat belt' comprising districts like Jhajjar, Sonipat, Rohtak, Panipat, Hisar, Fatehabad and Jind.

"There are small groups of protesters mainly in the rural areas. The total number throughout the state would have been no more than 2000," an official said.

At places like Yamunanagar, Panchkula, Faridabad, Gurgaon, Palwal and Sirsa, no dharna was held.

"It has been peaceful. We are fully geared up to meet any kind of situation during the agitation," Haryana's Additional Director General Police (Law and Order) Muhammad Akil said.

Prohibitory orders were clamped at sensitive places in eight districts and security forces conducted flag marches as the administration geared up to ensure that there is no repeat of earlier incidents when 30 people were killed, property worth hundreds of crores of rupees destroyed and key routes blocked by agitators.

Protesters at Jhajjar submitted a memorandum to the district sub-divisional magistrate seeking release of Jats arrested for February's protests and cancellation of FIRs registered then.

The state government today asserted that it was pursuing the matter related to reservation to Jats in court and warned of strict action against if anyone tried to disturb law and order.

"In a democratic set-up, there cannot be any objection to holding a peaceful demonstration. However, those who disturb law and order, would be dealt strictly as per law," Khattar said.

The state Home Secretary also warned that some anti-social elements may try to vitiate the peaceful atmosphere of the state and urged the people not to be misled by rumour mongers.

"The government is maintaining vigil. Video recording is also being done and anyone who tries to indulge in vitiating peaceful atmosphere of the State would be dealt as per law," Niwas said.

He also said that ahead of the fresh round of Jat stir, cases have been registered against people indulging in such activities through social media.

He also urged the people, especially the elderly and children, not to stay in the open due to prevailing heat wave.

After the Jat agitation, which paralysed normal life in Haryana and affected Delhi and other neighbouring states too, the state government recently brought in laws to provide reservation for Jats and five other communities under a newly carved Backward Classes (C) category.

However, the High Court stayed it, acting on a public interest litigation, after which some Jat groups announced the fresh stir.

In Hisar, members of the Jat community started an indefinite dharna at a stadium in village Mayyar away from railway tracks and national highway, police said.

Addressing the protesters, Jat leaders accused the Haryana government of not being serious towards their demand for reservation.

The Jat leaders said in case the government did not respond to their demands in a positive manner, they would be left with no other option but to take to the streets.

In Jind, the AIJASS members staged a dharna at Jhanj Kalan village near Jind-Patiala highway in support of their demands.

In the wake of severe criticism for failing to check violence, the Khattar Government had set up Prakash Singh Committee whose inqury report had indicted 90 officials for "deliberate negligence" during the stir.

The panel, in its 451-page report, had said that "administrative paralysis" had gripped the state and the "highest functionaries in the government failed to show the kind of guidance, direction and control that is expected in a crisis of such proportions".

Although Jat leaders have promised that the protests will remain peaceful, the Haryana Government is taking no chances.

"Fifty-five companies of paramilitary personnel drawn from CRPF, ITBP and BSF have been deployed in sensitive districts in the state," Niwas said. One company comprises nearly 100 personnel.

Apart from it, state police forces were deployed and all leaves were cancelled. "An estimated 20,000 security personnel are keeping vigil," a senior polic official said.