Heat wave to continue for next few days in North India, temperatures may soar to 47°C: IMD

MeT department has predicted a delay of six days for the onset of monsoon this year. 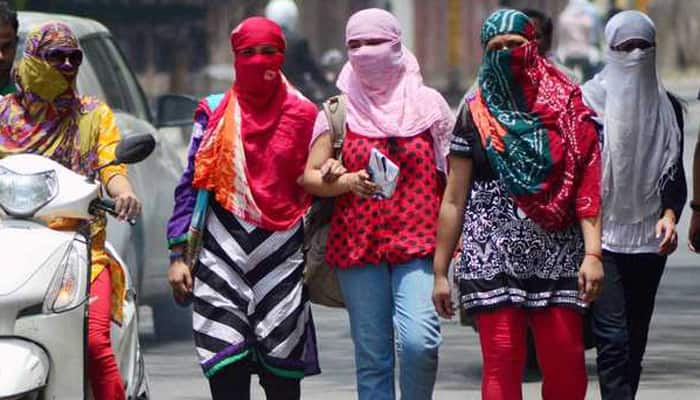 Delhi: Even as North India continued to reel under intense heat wave condition on Tuesday, the Indian Meteorological Department (IMD) said that temperatures could go up to 45 to 47 degrees Celsius in large parts of north and northwest India for the rest of the week.

“These conditions are likely to spread... during May 17-21. They are likely to abate gradually during the remaining part of May,” IMD was quoted as saying by the website.

The MeT department has already predicted a delay of six days for the onset of monsoon this year.

However, several areas of Tamil Nadu, Kerala and south interior Karnataka are expected to get a good amount of rainfall owing to a depression.

Scorching heat continued to affect normal life in other parts also where the day temperature in Kota, Sriganganagar, Vanasthali, Chittorgarh, Dabok, Jaipur and Ajmer was 46.3, 46, 45.6, 44.5, 44.3, 44 and 43.7 degree Celsius respectively, according to MeT Department in Jaipur.

In Uttar Pradesh too, Banda and Allahabad recorded temperature in excess of 46 degrees Celsius.

Haryana and Punjab also continued to the grip of severe heat wave, with maximum temperatures hovering well above the normal limits, and Hisar once again scorching at 45.4 degrees Celsius.

In Delhi also the mercury continued to rise settling at 43.3 degrees Celsius, three notches above the season's average with the MeT office warning of hotter days ahead.

Rains and rough seas caused damage to hundreds of houses in coastal areas in Thiruvananthapuram, Alappuzha and Ernakulam districts, officials said, as per PTI.

Authorities have given directions to evacuate people in low lying areas, where reports of houses being damaged have come in. Relief camps have also been opened to shift the affected people in these areas, they said.

Parts of Tamil Nadu also continued to receive rains for the second day today, and the MeT Department said the low pressure area over Bay of Bengal has intensified into a depression and is likely to bring heavy rainfall in the next two days in coastal areas of the southern state.

But, the rain brought the mercury down in southern states as Chennai recorded 34 degrees Celsius while Thiruvanathapuram posted 31.5 degrees Celsius.

In eastern region, heat wave conditions also persisted in Odisha today with Sambalpur recording a high of 42.2 degrees Celsius, while the coastal part of the state experienced respite as the mercury dropped.

While Sambalpur turned out to be the hottest place in the state, Sonepur sizzled at 42.1 degrees and both Hirakud and the coal town of Talcher recorded a maximum temperature of 41.4 degree Celsius, the Meteorological Centre said.