No 'Suryanamaskar' this Yoga Day, 'Om' not compulsory: Govt

The International Yoga Day is celebrated on June 21 since last year, with Prime Minister Narendra Modi taking a lead in this. 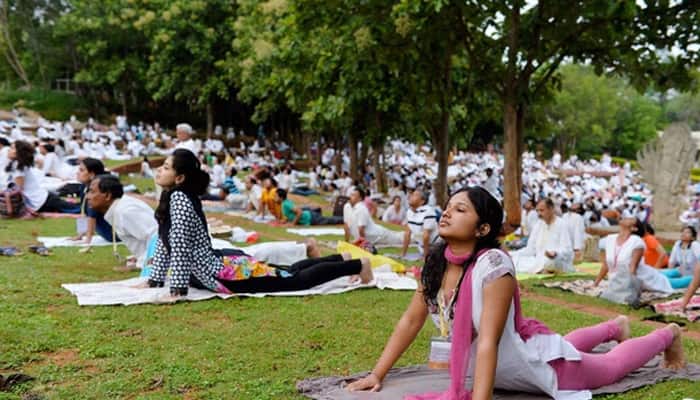 New Delhi: 'Suryanamaskar asana' will not be part of this year's Yoga Day celebrations and chanting of 'Om' won't be compulsory even though Yoga is incomplete without it, Ayush Minister Shripad Naik said on Wednesday about the June 21 event which is expected entail a collective cost of hundreds of crores of rupees.

"The Suryanamaskar asana...Last year also we had not taken it. It is a complex exercise. It is difficult to do in 45 minutes and for people who are new to the exercise. Therefore we have not kept this one," Naik, whose ministry is the nodal agency for organising the annual celebrations, told the media.

There has been a controversy over this asana, with Muslim groups saying their faith does not allow such a practice.

The International Yoga Day is celebrated on June 21 since last year, with Prime Minister Narendra Modi taking a lead in this. Modi performed the Yoga at Rajpath here last year and this time, he will do so in Chandigarh.

Naik also dismissed the controversy related to chanting of 'Om' during the event and it has not been made compulsory.

"There is always some opposition whenever some good work is done. There is no opposition this year to it. We have not made it compulsory.... We have made those people who are opposing understand this and it seems they have understood," he said, but added that "without OM, yoga cannot be complete."

Chanting of 'Om' has also been a matter of controversy, with Muslim bodies saying members of their faith cannot do so.

There was a controversy recently too over the UGC's directive asking universities and colleges to follow Ayush ministry's yoga protocol that begins with chanting of 'Om' and some Sanskrit shlokas during Yoga Day celebrations on June 21.

The government, however, had insisted that last year's protocol has been maintained and no changes have been made. "There is no compulsion to chant 'Om'," it had earlier said.

About whether a holiday will be declared on June 21, Naik said, "It is not needed, nobody has demanded that. Last year, also no such demand came....Yoga's time is early morning. It will go on around 8 am...There is no need of a holiday."

However, "if the demand comes, I will request the Prime Minister to do so (declare holiday)," he said. The Yoga Day this year falls on Tuesday while last year it was a Sunday.

Ayush Ministry officials said that yoga has been added in the physical activity sessions in various schools for class six to tenth but it has not been made compulsory.

Naik said that a circular has also been issued by the HRD Minister to all the schools to include yoga and while many schools have adopted it, for others, "work is in progress".

"HRD minister has sent circular to schools. Work is in progress. All schools have started adopting," Naik said.

Asked about the budget for the celebrations, Ministry secretary Ajit Sharan said every ministry is spending its own money and Ayush Ministry is not supporting anybody in terms of funds for celebrating this.

"Although if all is taken collectively, it may be hundreds of crores. But from the AYUSH Ministry side, the sum is around Rs 15 crore," he said.