PM Modi said that rich nations must shoulder their responsibilities in protecting the environment, with funding and transfer of clean technology to poor nations. 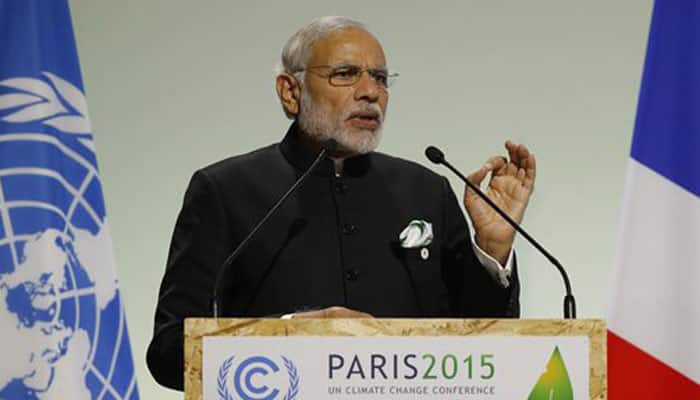 Paris: Prime Minister Narendra Modi on Monday launched a global solar alliance comprising some 120 nations to tap solar energy and said that it would be "morally wrong" on the part of the developed countries to shift the burden of reducing emissions on developing countries like India, asserting that poor nations had a right to burn carbon to grow their economies.

He said that the rich nations must shoulder their responsibilities in protecting the environment, with funding and transfer of clean technology to poor and emerging economies without further delay.

“Over the next few days we will decide the fate of this planet. We hope advanced nations will assume ambitious targets and pursue them sincerely,” PM Modi said at the UN Climate Change Conference.

He said that India will provide about $30 million to build the secretariat infrastructure.

“Vast majority of humanity is blessed with generous sunlight round the year, but many are without a source of power. We will succeed if we have the wisdom to craft a collective partnership that balances responsibilities and capabilities,” PM Modi said adding, “We look to the developed countries to mobilize $100 billion annually by 2020 for mitigation and adaptation.”

He said that India is gradually dependence its on fossil fuels through levies and reduction in subsidies, and switching to alternative sources where possible.

"Today, when the energy sources and the excesses of our industrial age have put our planet in peril, the world must turn to Sun to power our future," the prime minister had earlier said at the alliance launch event with French President Francois Hollande.

"This is an alliance that brings together the developed and developing countries, governments and industries, laboratories and institutions in a common enterprise," he said, offering to host this initiative in India, providing the requisite land and also making a contribution of $30 million for the proposed secretariat.

During his various engagements at the 21st Session of the Conference of Parties (COP-21) under the UN Framework Convention on Climate Change and side events, Modi said India has done its bit by targeting 175 GW of renewable energy in seven years, and said the world must also act with urgency, led by rich nations.

"The entire world, 196 nations, have come together to shape the future of this world and the health of our planet," said Modi.

"We want the world to act with urgency. We want a comprehensive, equitable and durable agreement, which must lead us to restore the balance between humanity and nature, and between what we have inherited and what we will leave behind," he said.

At another event on innovation also attended by President Hollande, US President Barack Obama and Bill Gates, among others, Modi said it was imperative to make renewable energy much cheaper and more reliable, and the conventional sources cleaner, while developing newer sources that are green.

"Our innovation initiative should be driven by public purpose, not just market incentives, including on intellectual property. That also means strong public commitment by suppliers to developing countries. That will make clean energy technology available, accessible and affordable for all."

"India will work closely with US on 'Mission Innovation'," he assured Obama, referring to the initiative to dramatically accelerate public and private involvement on cutting-edge technologies to address climate change, provide affordable clean energy and create commercial opportunities in this area.

Among his other engagements, the prime minister opened the India pavilion at the convention to showcase the country's commitment towards renewable energy and climate change while also seeking to demonstrate that the world also needs to look beyond to focus on climate justice.

"India's progress is our destiny and the right of our people. But we must also lead in combating climate change," said Modi, while assuring 40 percent of India's installed energy capacity from non-fossil fuels by 2030.

"We have a target for renewable generation of 175 gigawatt by 2022. We have got off to a good start, with nearly 12 GW likely to be installed by 2016, more than three times the current capacity," he said.

India has already submitted for the consideration of the conference, what is called the Intended Nationally Determined Contributions sought from the 196 member states of the convention, offering to cut its emission intensity by 33-35 percent by 2030.

"So, we approach the negotiations under the United Nations Framework Convention on Climate Change in a spirit of partnership -- which must be based on the principles of equity and common, but differentiated responsibilities," Modi said.

Alluding to what rich nations needed to do to protect the environment, he made it clear that a pact reached in Paris must be one of partnership, where resources and technology are shared with poor and developing economies, so as not to deprive people who live between want and hope.

Modi also unveiled a book authored by him on innovations, "Convenient Action", at an innovation summit.

Ahead of the summit, the prime minister had sought to remind the developed world, through an article in The Financial Times of London, that it has a moral imperative to lead the fight against global warming.

"Principle of common but differentiated responsibilities should be the bedrock of our collective enterprise. Anything else would be morally wrong," he wrote, adding: "Justice demands that, with what little carbon we can still safely burn, developing countries are allowed to grow."

India will fulfil responsibilities on climate: Modi to Obama